The towering Brock Commons, made completely from timber, were just completed, becoming the world’s biggest structure made from wood. 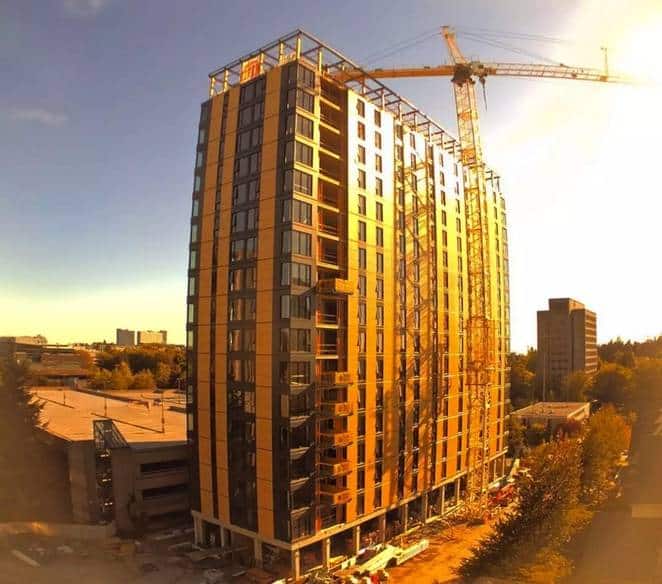 The wooden skyscraper was constructed ahead of target. Image via Acton Ostry Architects, who developed the project.

The building is part of a University of British Columbia campus, serving as a student housing hall. It will house 404 students in 272 studios and 33 four-bedroom units, and feature study and social gathering spaces for upper-year and graduate students. There will also be a ground-floor lounge and study space for commuter students. Students will pay the same for rent at the wood building as in other similar accommodations at other student residences.

The 18-story building will also serve as a proof of concept, showing that wooden skyscrapers can become a common occurrence.

Wood is a sustainable material which is not only renewable but also stores carbon dioxide instead of emitting it, like concrete buildings.

“This project should effectively demonstrate that mass wood structures can be commonplace,” said Russell Acton, principal architect on the project.

However, not all of it is built from wood. The building’s base and two cores are made of concrete, especially because regulations limit wooden buildings to six floors. After its completion, the $51.5-million residence building stands 53 meters tall (about 174 feet). The cost is a bit higher than with concrete buildings, but not by much (approximately 8%). This is not prohibitive and we can expect other wooden skyscrapers to pop up, given their environmental advantages. Furthermore, if the residence is successful and other players are attracted to the market, then increasing demand will bring down the prices, making them competitive with conventional, concrete-based buildings.

“(As) a building like this becomes a reality, it really paves the way for additional projects across the country, probably throughout North America and throughout the world,” said Lynn Embury-Williams, executive director of the Canadian Wood Council’s Wood Works BC program, who worked on the project.

John Metras, managing director of UBC Infrastructure confirmed that the construction was completed ahead of schedule. After work started in last November, it took less than a year to finish everything.

Of course, architects were eager to ease worries regarding fires, so aside from applying an anti-flammable treatment to every bit of wood used in the structure, they fit a sprinkler system at every level and encapsulated the wood in drywall and concrete.