Like a bag of chips, atoms are mostly empty space. However, a highly exotic state of matter that was recently created by a team from the  Vienna University of Technology, the Harvard University, and Rice University, Texas, flips that notion on its head — dubbed a Rydberg polaron, this giant atom is filled with other atoms. 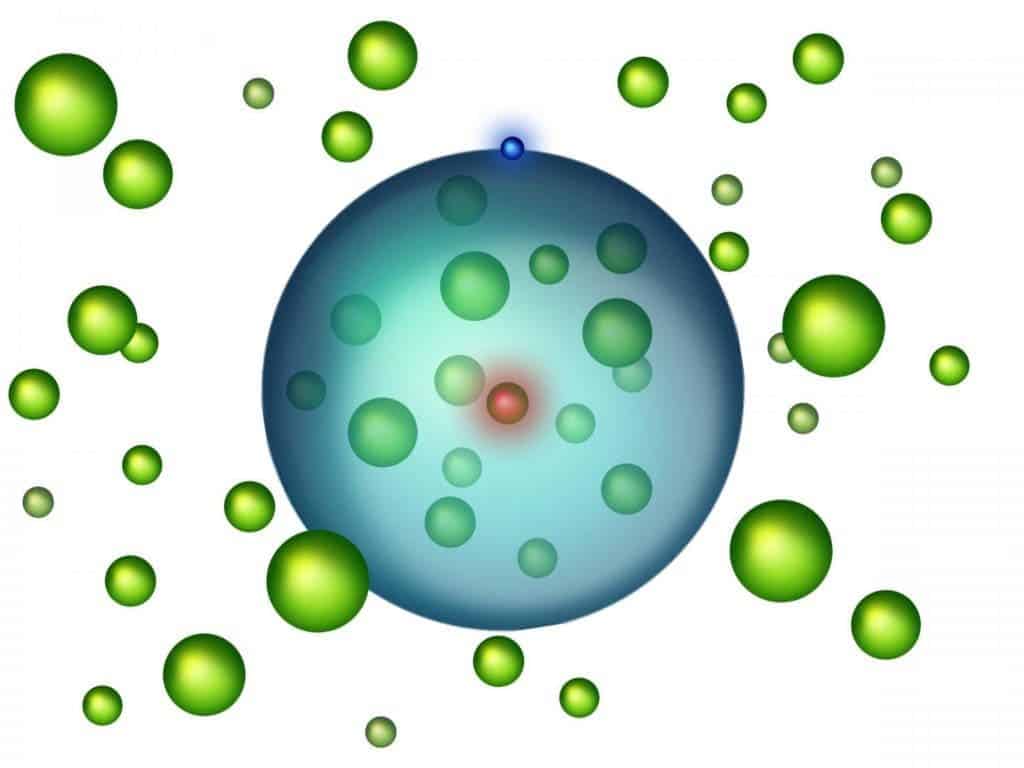 The excided electron (blue) orbits its nucleus (red), and encloses other atoms of the Bose-Einstein-condensate (green).
Image credits TU Wien.

Atoms are made up of big bits, called protons and neutrons, that coalesce at its core to make the nucleus, and tiny bits named electrons, which orbit the core at great speeds. What holds them together is electromagnetics — the protons hold a positive charge, the electrons are negatively charged, so they attract one another. Neutrons don’t carry a charge so nobody much minds them.

Between the nucleus and the electrons, there’s a wide, thick helping of nothing. Literally. As far as we know, there is only empty space between the two, which means atoms are pretty much empty space. However, an international team of researchers wants to change that.

The biggest of the small

They started out from two different, and very extreme, fields of atomic physics: Bose-Einstein condensates and Rydberg atoms. A Bose-Einstein condensate is a state of matter created from ultracold bosons — close to absolute zero, or 0° Kelvin (which is -273.15° Celsius, or -459.67° Fahrenheit). That’s cold enough that quantum processes would find it hard to continue, meaning everything is more stable, denser, and certain aspects of quantum physics become observable. Rydberg atoms are also mostly empty space, but with a twist. One of their electrons is highly excited (to read: pumped full of energy) and orbits the nucleus at a very great distance:

“The average distance between the electron and its nucleus can be as large as several hundred nanometres – that is more than a thousand times the radius of a hydrogen atom,” said Professor Joachim Burgdörfer of Vienna University, co-author of the paper, in a statement.

The team put the two together by supercooling strontium and then using a laser to transfer energy to one atom and transform it into a Rydberg atom. Because the excited electron orbited at a much longer radius than in a typical atom, and because everything was clumped in so tightly, it ended up orbiting not just its nucleus, but as many as 170 other strontium atoms that were stuck between the two.

“The atoms do not carry any electric charge, therefore they only exert a minimal force on the electron,” said co-author Shuhei Yoshida.

Even these tiny tugs can steer the electron very slightly, however, without pushing it out of its orbit. This interaction consumes part of the total energy in the system, and that’s something chemistry likes and tries to perpetuate — so a bond forms between the Rydberg atom and those caught in its orbit.

“It is a highly unusual situation,” Yoshida explained. “Normally, we are dealing with charged nuclei, binding electrons around them. Here, we have an electron, binding neutral atoms.”

This exotic state of matter, dubbed a Ryberg polaron, is only stable while everything stays close to 0° K. If things get too heated, the particles start moving faster and the bond shatters.

“For us, this new, weakly bound state of matter is an exciting new possibility of investigating the physics of ultracold atoms,” said Burgdörfer. “That way one can probe the properties of a Bose-Einstein condensate on very small scales with very high precision.”

The paper “Creation of Rydberg Polarons in a Bose Gas” has been published in the journal Physical Review Letters.