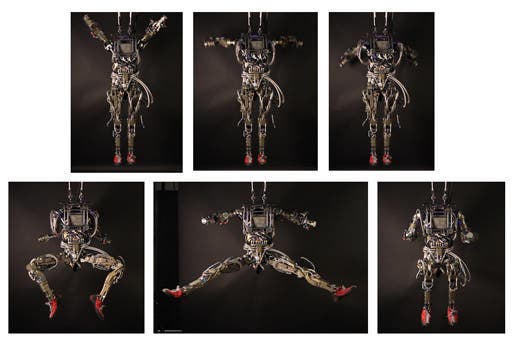 I’m pretty sure some of you went out costumed as robots this Halloween weekend, be it as Star Wars’ C3PO (there’s always one at every party, and it never gets lame) or you simply strapped on a drawn out cardboard box. Well, I hope you all had your fair share of laughs and scares, but although we’re all back to our usual boring selves the Petman robot does well in delivering  a reminiscing moment – only this time there’s no costume involved, he’s real deal.

Resembling folklore’s Sleepy Hallow, the Boston Dynamics developed bot for US Army chemical protective clothing may have a police light for a pumpkin, but this doesn’t make him any less mythically frightening. The Petman was specifically design to mimic human dynamics has close as possible, and as such he’s able to display incredibly human like physical behavior and stability. Check the video below which features the robot jogging across a treadmill, effortlessly even after a solid nudge from one of his engineers. Also, if you’re interested how a genuine push-up looks like, Petman puts 99% of us to shame.