The Amazon’s iconic freshwater dolphins are in steep decline, announced Brazilian researchers. According to them, the Amazon dolphin populations are halving every decade. 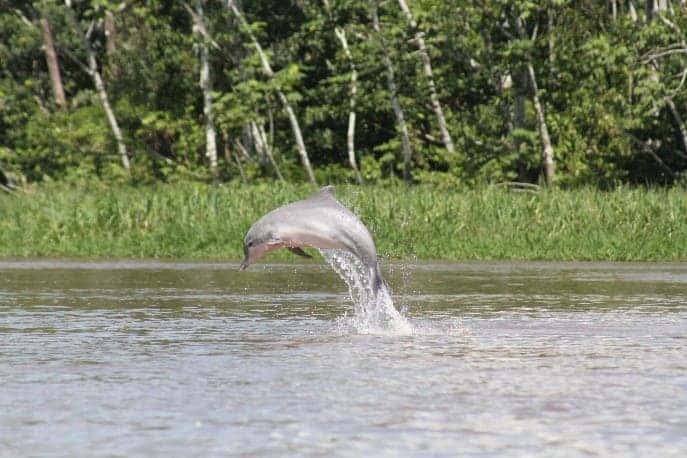 There are two species of river dolphins living in the Amazon basin: the boto (Inia geoffrensis) and the tucuxi (Sotalia fluviatilis). The boto, also known as the pink river dolphin, is famous for its pink coloring, but many people aren’t aware that it actually comes in a large variety of shades. The dolphins first start off gray but turn pink as they age, with their final hue being influenced by behavior, capillary placement, diet, and light exposure.

Pink river dolphins can be found throughout much of the Amazon and Orinoco river basins in Bolivia, Brazil, Colombia, Ecuador, Guyana, Peru, and Venezuela. They are solitary creatures who are often seen alone or in small groups of 2-4 individuals. However, they’re not shy at all. Despite living in small, tight-knit groups, these dolphins can be incredibly curious and frequently interact with humans.

They’re also very agile. Unlike other dolphins, pink river dolphins have unfused vertebrae in their necks, which allow them to turn their heads 180 degrees, enabling the animals to maneuver around tree trunks, rocks, and other obstacles.  They can also swim forward with one flipper while paddling backward with the other, letting them turn with more precision. Oh, and they’re also very brainy — they have, remarkably, 40% more brain capacity than humans.

The Amazon basin’s dolphins are considered to be relatively abundant, as far as freshwater cetaceans go. However, in recent years the animals’ numbers have declined due to dams that fragment populations but also other threats like the contamination of rivers and lakes, as well as human fishing.

In a new study published in the journal PLOS ONE, researchers at the Instituto Nacional de Pesquisas da Amazônia, Brazil, analyzed data from 22 years of surveys performed in the Mamirauá Reserve. The dolphins were surveyed by boat monthly from 1994 to 2017. During this time frame, the researchers found that both boto and tucuxi Amazonian dolphins have experienced a dramatic decline. At current rates, boto populations are halving every 10 years and tucuxi populations are halving every 9 years. These are some of the most severe rates of decline seen in cetaceans since the early days of modern whaling.

The researchers conclude that if the IUCN Red List criteria were applied to the findings, then both species would be classified as Critically Endangered. The river dolphins are already legally protected in the Amazon basin, but the authors of the new study call for greater enforcement of these laws. In 2006, the baiji or Chinese river dolphin was declared extinct. The baiji’s demise was rapid and shocking, going from a healthy population of some 6,000 animals to extinction in a few decades — nothing more than a blink of an eye.

“Without an indefinite extension and strict enforcement of this regulation, combined with observance of existing laws on gillnet use, the dolphins of the Amazon seem very likely to follow the freshwater dolphins of Asia on the path of extinction,” the authors concluded in their paper.