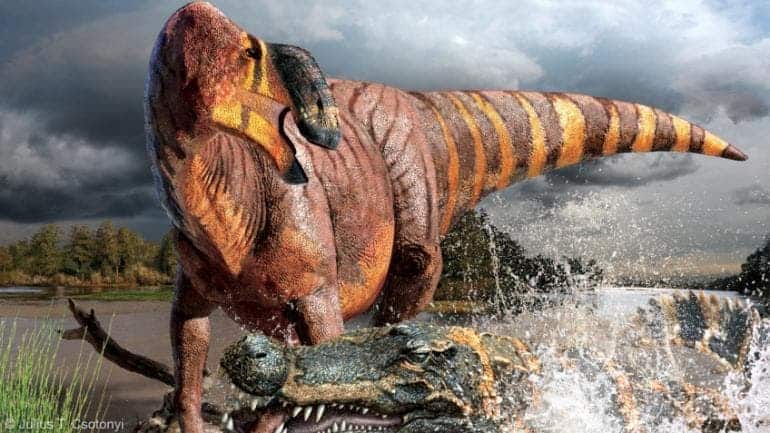 A new dinosaur species was reported by paleontologists belonging to a duck-billed class of dinosaurs called hadrosaurs. What’s interesting about the discovery is that the newly reported dinosaur used to sport an exceptionally large nose even by hadrosaur standards, yet scientists are still uncertain what purpose it served. It’s name, Rhinorex or “King Nose” gives again to show that paleontologists have a knack for stating the obvious.

Left to gather dust in a storage facility of Brigham Young University’s Museum in Provo, Utah since 1990, scientists have only recently come across the Rhinorex  fossils. Terry Gates of North Carolina State University and the North Carolina Museum of Natural Sciences is one of the members of the team that made the discovery. He describes the intricate process of extracting the fossil remains from the sandstone “like digging a dinosaur skull out of a concrete driveway.” Their efforts paid off eventually, and the researchers were able to reconstruct an almost complete skull of the specimen.

Judging from the size of its skull and in relation to other similar species, the researchers estimate an adult Rhinorex was 30 feet (9 meters) long and weighed roughly 8,500 pounds (3,000 kilograms). The dinosaur lived about 75 million years ago during the Late Cretaceous period, most likely in a swampy environment where it fed on a herbivore diet. It’s unclear, however, how its unusually large snout – the largest of any hadrosaur described thus far, and possibly the largest in prehistory – helped the Rhinorex in any way. Ironically, scientists believe the Rhinorex didn’t have that much of a keen sense of smell.

“The purpose of such a big nose is still a mystery,” Gates said in a statement. “If this dinosaur is anything like its relatives then it likely did not have a super sense of smell; but maybe the nose was used as a means of attracting mates, recognizing members of its species, or even as a large attachment for a plant-smashing beak.”

The researchers hypothesize that its may have adapted such a peculiarly large nose for knocking down plants or attracting mates. Regarding the specimen in question, the researchers believe it was killed by ancient crocodiles lurking in the swamps, as reported in the paper published in the Journal of Systematic Palaeontology.

“It seemed like a great possibility that such an attack could have caused the rapid death of a large dinosaur and helped it to be buried quickly by taking it to the bottom of a river,” Gates said. “We have evidence of giant crocodiles in the same environment as well, making the ambush attack even more tempting to speculate.”

Rivaling the Rhinorex in snout size is Qianzhousaurus sinensis also known as “Pinocchio Rex”, discovered just recently in China. It also bore a large snout, but unlike the Rhinorex, the Pinocchio Rex was a formidable predator.