A failed experiment in search of dark matter provides us with a new way to find heavy metals such as gold deep within the earth, fast. 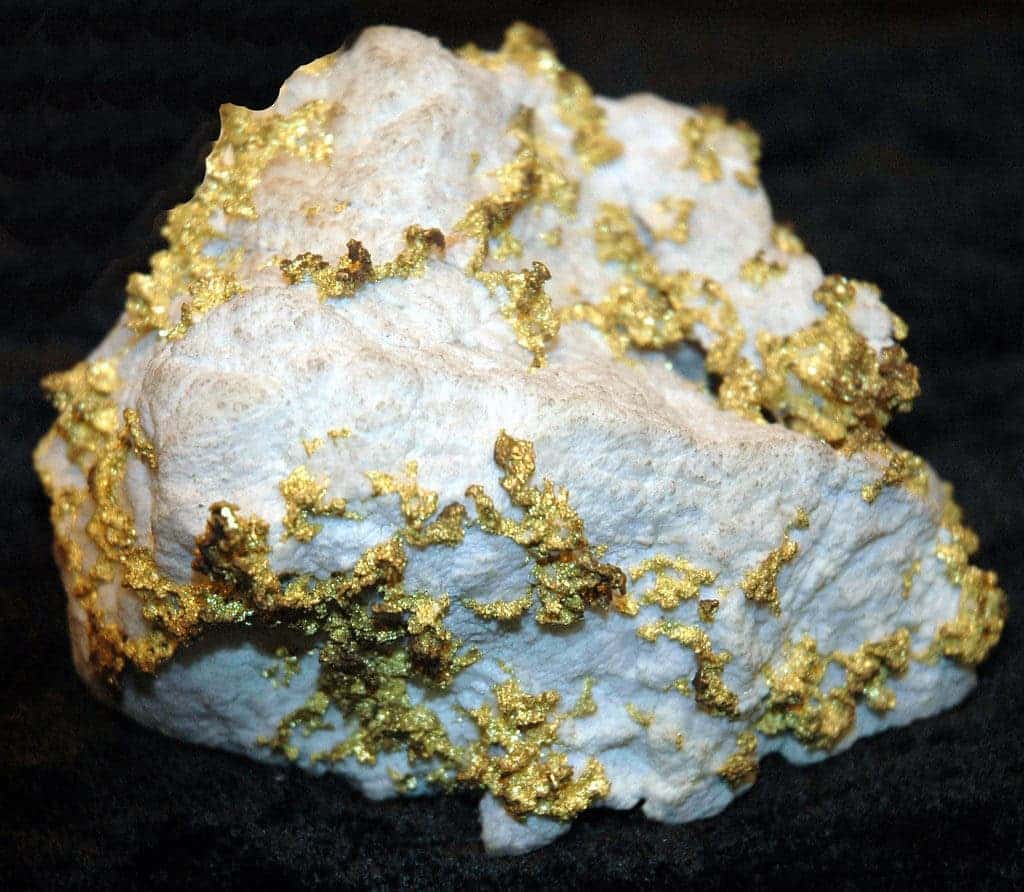 Gold formed on quartz in a hydrothermal vein. Unspecified mine at or near Grass Valley, Nevada County.
Image credits James St. John / Flickr.

Alan Duffy, an Associate Professor at Swinburne’s Centre for Astrophysics and Supercomputing (Australia) recently led an experiment to detect dark matter deep in the bowels of Australia. The experiment was part of the larger Sodium iodide with Active Background REjection (SABRE) experiment and took place in a mine in Stawell, Victoria. Unfortunately, it failed to detect dark matter.

There is a golden lining, however. The team reports that the same approach they used in their experiment can be employed to create an ‘X-ray of the Earth’ spanning from the surface down to the sensor. Effectively, the method could be employed to detect seams of heavy metals such as gold with a fraction of the effort and time needed previously.

The SABRE experiment focuses on detecting particles of dark matter, something no one has conclusively achieved yet. Because any signal from dark matter would be minuscule, the team used an incredibly sensitive sensor to make sure they’re not missing out on the signal. However, because the device was so sensitive, the team also had to find a place that’s insulated from cosmic radiation, which the sensor would also pick up.

This is why the researchers carried out their experiment one kilometer down a mineshaft, where the rock above was thought thick enough to absorb any cosmic radiation. Turns out the body of rock wasn’t enough and that radiation still penetrated to the sensor.

Not very good news for SABRE, as the incoming radiation acted as noise, spoiling the measurements. However, the team reports that this incoming radiation did provide them with a substantial, and unforeseen wealth of information: it can be used to detect heavy metals such as gold.

“Nature has given us the most powerful penetrating scanner you can create, and there’s no licence required,” said Duffy.

The particles that spoiled the team’s experiment are called muons, short-lived particles similar to electrons but some 200 times heavier. Atoms with high atomic numbers preferentially scatter muons, so deposits of heavy metals such as gold create shadows similar to bones in a medical X-ray image. The idea’s not entirely new, but Duffy notes that the technology “had come of age.”

The team redesigned and built a muon detector based on a prototype from the 1960s. The device was a bulky thing that required two people to carry it back in the day — the team’s sensor is based on many of the same technologies that enable your smartphone and is about the size of “a fashionable paperweight” in Duffy’s own words.

“The first one we built was a cylindrical piece of scintillating plastic in a paint tin. You’ve never seen anything that looked so rough and ready, but it just gave the most beautiful detections.”

Given the small size and low cost of the sensor, the team says they’re ideal to lower into mineral exploration boreholes. One course of action would be to deploy “half a dozen of them and walking away,” Duffy explains. A few short weeks later, a picture of the minerals in the surrounding rock could be reconstructed from the data.

Currently, the team wants to build a new company around the sensor. For that, they have to make the device robust enough to be used in actual mines.

“Dark matter is ethereal,” Duffy added. “It’s fundamental to physics, but it’s hard to think of practical uses. Yet I see real commercial outcomes in this spin-off.”