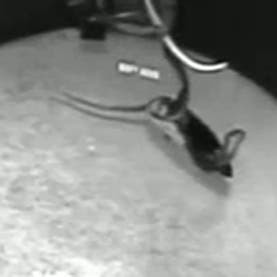 Most brain-machine prosthetic research today is focused on supplementing a missing sense, like medical devices that restore hearing or sight. In a novel research, however, scientists at  Duke University Medical Center have literally granted rodents a sixth sense after they implanted them with an experimental prototype that allows rats to “touch” invisible infrared light.

Then  the researchers fitted the rats with an infrared detector connected to microscopic electrodes that were implanted in the part of their brains that processes tactile information. Then the same experiment was repeated, only this time light was replaced by infrared, which rats, like humans, can not sense inherently. It’s worth noting that this doesn’t necessary work with infrared only. According to the researchers a new degree of sensing could be achieved with other signals as well.

“We could create devices sensitive to any physical energy,” said Prof Nicolelis, from the Duke University Medical Center in Durham, North Carolina. “It could be magnetic fields, radio waves, or ultrasound. We chose infrared initially because it didn’t interfere with our electrophysiological recordings.”

In the first tries, the rats would seemingly hit holes at random, failing to sense the correct hole, since he part of their brains that normally process touch was interpreting the electrical signals for visual cues. This theory is backed by the fact that the rats scratched their faces when infrared was switched on, indicating the animals were interpreting the lights as touch.

However, after a while the rats’ behavior gradually changed, until all rants would sense the correct hole every time – remember, the sequence was always random.

“This is a very nice paper that clearly demonstrates the great potential of even the primary sensory cortex, even in a rat, to use completely new information when delivered to the cortex in electrical pulses,” says Jon Kaas, a professor of cell and developmental biology at Vanderbilt University and an expert on sensory and motor system organization. “The authors correctly see that this method of delivery can be used to replace lost sensory inputs and to provide new sensory abilities.”

If the same effects could be transferable to humans with a similar set-up, the possible prospects would be extremely interesting. Imagine being able to sense some forms of energy just as well as you fell temperature for instance, how would you interpret this new feeling?

Check out the video below that shows the rats sensing infrared.

The findings were reported in the journal Nature Communications.