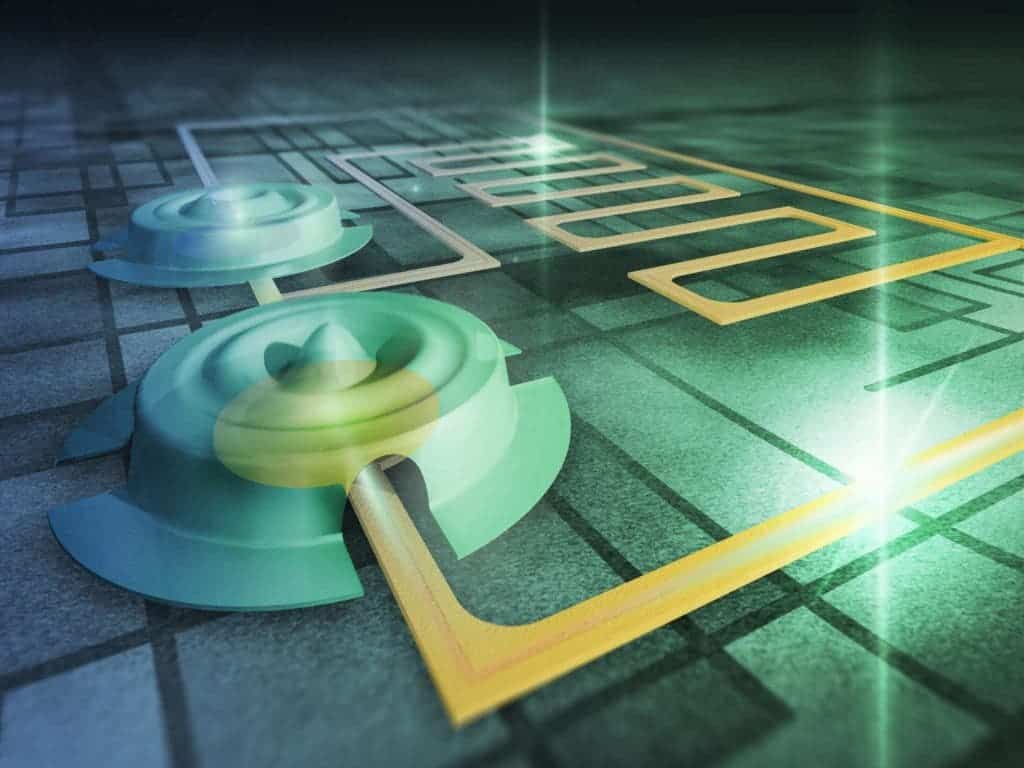 Illustration of the 15-micrometer-wide drumheads prepared on silicon chips used in the experiment. The drumheads vibrate at a high ultrasonic frequency, and the peculiar quantum state predicted by Einstein was created from the vibrations. Credit: Aalto University.

Physics deals with its fair share of strangeness and — let’s be honest here — that’s especially abundant in quantum theory. However, you’ll be challenged to find a weirder, more counter-intuitive concept than quantum entanglement, the phenomenon in which the quantum states of two or more objects are intertwined such that they have to be described with reference to each other, even though the individual objects may be spatially separated.

Even if you separate entangled particles by billions of miles, changing one particle will induce a change in the other. This information appears to be transmitted instantaneously, with no violation of the classical speed of light because there’s no “movement” through space.

When Albert Einstein first spoke about quantum entanglement in 1935, he famously called it “spooky action at a distance.” But although quantum entanglement is still very strange, at least scientists are no longer strangers to it. Physicists have so far shown how quantum entanglement works over various distances both on land and in space. Most recently, a Chinese satellite entangled particles over 1,200 km apart, paving the way for the future’s quantum communication and quantum encryption networks.

The problem with entanglement is that it’s very fragile, as the conditions necessary to maintain the quantum state can be challenging. What’s more, entanglement has only been demonstrated in microscopic systems such as light or atoms — that’s, until recently, when an international team of researchers showed how to generate and detect entanglement of macroscopic objects.

The researchers led by Prof. Mika Sillanpää at Aalto University in Finland entangled two individual vibrating drumheads made from metallic aluminum. Each drumhead had a diameter the size of a human hair, making it huge by quantum standards.

“The biggest challenge was the theoretical understanding of the data. We measured the data exactly two years ago, but it is published not until now! This is because it was so demanding to develop the proper theoretical model. When we took the data, we had no idea if we are entangled or not. It was a great moment later to find out that all features of the data were explained by the new modeling,” Sillanpää told ZME Science.

In order to entangle the two bodies, the researchers forced them to interact via a superconductive microwave circuit, whose magnetic fields absorb all the thermal disturbances — thus removing noise — and leave behind only the quantum mechanical vibrations. It’s with these high ultrasonic vibrations that the scientists entangled the drumheads. All of this occurred at a temperature near absolute zero, -273 °C, where molecular motion almost grinds to a halt.

Quantum entanglement between the large bodies was maintained for up to half an hour. When asked if there is any limit to how large any two objects can be for them to become entangled, Sillanpää said that there are no fundamental limits but, practically, gravity might “collapse” the quantum properties of objects that are too large.

“How large, is totally unclear. There are, however, limits that in practice are fundamental: Let us consider for example, a cat-size object that is in a quantum state of being at the same time in two places that are spaced by centimeters. Now, the neutrino irradiation (which is impossible to avoid because even the Earth is transparent to neutrinos) from the Sun will destroy such a quantum state in about a pico-second (one millionth of a micro-second), so such states do not appear in nature.”

This exciting research will prove very important in the forthcoming quantum technology revolution. The results show that it is possible to generate and stabilize exotic quantum states in large mechanical objects, enabling all sorts of new opportunities like novel quantum technologies and sensors that might revolutionize research in fundamental physics. Perhaps research in the future attempting to teleport mechanical vibrations might offer some very interesting surprises.

“To build a quantum internet that will connect distant quantum computers, one needs entangled particles or objects. The vibrating drumheads can serve as such components that convert the quantum bits in a processor into the flying quantum information. In fundamental research, one could improve the sensitivity of the existing gravitational wave detection systems,” Sillanpää explained.

“Nature can be more awesome than you could ever imagine!” the physicist concluded.