Love is complicated enough, even without intense scrutiny from scientists. Do we fall in love with someone because we find our partner’s genetic makeup to be satisfying and thus improve the chance of having better offspring? Or is it a bit more mysterious than this – a lot more personal? For humans, the latter looks like the case, but we’re far from being alone. Zebra finches, which are also monogamous, choose their mates for idiosyncratic reasons as shown by researchers at the Max Planck Institute for Ornithology. The finches who chose their partners based on behavioral compatibility were less likely to shrug from their parental duties and had offspring which had the best chance of reaching adulthood. This elegant experiment proves that choosing a mate isn’t all about who has the brightest plumage or the biggest stomach – love has a huge part to play as well. The similarities to humans are uncanny. 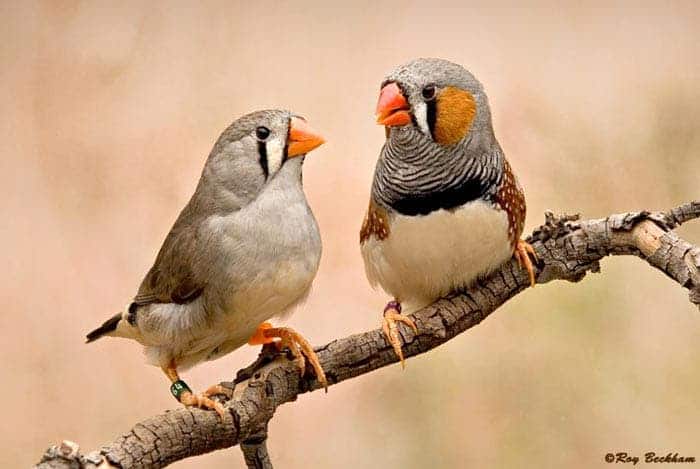 Malika Ihle, the lead author of the study, collected 160 zebra finches from the wild and split them into four groups made of 20 males and 20 females each. Left free to roam, the birds soon bonded and chose their prospective mates. Already, the researchers could not spot a pattern.  A female could be interested in a certain male with a flashy plummage, but another was not – she might have been more interested in males who share the same drive for exploring, for instance. Then, the researchers played dominating parents and split the birds again into two groups. Half were allowed to stay with their chosen partners, while the other half was split again into different groups in which their partners  were arranged. Because the finches are monogamous, the researchers had to trick the birds that their partner was dead.

To ensure statistical relevancy, the researchers once again split the birds. Two-thirds of the zebra finch pairs from the first breeding season were broken up and these individuals were placed into an aviary where they again chose a new partner. One-third of the birds who had either chosen their partners or had it arranged were allowed to breed per usual. 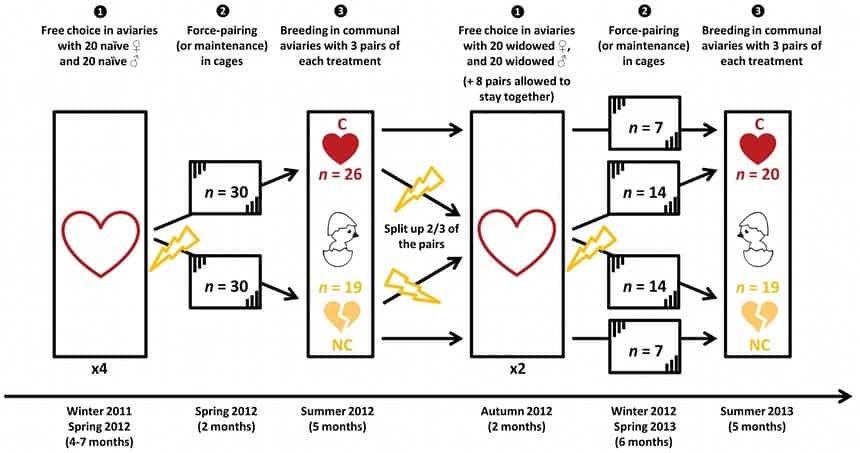 During this whole time, the researchers studied an extensive library of recorded material (1,424 hours of video and 285 hours worth of direct observations). They found the females in arranged marriages had sex less often and their nests had nearly three times as many unfertilized eggs as the free-choice pairs. As for the males, these were much more likely to skip their parental duties and visited the nest less frequent. Strikingly, the final number of surviving chicks was 37 per cent higher for individuals in chosen pairs than those in non-chosen pairs, as reported in PLOS Biology.

“If a chick hatched in such a nest, it only had a 50% chance of surviving.”

To rule out direct genetic benefits, the researchers tricked the birds and swapped eggs from the arranged and self-paired nests. They found the rates of embryo mortality between both free-choice and assigned pairs did not differ, suggesting the birds did not choose their partners based on genetic benefits, nor was the striking difference in offspring survival based on genes. Chicks survived more often in self-made pairs because the parents cared more and were both involved in parenting. The missing ingredient – the glue that holds everything together – might be love.

That’s not to say that genetics don’t play a role – it’s evolutionary essential, after all. Females and males might choose their mates based on superior traits, but not always. All things being almost equal (a diseased male or female will have little luck with “love”), there’s a second important element: parental compatibility. What this means is that those individuals with the best genes and the flashiest behavior are not necessary the best mates for all individuals in the population. The more unique and idiosyncratic an individual is (in this case a zebra finch or human), the more important this ‘click’ becomes in forecasting a fruitful relationship that bears fit young.

The next step for Ihle and colleagues is identifying how exactly parent compatibility leads to better care. Ultimately, research like this might one day unravel the secrets of love. What evolutionary forces shaped it and how? Is there more to it than just producing better offspring?

“To me, love is a peculiar attraction toward a specific individual that is not necessarily shared by other choosing individuals,” Dr Ihle says. “It seems that the chosen pairs, those ‘love marriages,’ invested more into reproduction, were more committed, more faithful, and more motivated to raise their family.”