“We women talk too much, nevertheless we only say half of what we know.”  Nancy Witcher Astor, Viscountess 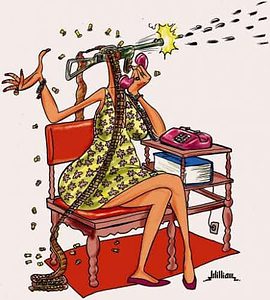 There’s a deeply entrenched stereotype that portrays women as extremely talkative or, at least, much much chatty than men. Ask most people, both men and women, they will agree, but is this merely a subjective facet or does it indeed reflect reality? A new study teases out a more accurate picture on the matter. Researchers at Northwestern University found that in the end it all boils down to context, and that in some cases men are the real chatterboxes.

The communication patterns or both men and women have been of great interest to researchers, but so far studies have turned in mixed results and have made the matter controversial. For instance, a University of California study from 2007 that made a meta-analysis of previously published studies investing men and women communication patterns found that in fact men are the most talkative. Older studies report that women chat more, while others report that there’s no actual difference. It’s very confusing, and like most psychological studies the mixed results stem from an inconsistent common frame of reference. Some studies rely on self-reporting (subjectivity limitation), while others make direct observations (the ‘being-watched’ syndrome that causes people to act and respond differently).

North­eastern pro­fessor David Lazer and his team took a different approach. Making use of the technology at their disposal, the researchers employed “sociometers” – wearable devices roughly the size of a smartphone that quantify social interactions. These were fitted to 79 students and 54 call-centre employees who were involved in two distinct social settings: a University environment where the participants were divided into groups and asked to  work on a project, and a work situation in which employees were tracked during twelve one-hour lunch breaks.

During the task-based, university setting conversations were dominated by men and women, in turn, depending on how large the group was. When the groups consisted of six or more participants, it was men who did the most talking, whereas women spent more time than men speaking with just one or two other people when the task was collaborative (62% more talkative than men). During the lunch-break setting, women were found to be slightly more likely than men to engage in conversations, both long and short-duration. This reported difference, however, is so slight that the researchers couldn’t infer which of the two genders was definitely more talkative.

“In the one set­ting that is more col­lab­o­ra­tive we see the women choosing to work together, and when you work together you tend to talk more,” said Lazer, who is also co-​​director of the NULab for Texts, Maps, and Net­works, Northeastern’s research-​​based center for dig­ital human­i­ties and com­pu­ta­tional social sci­ence. “So it’s a very par­tic­ular sce­nario that leads to more inter­ac­tions. The real story here is there’s an inter­play between the set­ting and gender which cre­ated this difference.”

Where does the notion that women ‘fill the air’ come from then? It is possible that this stereotype forms during childhood. Girls language skills develop earlier, enabling them to become articulate at a younger age, and it may be possible that this notion stuck with us ever since we were very little. This idea, too, seems to be flawed as studies have failed to report a significant difference in the amount of spoken words by gender in children.

While men and women are indeed biologically and, in some instances, cognitively different, it may be the case that we’ve been brainwashed by society into exaggerating the gender gap. Then again, maybe men are really from Mars and women from Venus.

The findings were reported in the journal Scientific Reports.