Armed with almost 1 million diary entries, an Oxford-based laboratory is trying to figure out why modern life seems so hectic. Is it really, or is it a matter of perspective?

In the early 1960s, televisions were making their big breakthrough. In the UK and the US everybody and their grandma was buying a TV so the BBC wanted to know what were the best times to air its programmes. They decided to conduct a nation-wide study and asked almost 2,500 people to write in a diary what they’re doing every half an hour, and to indicate whether the TV or radio is on.

The result is a sum of entries like “8 a.m., Eating breakfast,” read one; “8.30 a.m., Taking children to school; 9 a.m., Cleaning away, washing up and listening to Housewives’ Choice” — a popular radio record-request programme of the day. So why is this significant now?

Well, the Centre for Time Use Research at the University of Oxford, UK gathered these results and many others like them in order to see what people really do with their time – and whether or not modern life is as hectic as we generally consider it. They gathered similar diaries from 30 countries, spanning more than 50 years and cover some 850,000 person-days in total.

“It certainly is unique,” says Ignace Glorieux, a sociologist at the Dutch-speaking Free University of Brussels. “It started quite modest, and now it’s a huge archive.”

While analyzing the results is still a work in progress, some results are already apparent: first of all, we’re not busier now than we used to be.

“We do not get indicators at all that people are more frantic,” says John Robinson, a sociologist who works with time-use diaries at the University of Maryland, College Park. In fact, when paid and unpaid work are totted up, the average number of hours worked every week has not changed much since the 1980s in most countries of the developed world. 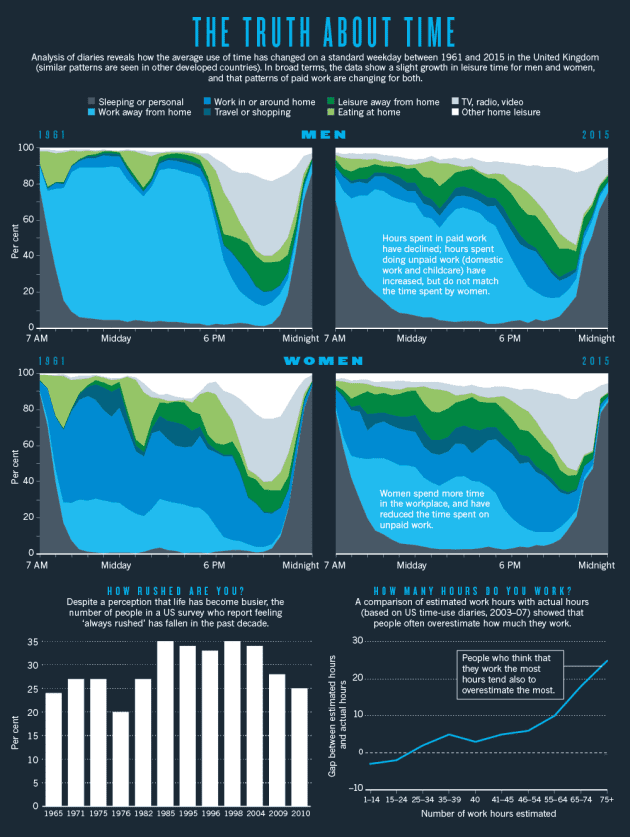 So if we aren’t actually busier, then why do we feel like we’re busier? Well, for starts, it could be us that’s to blame. People tend to grossly overestimate how much they work, in the United States, by some 5–10% on average. Those who work very long hours tend to overestimate even more: for example, people who guess that they work 75-hour weeks, for example, can be over by more than 50%. Similar patterns have been reported in Europe.

But some demographics are indeed working longer than they did a few decades ago. Single parents are the ones that stand out the most – they put in extraordinarily long hours, compared to the majority. The other category is well educated professionals. It’s especially the societal and work pressure that makes these people work in more than they used to.

“The combination of those pressures has meant that there is this group for which time pressure is particularly pertinent,” says Oriel Sullivan, a sociologist who now co-directs the centre with sociologist Jonathan Gershuny.

This collection is also a gold mine for physicians. Not only will it allow us to better understand how our time management has changed over the years, but it will provide insight into some health conditions exacerbated by the modern lifestyle. The diaries “were the greatest asset I could possibly have”, says physiologist Edward Archer at the University of Alabama at Birmingham, who used the data in a 2013 study of obesity. He found that modern, sedentary activities (most notably sitting in front of a computer) were among the main factors contributing to widespread obesity in the developed world. The team estimated that working women today are burning some 130 kilocalories per day less than those in the 1960s.

Now, the team is trying to increase their collection, adding entries from countries such as China, India and South Korea. Then, they can examine cultural differences and see what trends are universal, and estimate how things will develop in the future. There is an abundance of data, and it will definitely take a lot of time to analyze it all.