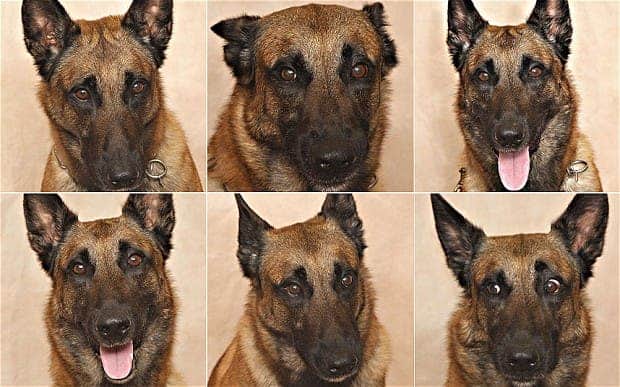 A recent study that asked human participants with minimal experience with dogs to judge the latter’s facial expression showed that we have an inherent ability to empathize with canines. Humans and dogs have been evolving side-by-side for the past 100,000 years and the study suggests that we are capable of judging a dog’s emotions similarly if not precisely as well as those of other people. It’s yet unclear, however, if this relation is special with dogs or if humans can assess just well emotions in other mammals or animals.

Study participants were divided into two groups: dog owners and those who have had minimal interactions with dogs. The participants were presented with photographs of a police dog named Mal, a five-year-old Belgian shepherd dog, under various emotional states like happy, sad, angry, surprised or scared.

“Although humans often think of themselves as disconnected or even isolated from nature, our study suggests that there are patterns that connect, and one of these is in the form of emotional communication,” she continued.

The study’s findings show that the easiest to recognize emotion was happiness, with 88% of the volunteers identifying it correctly, followed by anger with a 70% success rate. More subtle emotions like fright or sadness, that are most easily confusing, had a lower success rate of 45% and 37%, respectively. Surprise and disgust were the hardest to spot, with only 20 per cent of the volunteers recognising surprise and just 13 per cent recognising disgust.

What’s interesting to note is that out of the 50 study participants, those who had minimal dog experience were better at judging disgust and anger than seasoned dog lovers. The psychologists believe that dog owners are less convinced of a dog’s aggressive stand and are more likely to confuse the emotion with playfulness. Also, since the inexperienced human participants were better judges, this suggests reading dogs’ faces comes naturally, rather than being a learned skill.

The researchers state that more studies are required in order to assess if human empathy with dogs is based on a special relationship between the two or something shared with all mammals. Dog lovers are definitely rejoicing at the findings, nevertheless.

“I am not at all surprised that science has finally accepted what we knew all along — dog and owner communicate perfectly well without words,” said Beverley Cuddy, the editor of Dogs Today.

A few weeks ago we reported on a study that this time assessed the human-canine relationship from the dogs’ point of view. The study was published in the journal Behavioral Procedures.