Known to feed mainly on seals, the images Jon Aars at the Norwegian Polar Institute captured of a polar bear dining on dolphins is a “culinary” first for the species. The photographs were taken in the Norwegian High Arctic, mid-April 2014. The bear was seen feeding on the carcass of one white-beaked dolphin, and covering another with snow. 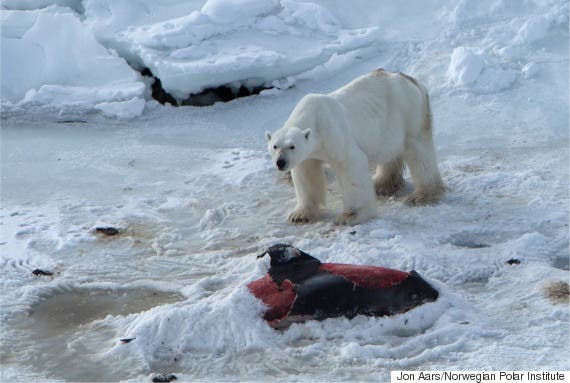 “We think that he tried to cover the dolphin in snow in the hope that other bears, foxes or birds would have less of a chance of finding it. Maybe to be able to eat it a day or two later, once he had digested the first one,” said Aars.

Jon Aars published his findings in the June 1 issue of Polar Research, remarking that in the following ice-free summer and fall seasons they discovered another seven carcasses, believed to have been scavenged on by six bears.

Although they are a regular sight in the Norwegian Arctic during the summer when the ice has melted, they have never before been observed so far north during the other seasons, when the waters are still covered in ice. 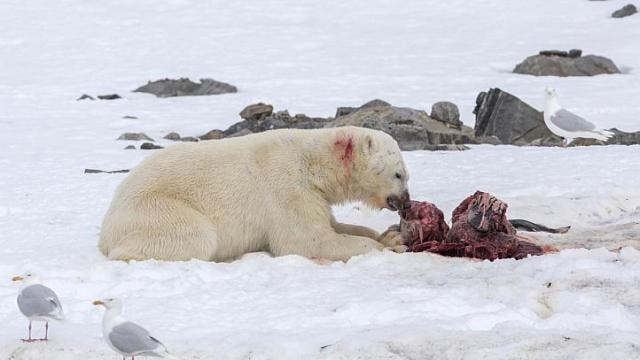 But Norwegian scientists have reported two almost ice-free winters in recent years, which they believe could have attracted the mammals further north, and became trapped by dense ice blown into a fjord by strong north winds. Coupled with the strong retreat of ice all around the Arctic region, and with it, that of the seals that make up bears’ primary source of food, the dolphins were invited to dinner.

“They will eat any marine mammal given a chance,” Ian Stirling of the University of Alberta in Canada told New Scientist. “The bigger surprise was that the dolphins were entrapped before they could migrate south for the winter.”

Aars states that the bear likely used the same hunting techniques it used to catch seals, waiting for the animal to surface through a hole in the ice to breathe. “Even if they saw the bear, the dolphins did not necessarily have any other choice,” he said.

“I don’t think that this signifies a great upheaval” in the diet of the carnivores, said Aars. “It’s just that the polar bear is coming into contact with species they have not been used to meeting until now.”