Scientists have found a supermassive black hole that seems to have bit more than it can chew. At the center of a galaxy some 300 million light years away from Earth, the black hole is straining to absorb the mass of a star it recently collapsed, “chocking” on its remains. 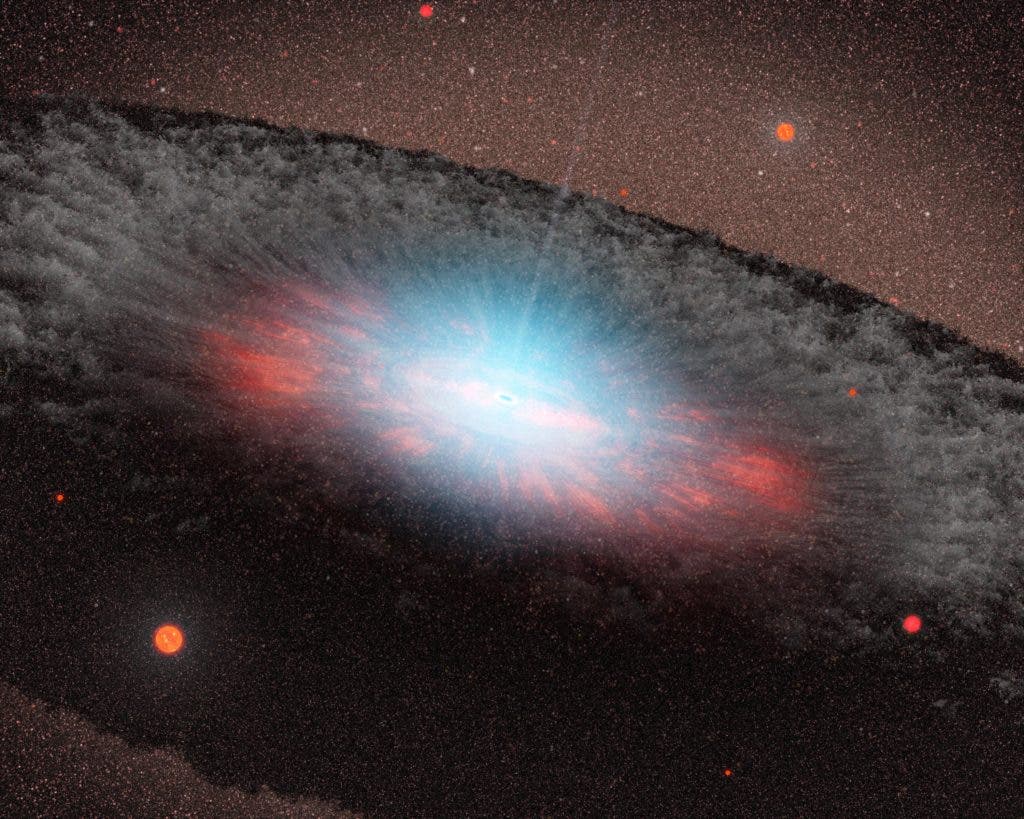 Artist’s impression of a supermassive black hole at a galaxy’s center. The blue color represents radiation pouring out from material very close to the black hole.
Image credits NASA/JPL-Caltech.

A team of researchers including members from MIT and NASA’s Goddard Space Flight Center have recently reported picking up on a peculiar “tidal disruption flare”, a massive burst of electromagnetic energy released when a black hole collapses a hapless star. The flare, named ASASSN-14li, first hit our sensors on Nov. 11, 2014, and researchers have since pointed all kinds of telescopes towards the source to learn as much as possible about how black holes evolve.

Led by MIT postdoc at the Kavli Institute for Astrophysics and Space Research Dheeraj Pasham, the team looked at data obtained with two different telescopes and found a strange pattern in the energy levels of the flare. As the supermassive black hole (I’ll just call it a SBH from not on) first began absorbing the former star’s matter, the team picked up on slight variations in the visible and ultraviolet intervals of the electromagnetic spectrum. Which in itself isn’t that weird — we’ll get to it in a moment. But the same pattern of fluctuations was picked up again 32 days later, this time in the X-ray band.

A flare of gluttony

So first off let’s get to know what these flares are and how they usually behave.

As I’ve said, tidal disruption flares are huge bursts of energy released when a black hole’s immense gravitational pull rips a star apart. The bursts propagate all over the electromagnetic spectrum, from radio, visible, and UV all the way to X-ray and gamma ray intervals. They’re pretty rare, so we didn’t witness that many of them despite the fact that they really stand out. But when we do, it’s a dead give away for hidden black holes — which would be almost impossible to spot otherwise.

“You’d have to stare at one galaxy for roughly 10,000 to 100,000 years to see a star getting disrupted by the black hole at the center,” Pasham, who’s also the paper’s first author, says.

“Almost every massive galaxy contains a supermassive black hole. But we won’t know about them if they’re sitting around doing nothing, unless there’s an event like a tidal disruption flare.”

So in a way we were lucky, but our sensors were also ready for it. The ASASSN-14li flare was picked up by the ASASSN (All Sky Automated Survey for SuperNovae) network of automated telescopes. Soon after, researchers pointed other telescopes towards the black hole, including the X-ray telescope aboard NASA’s Swift satellite — designed to monitor the sky for bursts of extremely high energy. 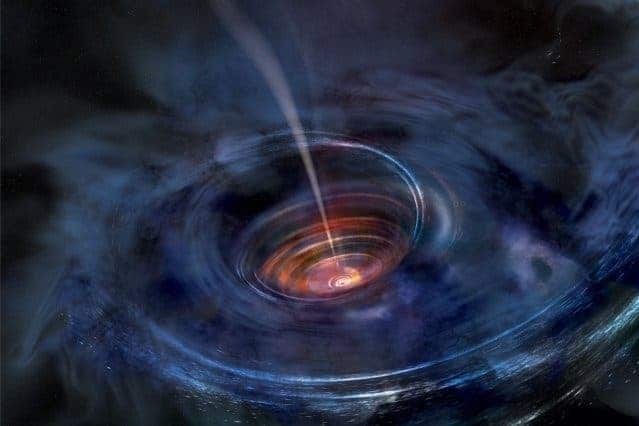 “Only recently have telescopes started ‘talking’ to each other, and for this particular event we were lucky because a lot of people were ready for it,” Pasham says. “It just resulted in a lot of data.”

By looking at all the data they gathered on the event, Pasham and his team answered a long-standing mystery: where did these bursts of light originate in flares? By modeling a black hole’s dynamics, scientists have previously been able to explain that as a black hole rips its star apart, the resulting material can produce X-ray emissions very close to the event horizon. But the source for the visible and UV light proved elusive.

The team studied the 270 days after ASASSN-14li was first detected, with particular emphasis on the X-ray and optical/UV data taken by the Swift satellite and the Las Cumbres Observatory Global Telescope. Two broad peaks in the X-ray band were identified (one around day 50, and the other around day 110), and one short dip (around day 80). This was the exact same pattern they recorded for the visible/UV spectrum just 32 days earlier.

Their next step was to run simulations of the flare produced by a star collapsing next to a black hole and the resulting accretion disc (similar to how planets get them) — along with its presumed speed, size, and the rate which material falls onto the black hole.

The results suggest these energy fluctuations are a kind of electromagnetic echo. After the star was torn apart, its remains started swirling the supermassive black hole. As it drew nearer to the event horizon, the cloud of matter accelerated and became more tightly packed, releasing bursts of UV and visible light when its particles collided at high speeds. As the matter was pulled closer to the black hole it got even faster and denser, which also made it heat up. In this excited state of matter close to absorption into the event horizon, the collisions produced X- and gamma ray bursts instead of the lower-energy visible and UV bursts.

In the case of ASASSN-14li, this process happened much more slowly that usually because the great quantity of matter proved a bit too much for the black hole to chew in a single bite.

“In essence, this black hole has not had much to feed on for a while, and suddenly along comes an unlucky star full of matter.” Pasham explains. “What we’re seeing is, this stellar material is not just continuously being fed onto the black hole, but it’s interacting with itself — stopping and going, stopping and going. This is telling us that the black hole is ‘choking’ on this sudden supply of stellar debris.”

“For supermassive black holes steadily accreting, you wouldn’t expect this choking to happen. The material around the black hole would be slowly rotating and losing some energy with each circular orbit,” he adds.

“But that’s not what’s happening here. Because you have a lot of material falling onto the black hole, it’s interacting with itself, falling in again, and interacting again. If there are more events in the future, maybe we can see if this is what happens for other tidal disruption flares.”

The full paper “Optical/UV-to-X-Ray Echoes from the Tidal Disruption Flare ASASSN-14li” has been published in the journal Astrophysical Journal Letters.