Heat engines, whether they’re as big as a five-story building or as small as an atom, operate using the same thermodynamic processes. This was proven by  Johannes Roßnagel at the University of Mainz in Germany who made a single calcium-40 atom behave like a Sterling engine. Nothing short of amazing!

The atom that could! 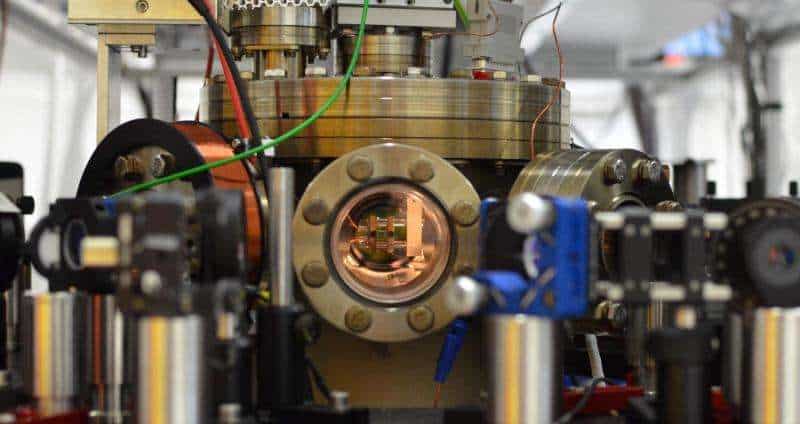 Researchers managed to make an atom behave like a heat engine, but it took machinery the size of a room to get there. Captioned is a vacuum chamber containing the atom. Credit: AG Quantum

Previously, another team from Germany at the  University of Stuttgart demonstrated a Stirling engine that was only 3 microns across.  Roßnagel really took it to a whole new level by trapping the Calcium atom in  a cone of electromagnetic energy, which you can imagine as the engine’s housing. He then fired two lasers onto each end of the cone. At the tapered end, the laser heated the atom while the other cooled the base.

Heating or cooling the electromagnetic field expands or contracts the size of the atom — better said, its area of probabilistic distribution where the atom can exist. The hot and cold oscillations create energy which can be harnessed if you put another ion by the cooler side, acting like a flywheel.

A four-stroke internal combustion engine that virtually every vehicle today uses relies on four distinct piston strokes: intake, compression, power and exhaust. Roßnagel’s engine compresses then heats, expands then cools. It behaves more like a Stirling engine which works, in principle, by heating and cooling a single cylinder. When he measured the energy output of the atomic motor, he measured 1.5 kilowatts per kilogram or roughly the same as a four-stroke car engine, as reported in Science.

“The output power of the engine is used to drive a harmonic oscillation. From direct measurements of the ion dynamics, we were able to determine the thermodynamic cycles for various temperature differences of the reservoirs. We then used these cycles to evaluate the power P and efficiency η of the engine, obtaining values up to P = 3.4 × 10–22 joules per second and η = 0.28%, consistent with analytical estimations. Our results demonstrate that thermal machines can be reduced to the limit of single atoms,” the researchers write.

Theoretically, you could shrink this even further by using an electron instead of an atom but there’s not much point to it.

“I don’t see a direct application for this engine. We do fundamental research and try to get a better understanding of thermodynamics of single particles,” he says. Still, “this improved understanding can (and will, I’m convinced) lead to a next generation of experiments and to future devices which will be interesting for various applications,” Roßnagel says. Maybe future robotic parts or single-atom refrigerators?

“[We now know] it is possible to realize a heat engine with a single atom,” he says, “while maintaining the same working principles as for macroscopic engines.”

3 thoughts on “The smallest heat engine ever is atom-sized”