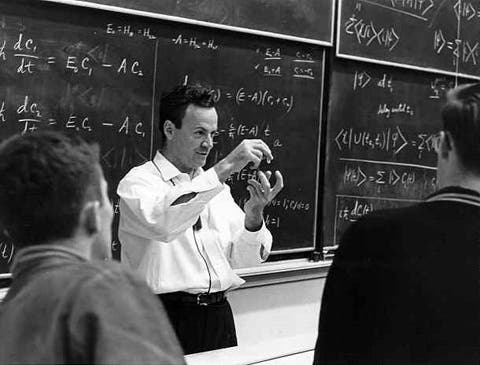 Arguably the sexiest man in physics, Richard Feynman is one of the most well known scientific personalities. Along with two other physicists, Feynman was awarded the Nobel Prize in Physics in 1965 “for their fundamental work in quantum electrodynamics, with deep-ploughing consequences for the physics of elementary particles” — specifically for the development of “Feynman diagrams.”

There are many physicists who have made remarkable contributions to science, yet what made Feynman so special was his uncanny ability to communicate his findings and physics in general. Feynman was at times called “The Great Explainer” because of his skill at making complex subjects accessible to students, and while still a professor at Caltech he released his now famous Feynman Lectures on Physics. The three-volume collection has since become the most popular physics text book. Now, the whole collection is available for free, online for your personal consideration.

If you’ve ever been discouraged by physics classes, but would still like to dabble, look no further. Study these notes with care and patience and you’ll be amazed how easy it is to understand physics, be it classical thermodynamics or spooky quantum mechanics. Seriously, you’ll be surprised!