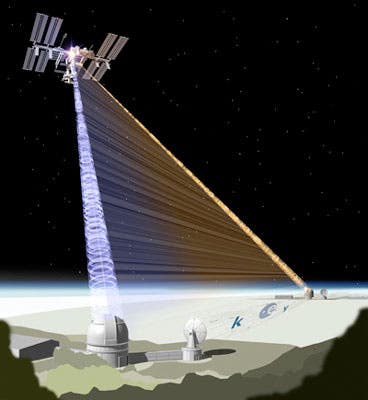 Artist’s conception shows the International Space Station in the midst of an experiment in quantum entanglement.
CREDIT: ESA

One of the most mysterious, and weirdest at the same time, phenomenae in quantum physics is quantum entanglement, in which two connected particles can share information instantly despite being separated, no matter the distance. Two particles, or so the theory holds, could be parted by light years in distance and still reflect each others’ stances instantly, an oddity which prompted Einstein himself to refer to quantum entanglement as “spooky action at a distance.” Now, a group of physicists have proposed to set up an experiment aboard the International Space Station that would test quantum entanglement over the longest yet.

So far this weird display of quantum physics has only been tested in labs over relatively short distances. A while ago, ZME Science reported  how scientists used quantum entanglement to ferry photons – particles of light – over a distance of 143 kilometers, across two Canary islands. As explained in a proposal published by the Institute of Physics and the New Physics Journal, physicists now intend to triple the distance by devising an experiment on the ISS, which orbits about 400 kilometers above the planet.

“According to quantum physics, entanglement is independent of distance,” physicist Rupert Ursin of the Austrian Academy of Sciences said in a statement. “Our proposed Bell-type experiment will show that particles are entangled, over large distances — around 500 km — for the very first time in an experiment.”

Maybe you’re a bit confused by now. My recommendation is you check this youtube video embedded below for a rough, but effective explanation of this peculiar quantum effect.

The researchers suggest deploying a photon detection module to the International Space Station, where it could be attached to an existing motorized Nikon 400 mm camera lens, which observes the ground from the space station’s panoramic Cupola window. Once this setup is complete, scientists on the ground will entangle pairs of photons and send individual entangled photons to the orbiting experiment. If indeed the photon pairs are entangled, then a change to the properties of one of the particles, say that on ground, will immediately mandate the same change in its pair.

“Our experiments will also enable us to test potential effects gravity may have on quantum entanglement,” Ursin said.

If the experiment proves to be successful, then the ISS could be turned into a sort of quantum entanglement relay point in order to send a secret encryption key far above the planet’s surface, forming the basis for a worldwide quantum network. In theory, information encrypted with quantum entangled keys are unbreakable, so you can imagine the benefits and interests.