A team of researchers from University of Wisconsin-Milwaukee (UWM) has revealed how the atomic structure of proteins changes during photosynthesis using an X-Ray laser which captures snapshops with unprecedented temporal resolution. 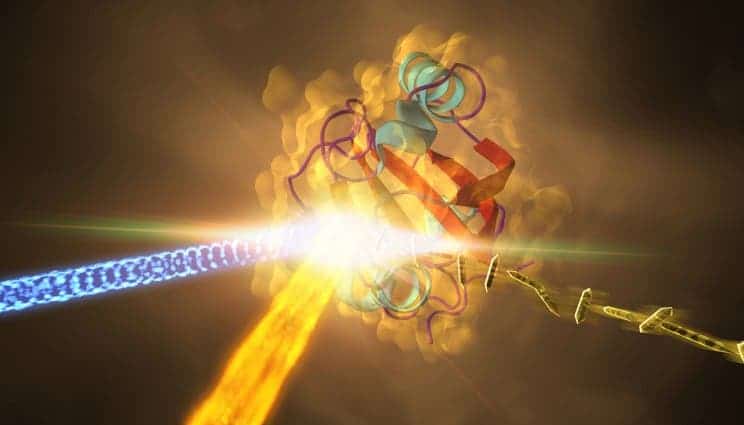 This artist’s rendering depicts an experiment at SLAC that revealed how a protein from photosynthetic bacteria changes shape in response to light. Samples of the crystallized protein (right), called photoactive yellow protein or PYP, were sprayed into the path of SLAC’s LCLS X-ray laser beam (bottom left). Some of the crystallized proteins had been exposed to blue light (left) to trigger shape changes. Diffraction patterns created when the X-ray laser hit the crystals allowed scientists to re-create the 3-D structure of the protein (center) and determine how light exposure changes its shape. Image courtesy of SLAC National Accelerator Laboratory.

As if conventional lasers weren’t awesome enough, scientists invented X-Ray lasers – which use stimulated emission to generate or amplify electromagnetic radiation in the near X-ray area of the spectrum, usually on the order of tens of nanometers wavelength. To put it simply – you can use X-Ray lasers to visualize extremely small things, like proteins or even atoms for example.

Physics professor Marius Schmidt and doctoral student Jason Tenboer used this tool to study biology, unraveling what Schmidt calls “some of the grand challenges of biology” – unmasking protein structures which have never been seen before, determining (among others) how they work together and how they achieve one of the most common yet intriguing natural phenomena: photosynthesis.

“We want to understand the molecular basis of life,” he says.

Proteins are large biological molecules consisting of one or more amino acid chains which perform a vast array of functions within living organisms, including catalyzing metabolic reactions, replicating DNA, responding to stimuli, and transporting molecules from one location to another. In a way, proteins are the molecules of life, and scientists are getting closer and closer to visualize and understand protein interactions at the most basic, atomic level.

“These results establish that we can use this same method with all kinds of biological molecules, including medically and pharmaceutically important proteins,” said Marius Schmidt, a biophysicist at the University of Wisconsin-Milwaukee who led the experiment at the Department of Energy’s SLAC National Accelerator Laboratory. “We are on the verge of opening up a whole new unexplored territory in biology, where we can study small but important reactions at ultrafast timescales.”

The thing is, even if you sequence proteins and see what amino acids they are made from, you don’t actually see how they look like and how they behave in real time. With X-Ray crystallography like it was previously used, you can see that, but only in a frame – a moment frozen in time. With this new technology, you get to see this over time, in incredibly small intervals. You basically get a time-resolved series of structures, as the proteins move through the chemical steps.

“Biology happens at inconceivably short time spans,” says Tenboer. “So the XFEL at Stanford allows us to do time-resolved studies of proteins in action down to the femtosecond time scale – that’s 10 -15 of a second. The blink of an eye probably happens on a millisecond time scale; so you’re still talking about twelve orders of magnitude faster.” 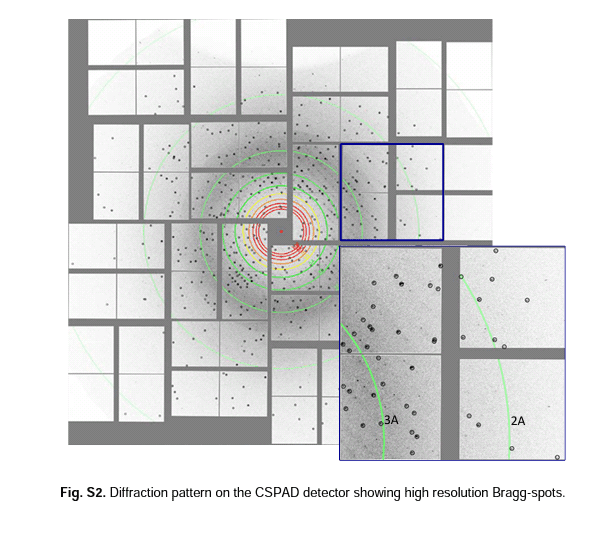 An example of what the raw image looks like – the dots create a pattern which is like a fingerprint for a protein. Image via Imgur.

The way in which this technology worked is very complex. X-Rays are shot at a protein crystal and diffract off in many directions, creating a pattern of dots the way a single shake of a paintbrush will spray splotches of paint on a wall. This creates a unique pattern, which is like a fingerprint for that specific protein. The experimental station used in the study, LCLS pulses, measured in quadrillionths of a second, work like a super-speed camera to record ultrafast changes. The experiment took place at SLAC’s Linac Coherent Light Source (LCLS).

In the future, the group wants to conduct a faster “pump and probe” experiment. With an X-ray pulse of 40 femtoseconds, they hope to get an even clearer step-by-step picture of proteic reactions.

“In the future we plan to study all sorts of enzymes and other proteins using this same technique,” Schmidt said. “This study shows that the molecular details of life’s chemistry can be followed using X-ray laser crystallography, which puts some of biology’s most sought-after goals within reach.”