Researchers from the  Lawrence Berkeley National Laboratory and the University of California, Berkeley, have devised a model that projects how climate change affects atmospheric lightning discharges. According to their findings, global warming – particularly through more water vapor gathering in the upper atmosphere – will cause lightning strikes to increase in frequency by 50% during this century. 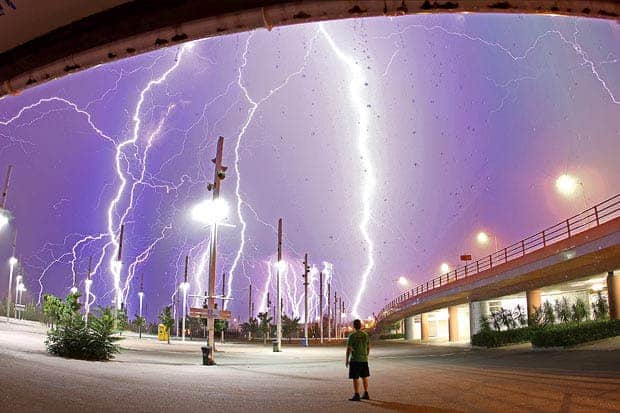 Lightning is one of the most powerful forces found in nature (if one single lightning strike was harnessed, the energy would power an entire home for a whole week), but at its core we can say that lightning is nothing but a discharge of static electricity. What we know from static electricity is that these discharges are caused by separation of charges into positive and negative ions.  Over time more of one charge builds until its natural attraction to the opposite charge causes it to migrate in an electrical discharge. In the case of lightning, the charge is built up in water. Clouds are made up of condensed water vapor, and one of water’s fantastic molecular properties is its ability to polarize charges.

Because one of the effects of global warming is an increase of water vapor in the atmosphere, it’s expected that thunders storms will intensify and become more frequent in the coming years. So far, we’ve yet to see a reliable model, but the latest predictions reported by US scientists seem to be getting there.

“With warming, thunderstorms become more explosive,” said David Romps, an assistant professor of earth and planetary science, in a statement. “This has to do with water vapor, which is the fuel for explosive deep convection in the atmosphere. Warming causes there to be more water vapor in the atmosphere, and if you have more fuel lying around, when you get ignition, it can go big time.”

The team looked at key atmospheric parameters and correlated these with lightning rates. Namely, they combined precipitation rates (total amount of water hitting the ground from rain, snow, hail or other forms ) and “convective available potential energy” (CAPE) into their model to retrieve a value for mass and energy flow through the ascending air—energy per kilogram per square meter per second.

“CAPE is a measure of how potentially explosive the atmosphere is, that is, how buoyant a parcel of air would be if you got it convecting, if you got it to punch through overlying air into the free troposphere,” Romps said. “We hypothesized that the product of precipitation and CAPE would predict lightning.”

Using actual data from 2011 gathered by weather satellites and radiosondes – ballon-borne instruments that measure CAPE –  calculated CAPE-times-precipitation for multiple locations in the continental United States. The product was then plotted against lightning rates for the same area. Results show that  CAPE-times-precipitation accounts for 77 percent of the observed variation in the tempo of cloud-to-ground lightning. Precipitation alone only accounts for 29 percent, which explains why other models that relied solely on precipitation as the feed-in parameter failed miserably at predicting lightning rates.

[AMAZING] Lightning in slow-mo – VIDEO in 7,207 frames per second

The team then used their model with data from 11 different climate model that predict precipitation and CAPE throughout the century. On average, the models predicted an 11 percent increase in CAPE in the U.S. per degree Celsius rise in global average temperature by the end of the 21st century. If atmospheric temperature is to rise by four degrees Celsius by 2100, as many models predict it to happen, then  a roughly 50 percent increase (+/- 25%) in lightning rate is expected.

Though not that many people die from lightning strikes on a yearly basis, the damage produced by wild fires induced by lightning is considerable. Lightning ignites about 10,000 wild fires each year in the US alone or 4.1 million acres.

Findings appeared in the journal Science.