Since it was first described sometime in the 1960s, the ionic thruster has remained confined to hobbyists basements, shadowed by the century old jet engine. Recent research at MIT, however, shows that in some respects the ionic thruster overwhelms the jet engine in terms of efficiency, suggesting that it definitely worth of more attention.

“Ionic wind” or Electrohydrodynamic thrust is a phenomenon that’s as fascinating, as it’s been ignored. To generate it, the typical ionic thruster only needs three components: a thin wire copper electrode (emitter), a thicker tube of aluminium encasing the emitter (collector) and an air gap in between the two. When a voltage is applied, a field gradient is produced which stripes away electrons from the air molecules. The result ionized air become thus repelled by the emitter wire and attracted by the collector walls. The ionized air moves towards the collector it collides with neutral air molecules, pushing them away in the process thus producing wind or thrust. 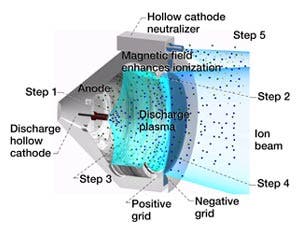 Science fairs have been kind to the ionic thruster, where it often can be seen making its appearance,  and youtube is riddled with how-to videos on how to build one and impress your friends. However, there have been few studies willing to seriously dwell into its potential. The main reason for this is that its believed to be highly inefficient, however a recent research conducted at MIT tells otherwise and, moreover, points in the absolute opposite direction.

After producing their ionic thruster, the MIT researchers ran experiments and found that ionic wind produces 110 newtons of thrust per kilowatt, compared with a jet engine’s 2 newtons per kilowatt or 55 times more efficient.

Lead researchers Steven Barrett and Kento Masuyama admit, however, that the ionic thruster boasts this extreme efficiency at low-thrust. Still it would still make it highly suited for economic, low-velocity and lightweight airplanes.

“It’s kind of surprising, but if you have a high-velocity jet, you leave in your wake a load of wasted kinetic energy,” Barrett explains. “So you want as low-velocity a jet as you can, while still producing enough thrust. An ionic wind is a good way to produce a low-velocity jet over a large area.”

To measure the ion thruster’s efficiency, the MIT scientists hung their contraption under a suspended digital scale and applied tens of thousands of volt. The distance between the electrodes was altered incrementally, while the thrust was recorded as the device lifted off the ground.

Another neat feature ionic thruster possess and which makes them net superior to jet propulsion engines is the fact that they’re infrared invisible, since they don’t give off heat, and are completely silent. Naturally, the military applications would be enormous, especially those surrounding unmanned drones. “You could imagine all sorts of military or security benefits to having a silent propulsion system with no infrared signature,” says Barrett.

The ionic thruster might make its comeback, but it’s a picky fellow

So why isn’t this the next best thing? Why aren’t all airplanes running on ionic thrusters? The biggest obstacle in practically implementing ionic thrusters is its low thrust density or the amount of thrust produced per given area. Ionic thrusters depend on the wind between the two electrodes (emitter and collector), such that the larger the spacing between the two, the stronger the thrust. Lifting an airplane, albeit lightweight, means that it would need to be built with ionic thruster encompassing the whole length of the plane.

Another serious drawback is the amount of voltage required to kick-start the thruster. A small craft, filled with modern onboard instruments and power supply, would needs hundreds or thousands of kilovolts to lift the airplane off the ground initially.

“The voltages could get enormous,” Barrett says. “But I think that’s a challenge that’s probably solvable.” For example, he says power might be supplied by lightweight solar panels or fuel cells. Barrett says ionic thrusters might also prove useful in quieter cooling systems for laptops.

“Efficiency is probably the number one thing overall that drives aircraft design,” Barrett says. “[Ionic thrusters] are viable insofar as they are efficient. There are still unanswered questions, but because they seem so efficient, it’s definitely worth investigating further.”

The MIT team published their findings in the journal Proceedings of the Royal Society.