A team at University of California-San Diego who has been experimenting with invisibility cloaks for over a decade reports a breakthrough design worthy of real life application. That’s not to say they’ve built a cloak that can turn objects oblivious to eye sight, i.e. Harry Potter, but it’s definitely the best thing we’ve heard about so far: it’s thin enough to coat on a vehicle or airplane, all while blocking both light and radio waves. It’s so good that the Pentagon is seriously considering implementing it, according to an exclusive report by Army Times. 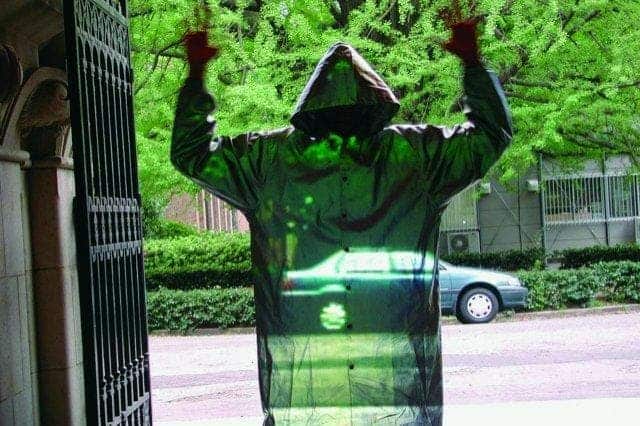 This is just an artsy photo, not a real invisibility cloak. Photo: E&T

The design is based on a thin dielectric metasurface that scatters light and radio waves as if they’d been reflected by a flat surface. Like previously reported cloaks, the crucial component is the material geometry itself, in this instance known as a metamaterial or a material with properties that can’t be encountered in nature. In a homogeneous material, electromagnetic waves travel along a path of least resistance or the one that takes the least amount of time to complete. This entails a straight line, but in non-homogeneous materials this path is a curve because the electromagnetic waves travel at different speeds through different mediums. So by varying parameters like geometry, electric permittivity and magnetic permeability in just the right way, you can make light and radio waves scatter in a predictable way. Because radar sees by detecting radio waves bounced off an object, like an airplane, and our eyes see by detecting the light bounced off objects, controlling how these electromagnetic waves scatter light can rend an object virtually invisible.

What’s exciting about the UCSD research is how they’ve managed to reduce the metamaterial thickness while supporting cloaking. Previous attempts, mostly based on teflon, required a coating that’s at least 10 times thicker than the desired wavelength to be cloaked. This means that if an aircraft had to become invisible to a groundradar that operates at a 3cm wavelength, then the coating would need to be 30cm thick. That’s quite impractical. But the team led by Boubacar Kante, a professor at the University of California-San Diego, found a way to operate their cloak using ceramics – a widespread, cheap material – that allows cloaking with a coating 1/10 of the desired wavelength. So the 3cm wavelength radar can be muted using only a 3mm coating. That’s far more practical. For light waves, where the visible spectrum falls between 400 to 700 nanometers, the coating can be minuscully thin.

. Schematic of the entire metasurface, discretized with 25 cylinders, and coordinate system.
(Inset) unit cell of the metasurface. The bottom black line is the ground plane, the light blue substrate
is Teflon, and the dark blue cylinder is ceramic. The incident wave is polarized along the y axis. Credit: Progress In Electromagnetics Research

The research is so exciting that the Homeland Defense & Security Information Analysis Center, an agency tasked with turning academic research into practical applications for the Pentagon, has become particularly interested. It’s “basically what the military’s looking for”, says Kayla Matola, research analyst for HDIAC.

There are however some serious drawbacks. First, this is not a complete invisibility cloak and we might never see one. Not the kind you see in movies, at least. You can tweak the metamaterial as much as you want, but you will always have certain angles which can’t scatter the light to make it impervious. Kante is pretty close though. The device his team built cloaks objects hit by light at a 45 degree angle, and works effectively only within a 6-degree range of angles.  Also, you can’t use the cloak to render objects invisible to both eyes and radar. You have to pick one since the metamaterial is custom made to accommodate a strict wavelength.

In any event, this is the most effective invisibility cloak made so far. According to Kante, based on how much the military decides to get involved, their work could see real world applications in just five years.