The human retina can only detect incident light that falls in waves 400 to 720 nanometers long, so we can’t see microwave or ultraviolet wavelengths. This also applies to infrared lights which has wavelengths longer than visible and shorter than microwaves, thus being invisible to the human eye. Apparently, this isn’t entirely true. In some special conditions, the human eye can indeed detect infrared light according to scientists at Washington University School of Medicine in St. Louis.

Not that invisible after all 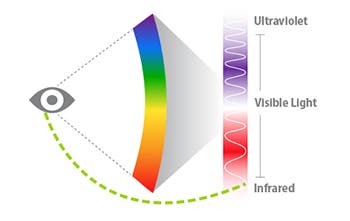 The human eye can detect only those light frequencies that fall in the so-called visible spectrum. Anything outside of it, like the ultraviolet or infrared range, can’t be detected, hence seen. In some special conditions, however, scientists have demonstrated that its possible to notice infrared light. Image: Sara Dickherber

It all started when researchers started seeing brief flashes of green light from time to time while working with an infrared laser. These light waves are thought to be invisible to the naked eye, so everybody was very intrigued by this episode. If it didn’t happen to more than one person in the lab, most likely the whole event would’ve been put on fatigue or a sudden lapse of insanity.

Being scientists, the US researchers sought to investigate the matter. They soon came across scientific literature that reported how some people were able to detect infrared light when exposed to infrared lasers. They soon geared some experiments where various lasers where used, operating under different parameters. They found the shorter the pulse, the likelier was for a person to notice the infrared light.

“We experimented with laser pulses of different durations that delivered the same total number of photons, and we found that the shorter the pulse, the more likely it was a person could see it,” Vinberg explained. “Although the length of time between pulses was so short that it couldn’t be noticed by the naked eye, the existence of those pulses was very important in allowing people to see this invisible light.”

Past the visual spectrum

A thermal image visually represents the difference in temperature across various surfaces on a body. Image: Wikimedia

The primary source of infrared radiation is heat or thermal radiation. This is the radiation produced by the motion of atoms and molecules in an object. The higher the temperature, the more the atoms and molecules move and the more infrared radiation they produce. Humans, at normal body temperature, radiate most strongly in the infrared, at a wavelength of about 10 microns (a micron is one millionth of a meter). Using a thermographic camera you can see infrared radiation, but that’s a bit of an overstatement. Simply put, information about the radiation is being represented visually for humans, who can’t see in infrared. Some animals can “see” in the infrared. For example, snakes in the pit viper family (e.g. rattlesnakes) have sensory “pits,” which are used to detect infrared light. This allows the snake to find warm-blooded animals (even in dark burrows), by detecting the infrared heat that they radiate. S

At the back of the eyeball is a layer of light-sensitive cells, called the retina. Photons (packets of energy) in lightwaves stimulate the cells of the retina and send messages to the brain, enabling us to see. The retina’s rod-shaped cells work best in dim light, and its cone-shaped cells, which detect colour, in bright light. The photons aren’t absorbed directly, though. In an intermediate step, photons absorbed by the retina stimulate the creation  a molecule called a photopigment, which begins the process of converting light into vision. Typically, each photopigment corresponds to one photon.

If we pack a lot of photons in a short pulse, like with an infrared laser, then its possible for one two photons to be absorbed at one time by a single photopigment, and the combined energy of the two light particles is enough to activate the pigment and allow the eye to see what normally is invisible.

“The visible spectrum includes waves of light that are 400-720 nanometers long,” explained Kefalov, an associate professor of ophthalmology and visual sciences. “But if a pigment molecule in the retina is hit in rapid succession by a pair of photons that are 1,000 nanometers long, those light particles will deliver the same amount of energy as a single hit from a 500-nanometer photon, which is well within the visible spectrum. That’s how we are able to see it.”

There’s some practical applications to the findings (PNAS), too. Doctors might want to shine infrared pulses into a patient’s retina to see if it responds correctly to the stimulus.