If you ever shone a cheap laser onto a distant building then you surely noticed the ‘dot’ gets bigger the farther away your fire it. That’s because laser light will gradually expand its size in a cone-shape due to the wave nature of light while losing energy. A high-power laser is totally different, though. In the right conditions, it can act like its own lens to self-focus and create an ever tighter, intenser beam. Strangely enough, a group of researchers discovered that these high-power laser beams also generate swirls of optical energy that engulf the beam sort of like smoke rings. Like the laser beam, the swirls or vortices travel at the speed of light.

Smoke under our noses

The laser smoke rings were dubbed  “spatiotemporal optical vortices,” or STOVs, by the University of Maryland physicists. Given the right conditions, any powerful laser will create them, which makes it kind of odd we’re only now discovering them.

“Lasers have been researched for decades, but it turns out that STOVs were under our noses the whole time,” said Howard Milchberg, professor of physics and electrical and computer engineering at UMD and senior author of the paper published in Physical Review X.

“This is a robust, spontaneous feature that’s always there. This phenomenon underlies so much that’s been done in our field for the past 30-some years.”

There’s another type of optical vortices made by lasers called “orbital angular momentum” (OAM) vortices. Known for decades, OAM vortices are light energy that circles the beam around the direction of propagation much like water spins around a drain’s center of gravity. 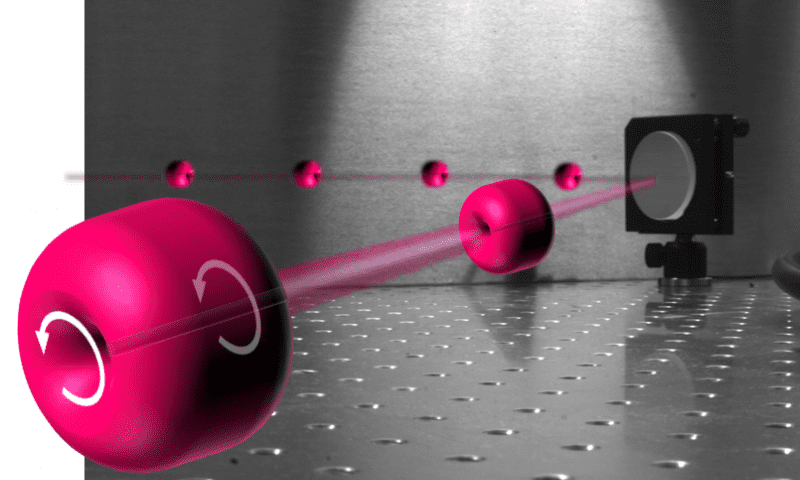 Shown as cute pink rings are OAM vortices — 3-D laser light structures that rotate around a central beam, like water circles a drain. This property is exploited by high-resolution microscopy. Credit: Howard Milchberg

Unlike OAM vortices which are stationary, the optical smoke rings are time dynamic, meaning they move along the beam.

OAM vortices have proven very useful in certain optical applications like telecommunications or microscopes due to their ability to create small structures in the light itself. This way, you can control what gets illuminated and what doesn’t.Though there’s no immediate practical application to STOVs, the University of Maryland scientists are fascinated by their ability to manipulate particles moving near the speed of light. There’s still much to be done before we can unravel all of these optical smoke rings’ secrets.

“All the evidence we’ve seen suggests that STOVs are universal,” said Nihal Jhajj, a physics graduate student who conducted the research at the UMD Institute for Research in Electronics and Applied Physics (IREAP). “Now that we know what to look for, we think that looking at a high-intensity laser pulse propagating through a medium and not seeing STOVs would be a lot like looking at a river and not seeing eddies and currents.”