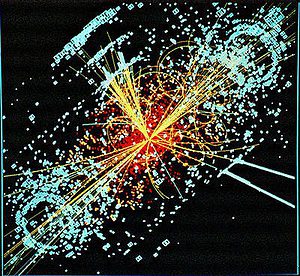 A computer generated image of a Higgs interaction

CERN researchers have announced this Friday that they may had caught a glimpse of the fabled Higgs Boson particle, also known as the “God Particle”. Scientists have the news during the 2011 Europhysics Conference on High-Energy Physics (HEP 2011), which opened Thursday in Grenoble, France.

This came after two collision detector teams (Atlas and CMS), independently confirmed  unusual bumps in their data that could be the first hints of the particle, after smashing subatomic particles together in the 18-mile round tunnel at nearly the speed of light.

The “God particle” is thought to give mass to the basic building blocks of nature, a small theoretical particle, indispensable to a set of rules in physics that we call the Standard Model. If its existence is proven, our entire understanding of physics will need to be re-written. Physicist Peter Higgs first hypothesized this particle in 1964, while Nobel prize winner Leon Lederman nicknamed it the “God particle”.

Previous research has lead scientists to believe that the Higgs boson has a mass between 114-185GeV (gigaelectronvolts). The Atlas team reported a bump between 120 and 140GeV, while CMS team found two bumps in the same region, which could very well correspond to the elusive particle.

CERN scientists are getting their hopes too high yet, though, as more data and correlation between the two stations is need for a pertinent scientific comment to be made. According to a press release, officials working on the LHC have scheduled a press release for Monday, July 25, where representatives from all CERN teams involved on the project are expected to present data.

“Discovery or exclusion of the Higgs particle, as predicted by the Standard Model, is getting ever closer,” CERN Director for Research and Scientific Computing, Sergio Bertolucci, said in a statement. “Both occurrences will be great news for physics, the former allowing us to start the detailed study of the Higgs particle, the latter being the first proof of the incompleteness of the Standard Model, requiring new phenomena to be happening within the reach of the LHC.”

We’ll keep you posted on the events at the conference, as more details emerge.