A team of UK researchers led by none other but  Nobel Laureate Andre Geim – one of persons involved in graphene’s discovery in 2004 – has shown that the wondrous two dimensional material graphene can used as a proton exchange membrane in fuel cells. The find took everybody by surprise since no one expected graphene could allow protons to pass through its tight, one-atom thick hexagon structure. In addition, graphene membranes could be used to sieve hydrogen gas out of the atmosphere making it possible for mobile fuel cells to run on nothing but air! 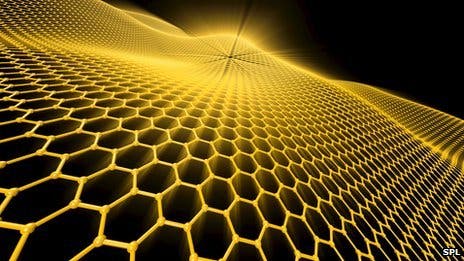 In simple terms, graphene, is a thin layer of pure carbon; it is a single, tightly packed layer of carbon atoms that are bonded together in a hexagonal honeycomb lattice. Image: Wikimedia

Among graphene’s many useful properties (strongest material, extraordinary electrical conductivity, self-repair ability, flexibity etc.) is its impermeability. It would take billions of years for hydrogen, the smallest molecule, to pierce a graphene monolayer. This makes it a great containing material, especially for small gas molecules known to quickly escape into the atmosphere. Hydrogen cars, for instance, need to store their fuel inside a container that doesn’t diffuse hydrogen, something that has proven to be a challenge. Graphene might help a lot in this respect, yet it’s this extremely tight permeability that made people believe the material is useless in fuel cells.

Fuel cells are electrochemical energy converters that combine a fuel, usually hydrogen, with oxygen to directly generate electricity and a H2O by-product, with no intermediate steps in between. Fuel cells are much more efficient than a combustion engine, which uses a two-step conversion process, and if hydrogen is used as a fuel, there are zero emissions. They’re mostly employed today in the automotive industry, but they’re great for using stored energy from renewable sources as well.

There are two indispensable components to a fuel cell: a catalyst and a proton exchange membrane. The idea is to use a catalyst to break the hydrogen atoms into electrons and hydrogen protons. The electrons, blocked by the membrane, travel through a circuit and generate an electrical flux, while the protons, small enough to pass through the membrane, join with the oxygen molecules on the cathode side and form water. These membranes aren’t fail safe though and most often then not, whole hydrogen atoms or methanol (or whatever fuel) can pass through and make the process less efficient.

The University of Manchester  team made a long shot and tested to see if graphene could be used as a proton membrane. Amazingly, they found that  monolayers of graphene and boron nitride are highly permeable to thermal protons under ambient conditions, as reported in Nature. This means that thinner membranes can now be made, ones that are a whole lot more reliable since graphene is a full proof gas separator.

Harvesting hydrogen from the air

Researchers at Manchester also demonstrated an exciting prospect in using graphene one-atom-thick membranes to directly extract hydrogen from a humid atmosphere. The collected hydrogen was in very small amounts, but these are only the first steps – a proof of concept. Imagine a car that uses hydrogen collected from the air, in addition to its stored fuel in tanks  – it would be incredible!

“When you know how it should work, it is a very simple setup,” said Marcelo Lozada-Hidalgo, a PhD student and corresponding author of this paper, in a press release. “You put a hydrogen-containing gas on one side, apply a small electric current, and collect pure hydrogen on the other side. This hydrogen can then be burned in a fuel cell.”

Lozada-Hidalgo added: “We worked with small membranes, and the achieved flow of hydrogen is of course tiny so far. But this is the initial stage of discovery, and the paper is to make experts aware of the existing prospects. To build up and test hydrogen harvesters will require much further effort.”

Here are a few quick facts about graphene:

In the last couple of years, considerable effort has been spared in order to mass produce graphene. This year, the first process that produces monolayer graphene in bulk was reported. On a more rudimentary level, you can make your own graphene at home using a kitchen blender.  Graphene can be used in a slew of applications, thanks to its extended properties, and once the industry gets the hang of making it in large quantities we might witness a whole new technological revolution. I for one welcome our graphene overlord!