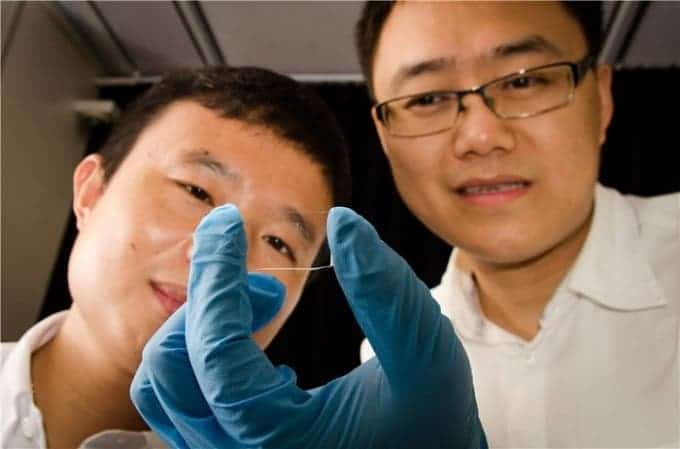 It seems like every week there’s a new study that hails a new wonder property or fantastic application for graphene. Is it truly the  material of the future that will catapult technology to the next level? Seems like it. For instance, scientists at Nanyang Technological University (NTU) in Singapore used graphene as the basis for a novel image sensor. The resulting device is 1,000 more sensitive to light than current commercially available sensors, uses 10 times less energy and if mass produced could be five times cheaper. Since the graphene-based sensor can detect a wider spectrum of light, if introduced, it may significantly boost the quality in imaging cameras of all types, traffic speed cameras, satellite imaging and more.

Graphene is all made out of pure carbon, arranged in a honey-comb structure only one atom thick. It may sound like fragile, but it’s not. It’s actually incredibly strong – the strongest material in the world –  so strong that a single sheet as thin as clingfilm could hold the weight of an elephant. It’s also very flexible and has a high electrical conductivity, among many other appealing properties. 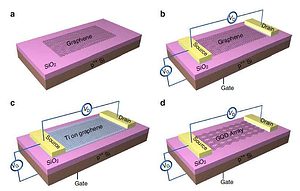 Fabrication process of the device. (a) A monolayer graphene was mechanically exfoliated onto a 285nm SiO2/Si substrate. (b) The graphene photodetector was processed into a FET structure. Two electrodes (that is, the source and the drain terminals) of Ti/Au (20 nm/80 nm) were fabricated on the graphene by photolithography and lift-off processes. The gate terminal was fabricated on the bottom of the Si substrate. (c) A thin nm-scale Ti sacrificial layer was deposited onto the graphene by electron-beam evaporation. (d) The Ti sacrificial layer was removed via wet etching, and then GQD array structure with various quantum dot (QD) sizes can be formed on the Si substrate depending on the thickness of the Ti layer. (Credit: Y. Z. Zhang et al./Nature Communications)

“We have shown that it is now possible to create cheap, sensitive, and flexible photo sensors from graphene alone,” said  Assistant Professor Wang Qijie, from NTU’s School of Electrical & Electronic Engineering. “We expect our innovation will have great impact not only on the consumer imaging industry, but also in satellite imaging and communication industries, as well as the mid-infrared applications,” said Wang, who also holds a joint appointment in NTU’s School of Physical and Mathematical Sciences.

“While designing this sensor, we have kept current manufacturing practices in mind. This means the industry can in principle continue producing camera sensors using the CMOS (complementary metal-oxide-semiconductor) process, which is the prevailing technology used by the majority of factories in the electronics industry. Therefore manufacturers can easily replace the current base material of photo sensors with our new nano-structured graphene material.”

Wang Qijie, the inventor of the new sensor, devised the highly sensitive sensor by first fabricating graphene sheets into novel structures that “trap” light-generated electron particles, resulting in a much stronger electric signal. Trapping electrons is the key to achieving high photo-response in graphene, which makes it far more effective than the normal CMOS or CCD (charge-coupled device) image sensors, said Wang. The stronger the electric signals generated, the clearer and sharper the photos. So, once the first graphene-based sensor equipped cameras hit the market, blurry pictures might become a distance memory. Also, just think about what kind of night vision goggles you can make using graphene. Nevermind, you can  improve just about anything with graphene.

Currently, the researchers are in talks with major manufacturers to introduce the technology within a few years in their product development cycle.

Findings were reported in the journal Nature Communications.