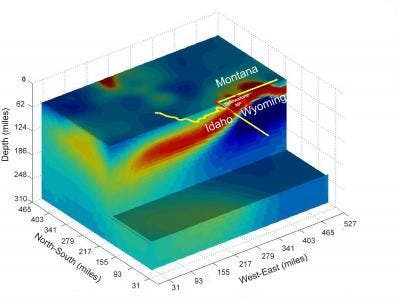 Yellowstone is without a doubt one of the most fascinating places on the face of the planet. But it doesn’t only attract families or people who want to relax, but it attracts scientists as well, and among them, geologists and geophysicists hold a top spot. University of Utah researchers made the first large-scale picture of the electrical conductivity of the enormous underground plume of hot and partially molten rock that feeds the Yellowstone volcano. The image suggests that it is much bigger than previously thought before, when it was also investigated with geophysical methods, but in the form of seismic waves.

“It’s like comparing ultrasound and MRI in the human body; they are different imaging technologies,” says geophysics Professor Michael Zhdanov, principal author of the new study and an expert on measuring electric and magnetic fields, with the purpose of investigating underground objectives.

In a previous 2009 study, researchers (Smith) used seismic waves from earthquakes to make an accurate image of the plume that feeds the volcano. In addition to other factors, seismic waves travel faster in cold rocks and slower in hotter rocks, so seismic velocity information can be used to make a pretty accurate 3D picture, much like X-rays are combined to make a medical CT scan.

But in this type of cases, electric measurements can be much more direct and offer much more answers, but they measure slightly different things. Seismic analysis shows which rocks are hotter and slow down waves, while electric measurements show the conductivity of the rocks, and is especially sensible to briny fluids that conduct electricity.

“It [the plume] is very conductive compared with the rock around it,” Zhdanov says. “It’s close to seawater in conductivity.”

The new study doesn’t say anything about the chances of a catastrophic eruption at Yellowstone, but it does seem to suggest than when it is going to come, it will be bigger than previously expected.