Chinese researchers made the first quantum secure video using subatomic particles called photons. The call was made between the Chinese Academy of Sciences and the Austrian Academy of Sciences, demonstrating the practicality of quantum key distribution — a feat that will likely radically change the way sensitive data is shared from now on. 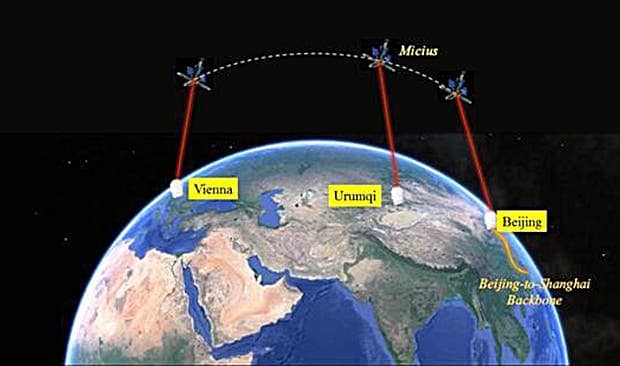 Micius satellite as it passes over China and Austria. Credit: Chinese Academy of Sciences.

This was the climax of more than ten years of research on behalf of Chinese scientists. Earlier last year, the nation launched ‘Micius’, the first quantum satellite, into Earth’s orbit. This summer, the satellite beamed entangled particles of photons to three ground stations across China, each separated by more than 1,200km. This marked a 10-fold increase in the distance under which entanglement was maintained compared to the previous record.

“The exchange of quantum encrypted information over inter-continental distances confirms the potential of quantum communication technologies as opened up by fundamental research”, says Anton Zeilinger, a quantum physicist at the University of Vienna. He is convinced: “This is a very important step towards a world-wide and secure quantum internet.”

The most secure means of encryption — for the time being

Quantum entanglement — or what Einstein used to call “spooky action at a distance” — is a physical phenomenon that occurs when pairs or groups of particles are generated or interact in ways such that the quantum state of each particle cannot be described independently of the others. If one of two entangled particles changes its quantum state, it influences the other and directs an instant change, even if the two particles are spaced apart at the other ends of the universe. At least, that’s what our current understanding is. Giving one particle an ”up” spin, for instance, always means its entangled partner has a ”down” spin. This change is instantaneous, according to physicists.

In a demonstration that took place on Friday, the team from the Chinese Academy of Sciences led by physicist Jian-Wei Pan generated a secure key from Micius. The satellite is able to fire single photons suspended in superposition that can be used to generate a random sequence of bits. It’s this string of bits that’s the secret code that two parties use to either encrypt or decrypt a message through a method called the one-time pad.

During the team, the Chinese researchers connected a ground station in Xinglong and the Micius satellite as it passed overhead, orbiting about 500 kilometers above Earth. From the Chinese site, the secure key was sent through fiber optics to Beijing, where the Chinese Academy of Sciences is located. When Micius passed above Vienna, the satellite sent the key to collaborators at the Austria Academy of Sciences. With this key at hand, the two groups initiated a video conference through a standard VPN protocol. The call lasted for about half an hour and the quality was reportedly ‘excellent’.

For many years, scientists have investigated the theoretical aspects of quantum encryption. Now, after investing considerable resources (launching a satellite and building three dedicated facilities), China proves it can be done.

What makes this type of communication extremely secure is that any evesdropping will change the quantum state and thus scramble the message.

“If somebody attempts to intercept the photons exchanged between the satellite and the ground station and to measure their polarization, the quantum state of the photons will be changed by this measurement attempt, immediately exposing the hackers,” said Johannes Handsteiner from the Austrian Academy of Sciences in a statement.

For now, bandwidth is fairly limited, so we’re not going to see a lot of people switch to quantum encryption just yet. The key was transmitted at a rate of 200 kilobytes per orbit between Micius and the Xinglong station, and 50 kB per orbit between the satellite and the Vienna ground station, IEEE Spectrum reported.

Next, China plans on further demonstrating quantum encryption with partners from Italy, Germany, Russia, and Singapore.