A $1.6 billion cosmic ray experiment on the International Space Station has come across evidence of antimatter in space, a remarkable finding that was recently presented during a seminar at CERN and which might help probe the mysteries of dark matter – one of the major components that make up the Universe. 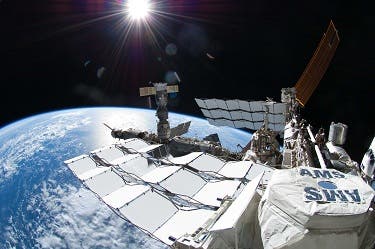 The AMS-02 experiment is a state-of-the-art particle physics detector that is constructed, tested and operated by an international team composed of 56 institutes from 16 countries and organized under United States Department of Energy (DOE) sponsorship. Seen here as the round instrument labeled as “AMS”. (c) NASA

The find was made using the Alpha Magnetic Spectrometer (AMS), an instrument mounted on the International Space Station which has been likened by many as an LHC in space. AMS job is that of  surveying the sky for high-energy particles, or cosmic rays and has so far recorded 25 billion events. It’s main mission is that of identifying and describing dark matter, a mysterious component which we can not see, unlike regular matter, but which we know for sure exists because of the gravitational effects it holds on regular matter.

It’s believed that whenever dark matter collides, it forms antimatter as a result of what’s called annihilation. Antimatter is, naturally, the reverse of matter and every particle in the Universe has its corresponding antiparticle. For instance, the electron’s antiparticle is the antielectron, known as a positron. The electron and the antielectron have exactly the same masses, but they have exactly opposite electrical charges. Scientists believe that in the wake of the Big Bang an equal amount of matter and antimatter was ejected through out the Universe, however why they didn’t cancel each other out or why there seems to be more matter than anti-matter is a subject that’s giving physicists really big headaches.

Normal matter contributes just 4.9% of the mass/energy density of the Universe, dark matter is believed to range somewhere in the 26.8% margin, while dark energy – the force thought to be accelerating the expansion of the Universe – sits atop a comfortable majority of 68.3%.

Anyway, the AMS instrument shines by counting the numbers of electrons and their anti-matter counterparts from space – positrons – falling on an array of detectors. At the CERN seminar, completed just mere hours ago, AMS spokesperson and lead scientist Professor Samuel Ting unveiled some spectacular results. According to Ting, a slight excess of positrons in the positron-electron count was experienced, something expected in the aftermath of dark matter annihilation.

Evidence of dark matter finally found? Don’t get too excited…

This positron count excess could have come from pulsars, the spinning remnants of dead stars that throw off wild winds of radiation. Analysis has shown however that the positrons fall on the AMS from all directions, rather than a specific signal direction like one given off by a pulsar, suggesting what the researchers have come across are actually dark matter decay remnants. What this also suggests is that we may be on the brink of a monumental discovery in physics. According to the CERN press release:

“The AMS results are based on some 25 billion recorded events, including 400,000 positrons with energies between 0.5 GeV and 350 GeV, recorded over a year and a half. This represents the largest collection of antimatter particles recorded in space. The positron fraction increases from 10 GeV to 250 GeV, with the data showing the slope of the increase reducing by an order of magnitude over the range 20-250 GeV. The data also show no significant variation over time, or any preferred incoming direction. These results are consistent with the positrons originating from the annihilation of dark matter particles in space, but not yet sufficiently conclusive to rule out other explanations.”

CERN scientists, as they should be, are cautious and don’t mean to make bold statements as of yet.

“As the most precise measurement of the cosmic ray positron flux to date, these results show clearly the power and capabilities of the AMS detector,” said AMS spokesperson, Samuel Ting. “Over the coming months, AMS will be able to tell us conclusively whether these positrons are a signal for dark matter, or whether they have some other origin.”

If the more positrons than expected at higher energies can be attributed to dark matter remains to be seen, as we anxiously await new findings from AMS and CERN in the coming months. What’s certain is that only two years in its ten year mission, the AMS has already shown us a great deal, so expect much more from its behalf.

The findings are slated for publishing in the journal Physical Review Letters.