Earth can be likened to one big, planetary magnet. Likewise, Earth’s magnetic field is similar to that of a bar magnet tilted 11 degrees from the spin axis of the Earth. The magnetic field serves to deflect most of the solar wind, whose charged particles would otherwise strip away the ozone layer that protects the Earth from harmful ultraviolet radiation. But were you to use a compass at varied points throughout history, you would be in for a huge surprise, like seeing the compass’ needle pointing in the opposite direction than expected. When South becomes North and North becomes South, all sorts of unexpected and dangerous things can happen. This has happened many times throughout Earths’ geological history, and a new study suggests that we’re not only overdue for a pole reversal but that such events happen much faster and suddenly than previously thought.

The Earth’s magnetic field looks like that which would be produced by placing a bar magnet at the center of the Earth, with the North Magnetic Pole corresponding to the South Geographic Pole and vice versa. The Earth’s magnetic dipole originates in swirling currents of molten iron deep in the Earth’s core, and extends more than 10 Earth radii, or 63.7 million meters out into space on the side facing the Sun, and all the way to the Moon’s orbit, at 384.4 million meters on the opposite side. Magnetic field lines loop out of the South Geographic Pole and into the North Geographic Pole. 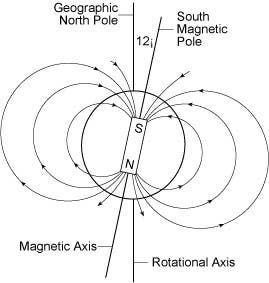 There are currents that guide the molten iron inside the planet’s core and, consequently, the magnetic poles can move or shift over time, losing or gaining strength. Scientists not only know that the magnetic field’s intensity changes over time, but they also know when dramatic shifts in intensity or pole reversal occurred. That’s because such events are recorded in the “frozen” ferromagnetic (or, more accurately, ferrimagnetic) minerals of consolidated sedimentary deposits or cooled volcanic flows on land.

It’s from these records that geologists learned that the last magnetic reversal took place 786,000 years ago. It happened very quickly, too, occurring in less than 100 years.

However, there are also dramatic reversals in field polarity, which occur more frequently. The challenge in pinpointing such events lies in the fact that igneous rocks do not capture the fine movements that lead up to a reversal. Andrew Roberts from the Australian National University (ANU) and colleagues found a workaround by studying stalagmite growing on the floor of a cave in southwestern China. A stalagmite is a type of rock formation that rises from the floor of a cave due to the accumulation of material deposited on the floor from ceiling drippings — given its slow growth, such formations offer the perfect opportunity to study slight variations in Earth’s magnetic field along the years.

The stalagmite, which is one meter in length and eight centimeters in diameter, has a candle-like shape and ranges in color from yellow to dark brown. Researchers cut it into 190 pieces, analyzing each with a high-res cryogenic magnetometer to make a snapshot of Earth’s magnetic field direction and strength as they stood from 107,000 to 91,000 years ago.

Writing in the Proceedings of the National Academy of Sciences, the authors of the new study found a brief pole reversal that occurred about 98,000 years ago and lasted for a century, maybe two. That’s a lot faster than scientists had guessed. Previously, scientists used to think it would take several thousands of years for the poles to change.

“The record provides important insights into ancient magnetic field behaviour, which has turned out to vary much more rapidly than previously thought,” Professor Roberts said.

This is bad news for a technologically-dependent species such as ourselves. Every pole reversal is joined by a weakening of the field and because the field’s intensity is bound to decrease considerably, much more radiation from space will be able to reach the planet’s surface than it does today. However, life on Earth shouldn’t be affected too much by this directly — humanity has lived through several pole reversals and we’re still here. Likewise, there were no mass extinction events coinciding with a pole reversal that scientists could find.

However, much has changed since the last time the planet’s magnetic field weakened by this much. For one, much of our existence is predicated on not only electrical power but also satellite-based communications, which nowadays are synced so much with the power grid that the two are basically inseparable. If our fleet of satellites was to suddenly come offline, much the world could suffer blackouts which could last for years. In the ensuing chaos, it’s anyone’s guess what would happen next.

Even today with Earth’s magnetic field at full strength, solar weather can pose a threat to sensitive electronics.

“Hopefully such an event is a long way in the future and we can develop future technologies to avoid huge damage, where possible, from such events,” Professor Roberts said in a statement.