In a breakthrough moment, researchers at MIT successfully cooled sodium potassium gas molecules (NaK) near absolute zero. At this temperature, matter behaves significantly different and starts exhibiting quantum effects. This is the coldest any molecule has been measured so far. 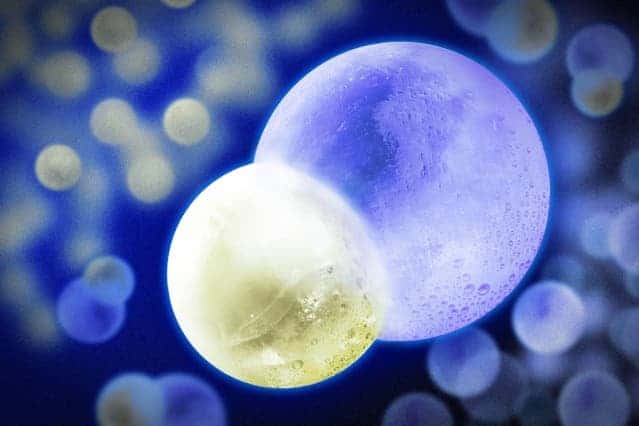 In this artist’s illustration, the NaK molecule is represented with frozen spheres of ice merged together: the smaller sphere on the left represents a sodium atom, and the larger sphere on the right is a potassium atom.
Illustration: Jose-Luis Olivares/MIT

Normally, at ambient temperature, molecules zip by at colossal speeds, colliding and reacting with each other. There probably are millions of such collisions happening every moment in the air you breath. When matter gets really cold though, its movements near to a halt as it’s chilled closer and closer to absolute zero (0 Kelvin or -273.15 degrees Celsius). Other strange things start happening as well. For instance, when Helium is cooled down to near zero the substance (a gas at room temperature) turns into a liquid with no viscosity – a superfluid. But it’s a lot easier to cool single atoms, like He, than molecules, which comprise two or more atoms linked by electromagnetic forces.

Molecules are a lot more complicated since they exhibit more complex degrees of freedom:  translation, vibration, and rotation. So, cooling the molecules directly is challenging, if not impossible with current means. To cool the sodium potassium gas, the researchers had to employ multiple steps. First, the MIT team used lasers and evaporative cooling to cool clouds of individual sodium and potassium atoms to near absolute zero. Typically, sodium and potassium don’t form compounds because they repel each other. However, the researchers “glued” them together by prompting the atoms to bond with an electromagnetic field. This mechanism is known as “Feshbach resonance.”

The resulting bond, however, is very weak – a “fluffy molecule”, as the researchers call it. To bring the atoms closer together, and strengthen the bond as a consequence, the researchers employed a novel technique used previously  in 2008 by groups from the University of Colorado, for potassium rubidium (KRb) molecules, and the University of Innsbruck, for non-polar cesium­ (Ce2­) molecules. Yet again, the weak molecules were exposed to a pair of laser pulses, the large frequency difference of which exactly matched the energy difference between the molecule’s initial, highly vibrating state, and its lowest possible vibrational state. The sodium potassium molecule absorbed the lower energy from one laser and emitted energy to the higher-frequency laser. So, what the MIT researchers got at the end were very low energy state, ultra-cold molecules sitting as low as 500 nanoKelvins or just billionths of a degree above absolute zero.

The resulting ultra-cool molecules were quite stable, with a relatively long lifetime, lasting about 2.5 seconds. The molecules also exhibited very strong dipole moments — strong imbalances in electric charge within molecules that mediate magnet-like forces between molecules over large distances. Concerning their speed, at such a cool temperature, the molecules average speeds of centimeters per second and are almost at their absolute lowest vibrational and rotational states.

“In the case where molecules are chemically reactive, one simply doesn’t have time to study them in bulk samples: They decay away before they can be cooled further to observe interesting states,” says Martin Zwierlein, professor of physics at MIT and a principal investigator in MIT’s Research Laboratory of Electronics. “In our case, we hope our lifetime is long enough to see these novel states of matter.”

The next step is cooling the molecule even further to maybe catch a glimpse of the quantum mechanical effects that are predicted should happen.  Findings appeared in the journal Physical Review Letters.

“We are very close to the temperature at which quantum mechanics plays a big role in the motion of molecules,” Zwierlein says. “So these molecules would no longer run around like billiard balls, but move as quantum mechanical matter waves. And with ultracold molecules, you can get a huge variety of different states of matter, like superfluid crystals, which are crystalline, yet feel no friction, which is totally bizarre. This has not been observed so far, but predicted. We might not be far from seeing these effects, so we’re all excited.”