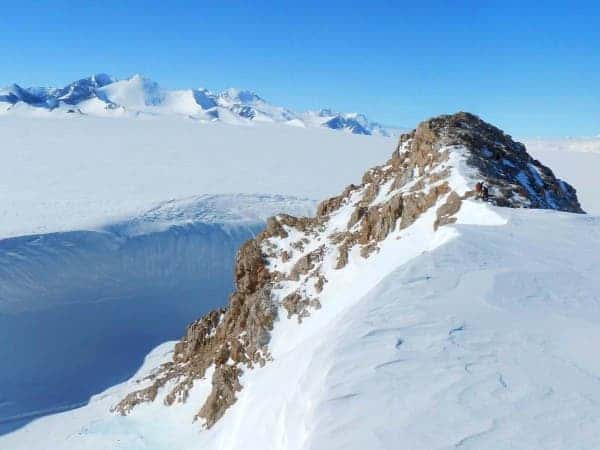 Chile is one of the most seismically active countries in the world. In 2010, it was struck by a powerful 8.8 earthquake which produced temblors throughout the entire country, as well as in Peru and Argentina. But a new study concluded that its effects were felt even further, in Antarctica, where several seismic stations recorded “icequakes,” probably due to fracturing of the ice as the planet’s crust shook.

It’s been documented for a while that big earthquakes can affect Antarctica’s ice sheets both directly, and through generated tsunamis. Tsunamis can propagate across very long distances, pushing and shoving big chunks of ice on the frozen continent. But seismic waves can also chip away at Antarctica’s ice sheet, and that mechanism is not yet entirely understood.  Zhigang Peng, a geophysicist at the Georgia Institute of Technology in Atlanta figured it out almost by accident, while he was studying the effects of the Chile earthquake in South America.

His team was searching for the effects of surface waves – Love and Rayleigh waves.

Even though they generate very different ground movement, both Love and Rayleigh wave often generate powerful microtemblors as they travel across the surface. So, while Peng was searching for more recordings of the earthquake, he also analyzed data from Antarctica stations, and he started to observe an interesting pattern.

“We started to find tiny seismic signals that we believe are associated with ice cracking.”

It’s the first time that ice cracks have been thoroughly analyzed following a remote earthquake; the first thing which geophysicists noticed was that only Rayleigh waves (ground roll waves) generate ice quakes. After studying seismic data at 42 Antarctic stations from within 6 hours of the Maule temblor, the team found that 12 of the stations registered “clear evidence” of Rayleigh waves generated by the Chile earthquake passing through the crust beneath the ice sheet, in the form of small icequakes. Because both type of waves generate significant ground movement, but only Rayleigh waves generate ice quakes, they suspect that ice quakes are fundamentally different from earthquakes.

The study suggests a “coupling with the ground that seems to be important,” says Jeremy Bassis, a geophysicist at the University of Michigan, Ann Arbor, who was not involved in the work, but was among the first to link tsunamis with ice shelf cracking.

“I think the big picture of this is that we keep on finding out that these relatively small environmental perturbations generated far away—the ice seems to actually feel them,” Bassis says. By the time they get to the ice sheet, the signals are tiny, but they still can cause the ice to break and change a little bit. “Ten years ago, I don’t think anybody would have thought that.”

Peng admits that his results, while interesting, don’t yet paint a clear picture of what is happening in Antarctica. It’s still not clear if this is a common phenomenon, or if the earthquake (among the biggest ones on record) had some very specific circumstances.

“At this point we cannot say definitively that large events play an important role in accelerating or changing ice behaviors there,” he says.