New research led by members from the University of Southampton has identified a black hole spinning around its axis near its maximum possible speed. 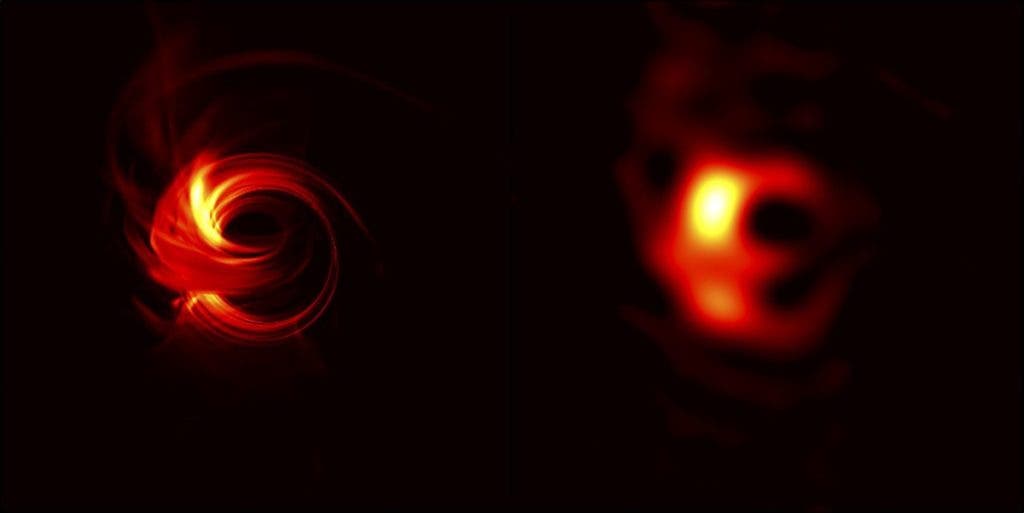 A simulated image of supermassive black hole Sagittarius A*, showing against a background of radiation and bright matter swept into the event horizon. The image was generated with data recorded by the Event Horizon Telescope.
Image credits National Radio Astronomy Observatory,

The study involved an international team of astronomers. Starting from observations taken with state-of-the-art sensors, the researchers found evidence that 4U 1630-472, a stellar-mass black hole in our galaxy, is rotating really, really fast — around 92% to 95% of a black hole’s theoretical maximum rotational speed.

Material keeps falling into this black hole as its spinning, being subjected do immense gravitational stress and temperatures. The environment is so violent that this matter shines brightly in X-rays, the team reports, which they used to establish that 4U 1630-472 is rotating and calculate its speed.

If a black hole is rotating rapidly enough, it should — according to the general theory of relativity — distort space-time around it differently than a non-rotating black hole, the team explains. Such distortions would leave a measurable trace on the radiation emitted by the matter it’s absorbing.

Therefore, researchers can look at a black hole’s emission spectra to determine the rate it’s spinning at.

“Detecting signatures that allow us to measure spin is extremely difficult,” says lead author Dr. Mayukh Pahari from the University of Southampton. “The signature is embedded in the spectral information which is very specific to the rate at which matter falls into the black hole.”

“The spectra, however, are often very complex mostly due to the radiation from the environment around the black hole.”

Dr. Pahari says the team was “lucky” to obtain a spectral reading directly from the matter falling into the black hole, sans the background noise. Armed with that data, it was “simple enough to measure the distortion caused by the rotating black hole,” he says.

The findings from this study are significant, as this is one of only a handful of times we’ve managed to accurately measure a black hole’s spin rate. Only five other black holes have shown high spin rates, the team adds. Astronomical black holes can be fully characterized by mass and spin rate. Therefore, measuring these two properties is key to understanding some extreme aspects of the universe and the fundamental physics related to them.

The paper “AstroSat and Chandra View of the High Soft State of 4U 1630–47 (4U 1630–472): Evidence of the Disk Wind and a Rapidly Spinning Black Hole” has been published in The Astrophysical Journal.