Christmas came early for physicists as the CERN facility in Switzerland report the discovery of two new baryonic particles from their LHCb experiment.

“Today the collaboration for the LHCb experiment at CERN’s Large Hadron Collider announced the discovery of two new particles in the baryon family. The particles, known as the Xi_b’- and Xi_b*-, were predicted to exist by the quark model but had never been seen before”, a press release wrote.

The Large Hadron Collider (LHC) is the world’s largest and most powerful particle collider, built by the European Organization for Nuclear Research (CERN) from 1998 to 2008. Its aim is to better understand the complex and often times counterintuitive world of particle physics, and test if the theoretical hypotheses in the Standard Model are correct. The Standard Model of Physics is a theory which mediates the dynamics of the known (and theoretical) subatomic particles. The LHC is expected to address some of the unsolved questions of physics, advancing human understanding of physical laws. The new particles named Ξ­­­_b’ – (Xi_b’ -) and Ξ_b* – (Xi_b* -) had already been predicted but this is the first time they have actually been observed.

These particles are baryons. A baryon is a composite subatomic particle made up of three quarks belonging to the family of hadron family of particles, which are the quark-based particles. The most familiar baryons are the protons and neutrons that make up most of the mass of the visible matter in the universe. These new particles are pretty similar to protons, but they contain a so-called “beauty quark“, which makes them heavier. Thanks to these quarks, they are six times heavier than protons – but this is where it starts to get a even weirder. The particles are more than just the sum of their parts – their mass depends not only on their components, but also on the way their components are configured. In quantum mechanics and particle physics, spin is an intrinsic form of angular momentum carried by elementary particles. Each of the quarks has an attribute called “spin”. In the Xi_b’- state, the spins of the two lighter quarks point in the opposite direction to the b quark, whereas in the Xi_b*- state they are aligned.

“Nature was kind and gave us two particles for the price of one,” said Matthew Charles of the CNRS’s LPNHE laboratory at Paris VI University. “The Xi_b’- is very close in mass to the sum of its decay products: if it had been just a little lighter, we wouldn’t have seen it at all using the decay signature that we were looking for.”

The particles were uncovered by the LHCb experiment – one of seven particle physics detector experiments being carried at CERN. The LHCb is focused on measuring interactions between the beauty quarks I was telling you about. Over 800 people from 60 scientific institutes, representing 16 countries are working on this experiment alone. 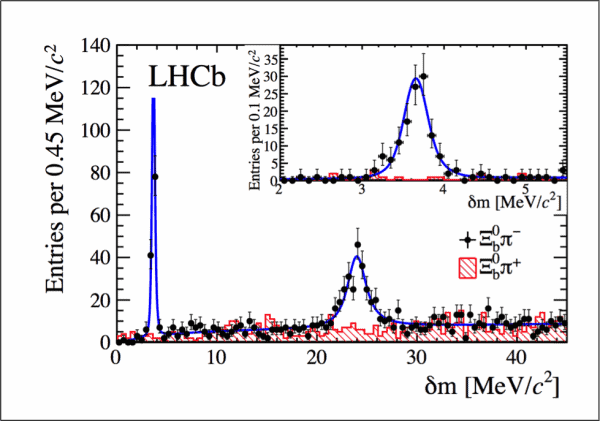 The mass difference spectrum: the LHCb result shows strong evidence of the existence of two new particles the Xi_b’- (first peak) and Xi_b*- (second peak), with the very high-level confidence of 10 sigma. Image via CERN.

“This is a very exciting result. Thanks to LHCb’s excellent hadron identification, which is unique among the LHC experiments, we were able to separate a very clean and strong signal from the background,” said Steven Blusk from Syracuse University in New York. “It demonstrates once again the sensitivity and how precise the LHCb detector is.”

Indeed, these two particles were predicted by the Standard Model, but there is much we still don’t understand about their interactions. But if we want to find out new things, we first have to understand if our theories are correct – and the LHCb helps with just that.

“If we want to find new physics beyond the Standard Model, we need first to have a sharp picture,” said LHCb’s physics coordinator Patrick Koppenburg from Nikhef Institute in Amsterdam. “Such high precision studies will help us to differentiate between Standard Model effects and anything new or unexpected in the future.”

The LHC will resume experiments in early 2015, following new upgrades which will bring the particle accelerator to near full design capability.