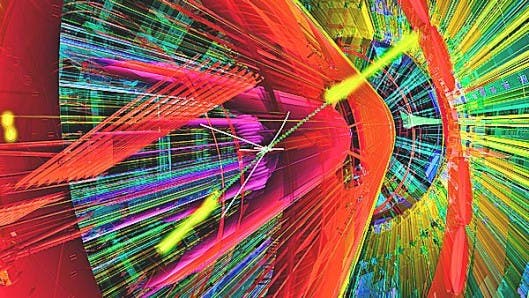 Artist’s impression of a proton-proton collision producing a pair of gamma rays (yellow) in the ATLAS detector (Image: CERN)

Inspired by the properties of the human eye, physicists have created a processor that can analyze sub-atomic particles 400 times faster than the current state of the art. The prototype might significantly speed up the analysis of data from the collisions of particles in high-end particle accelerators like the Large Hadron Collider, at CERN, as early as 2020.

Faster than the blink of an eye

The processor employs a detection algorithm that works much in the same way as the human retina. In our retinas,  individual neurons are specialized to respond to particular shapes or orientations and locally analyze these patterns. This way, the brain is never consciously aware of the processing itself and only interprets the results. Analogously, the “artificial retina” detects a snapshot of the trajectory of each collision which is then immediately analysed, according to CERN physicist Diego Tonelli, one of the collaborators who was involved in the project.

During these collisions, particles are accelerated near the speed of light and smashed together. At these extremely high energies, peculiar things start to happen and new matter is born. Each second the LHC generats some 40 million collisions and each can result in hundreds of charged particles, which are the only kind whose trajectories can be mapped. Clearly, speed is of the essence and the ‘artificial retina’ will definitely come in handy.

“It’s 400 times faster than anything existing or foreseen for high energy physics applications. If implemented in a real experiment it will allow us to collect more interesting data more quickly,” the researchers write.

The LHC received a lot of hype in recent years, after the breakthrough moment of modern physics when the Higgs boson was confirmed using the particle accelerator.  However, the ‘artificial retina’ won’t be employed for experiments that probe elementary particles, like the Higgs boson. Instead, it will be mostly used for ‘flavor physics’, which deals with the interaction of the basic components of matter, the quarks.

“When our detectors take these snapshots of the collisions – to us that’s like the picture that your eye sees and when your brain is scanning that picture and making sense of it, well we try and codify those rules into an algorithm that we run on computers that do the job for us automatically,” Prof Shears said.

“When the LHC continues… we will start to operate with a more intense beam of protons getting a much higher data rate, and then this problem of sifting out what you really want to study becomes really really pressing,” she added.

“This artificial retinal algorithm is one of the latest steps in our mission to [understand the Universe], and it’s really good, it does the job vast banks of computers normally do.”

Right now, the LHC is shutdown for maintenance, but it’s due to come back online in 2015 and resume its hunt for elusive particles. The algorithm won’t be introduced before 2020, however, when an upgrade is slated. The findings were documented in a paper published in the pre-print arXiv server.