Ocean-dwellers have to brave through heat waves too — according to a new study, much more often than we’d believed. The incidence of such events increased by 54% from 1925 to 2016, and their frequency has risen by nearly 35% over the same period, the paper reports. 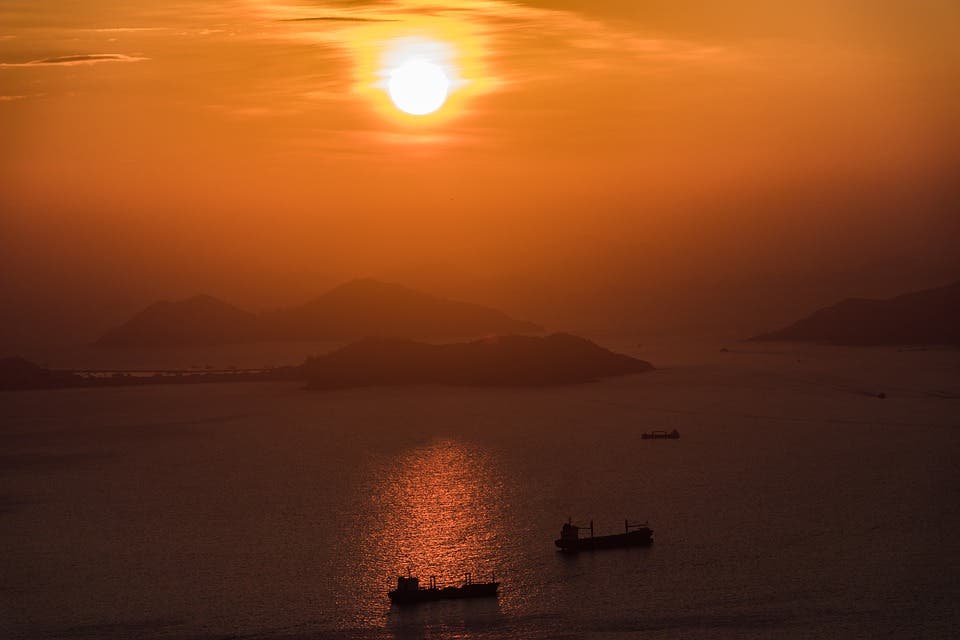 As the Earth heats up, mean ocean temperatures have also been steadily rising. This latter change makes it easier for extreme marine heating events — similar to heat-waves, but involving bodies of how water instead of air — to occur. Compared to air, however, water can absorb far more heat and is better at retaining it, making marine heatwaves long-lived periods of extreme temperatures.

One example of such an event took place in the Pacific in 2015: water temperatures surged by as much as 10 degrees Fahrenheit (5.55 Celsius) above average in an area stretching from Alaska to Mexico. It might not sound like much of a difference, but for marine life, it was almost unbearable. Animals from a number of sea-dwelling species, including sea lions and birds, died to the heat. There were also nearly 50 reported cases of whale deaths that are believed to be linked to the heatwave.

Heat waves tend to be one of the most deadly weather phenomena on dry land. One such event claimed the lives of about 70,000 Europeans in 2003, most of those deaths occurring in only two months, July and August (when the predominant rise in temperatures was recorded).

Although marine heat waves are far less studied or understood, we still do know that they are just as devastating as their land counterparts (which are set to become worse, both in Europe and the USA). Waves of extreme heat, among other things, bear the lion’s share of responsibility for coral bleaching events. For example, such events repeatedly battered Australia’s Great Barrier Reef until 2016, when one heat wave pushed the ecosystem past its limit, killing off nearly 70% of corals in a 430-mile area of (what we considered to be a) pristine reef. In essence, it was the final blow to an ecosystem already shaking after prolonged exposure to abnormally high temperatures.

To get a better understanding of such events, the team pooled together data on sea surface temperatures stretching back to over a century ago. Despite the wealth of recordings they had at their disposal, the team noted that the ‘best data’ (as in, the most reliable and comprehensive) comes after 1982, specifically satellite-recorded data collected by National Oceanic and Atmospheric Administration (NOAA) over the course of over 30 years.

The team suggests that climate-change-induced rises in global temperatures, which drove an increase in average ocean temperatures, is behind this increase in marine heatwaves. Having warmer oceans simply makes it easier for temperatures to fall to extremes and make such events possible, they note. 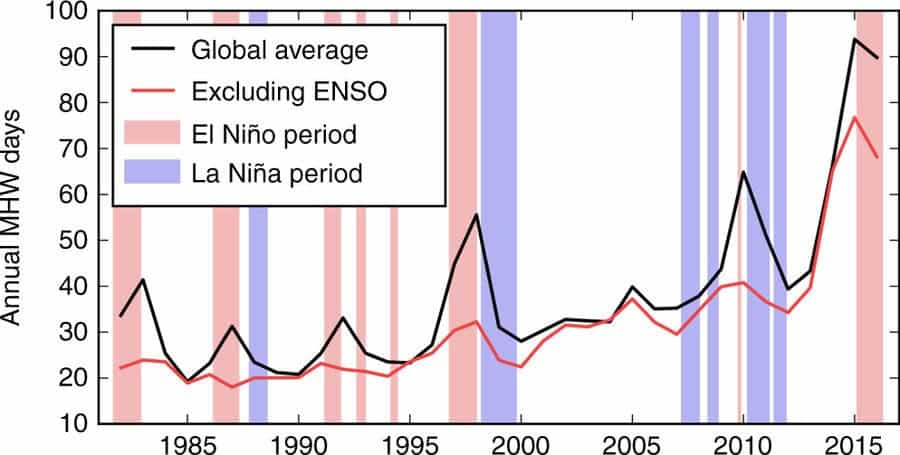 The most reliable and accurate part of the dataset (1982-2016) falls a bit on the short side, and so it can’t be used to draw an unassailable link between the two. In other words, while the findings point to anthropic climate change as the main driving force behind the increase in marine heat wave, they can’t specifically rule our natural temperature swings right now.

However, the team notes that the increase in average ocean temperatures is inarguably linked to human activity. The man-made greenhouse effects increase the overall quantity of incoming solar radiation that remains trapped, and roughly 95% of that radiation is absorbed by the oceans.

In light of how things are going right now, this means that ocean temperatures will almost certainly continue to rise this century. Though there is a global push to mitigate the release of greenhouse gases into the atmosphere, we’re still releasing a lot. The ones already floating around will also take time to break down, so it will take time for our efforts to yield results. Lastly, there’s the problem of willingness: the US, the second-largest single emitter of greenhouse gasses, and the largest per capita emitter don’t seem interested in playing ball in this regard — if anything, the current administration seems determined to undermine as many climate regulations as it can.

Still, the team is confident that a global, concerted effort to limit powerful greenhouse gas emissions would help limit the severity of ocean temperature increase.

Future extreme warming events in the oceans will be especially likely to occur during longer-term (i.e. measured in years or more) warming trends, the team notes. These include El Niño events in the Pacific Ocean and the Pacific Decadal Oscillation, which can warm vast regions of the Pacific Ocean for decades. The main concern is that — piled over the growing pollution, overfishing, and acidification issues — marine heat waves might push tip the ocean’s ecosystem beyond their tipping point.

The paper “Longer and more frequent marine heatwaves over the past century” has been published in the journal Nature Communications.