The metric system is due for a mass makeover, as scientists are preparing to redefine four basic units by the end of 2018 in an effort to provide accurate measurements at all scales.

The shift will most notably affect the kilogram, the base measure of mass and the last member of the International System of Units still defined by a physical object. Current efforts are under way to check and fine-tune measurements of fundamental natural quantities — such as Avogadro’s number — for use in giving the kilogram a new mathematical definition. 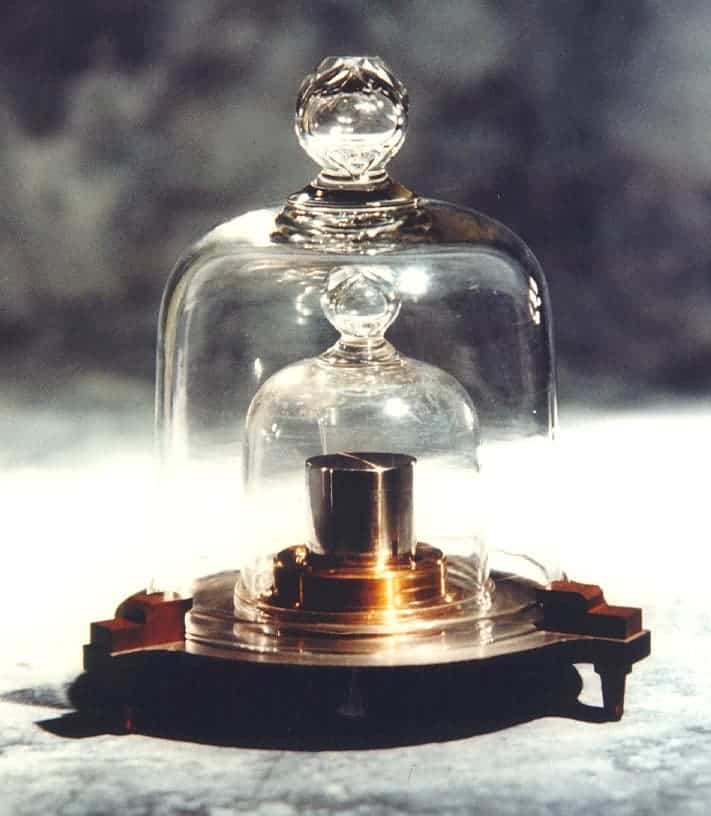 The kilogram standard.
Image via itsoktobesmart

How do we define a kilogram, and how will this change?

Since 1889, the standard for mass has been a 1-kilogram cylinder of platinum and iridium metal at the Bureau International des Poids et Mesures in Sèvres, France. While this standard is handled carefully, it’s at risk of becoming dirty or damaged, says Michael Stock, a physicist at the French bureau.

“Any material object can change over time,” he says.

“It’s also hard to accurately scale this physical standard down to very small masses, like those of electrons,” added physicist David Newell of the National Institute of Standards and Technology (NIST) in Gaithersburg, Md.

Scientists aim to give the kilogram a new definition based on nature’s fundamental physical constants. This task requires a highly accurate measurement of Planck’s constant, which links energy and frequency. Planck’s constant can be used to measure and describe mass, as the two are mathematically linked through another natural constant, the speed of light. 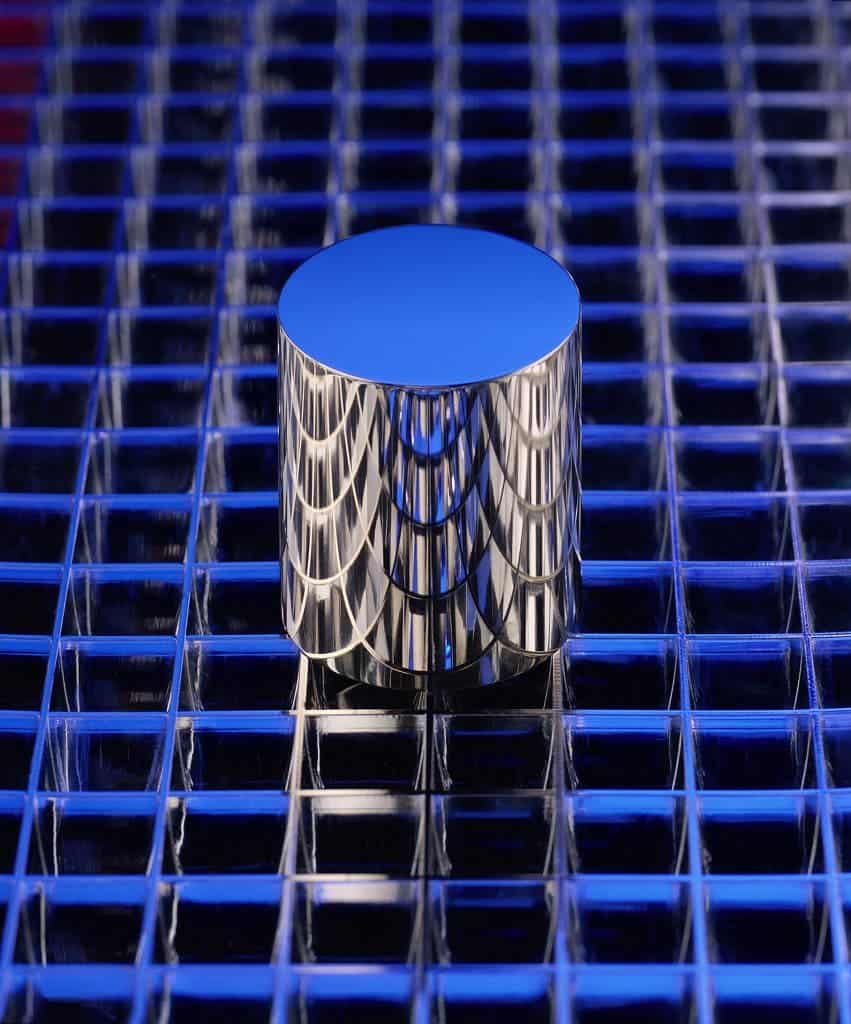 Researchers are using the existing physical definition of a kilogram to measure Planck’s constant as accurately as possible. Then, this value can be set in stone and used to define mass in the future. 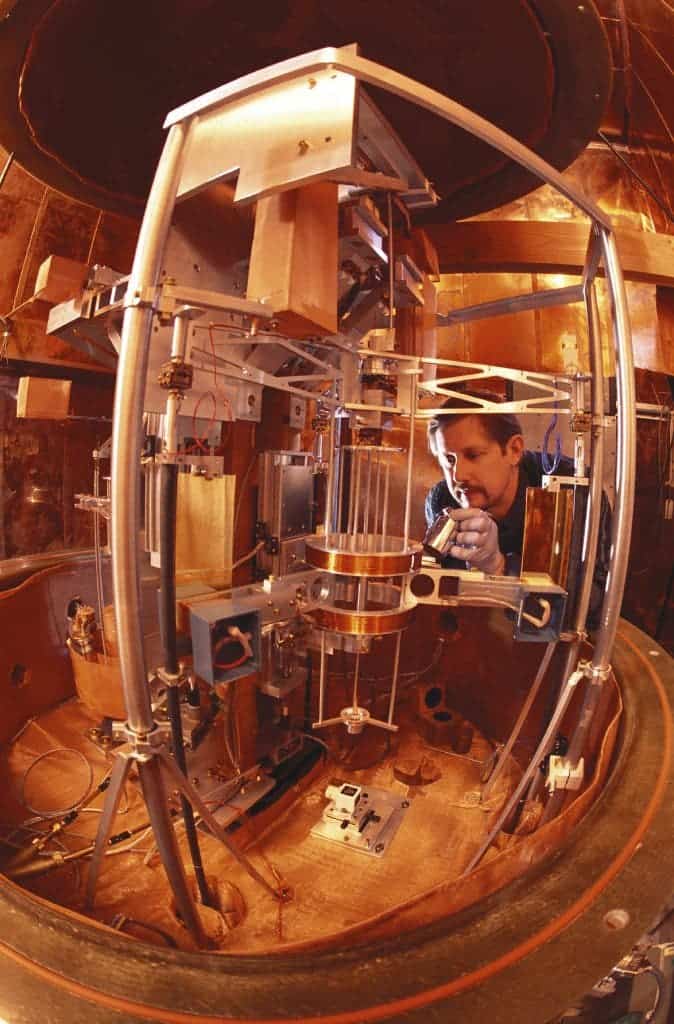 A watt balance. And a dude.
Image credits Robert Rathe

In another approach, scientists count the number of atoms in extremely pure 1-kilogram silicon spheres. This method determines the number of atoms in a kilogram, which could be used to define the unit of mass. This technique also allows scientists to calculate a different fundamental value, the Avogadro constant (or Avogadro’s number). This constant describes the number, roughly 6.02 x 1023, of units per mole, the metric unit for amount of a substance. (A mole is the mass of a substance equal to its atomic or molecular weight expressed in grams.) A precise Avogadro constant can be used to calculate and confirm Planck’s constant.

When the new value and its uncertainty is averaged with previous calculations, the Avogadro constant comes out to 6.02214082 x 1023 per mole with an uncertainty of 18 parts in a billion, scientists report July 14 in the Journal of Physical and Chemical Reference Data. This number is just slightly smaller than the value of the constant currently described by NIST — 6.022140857 x 1023 per mole.

The watt balance and atom-counting techniques now give a nearly identical value of Planck’s constant, currently given by NIST as 6.6260704 x10-34 joule-seconds, with an uncertainty of under 20 parts in a billion, says metrologist Ian Robinson of the National Physical Laboratory in Teddington, England. Further measurements are still under way.

Where is the metric system headed?

In fall 2018, international delegates at a meeting of the General Conference on Weights and Measures will decide whether or not to approve the kilogram’s new definition. Based on existing plans, many believe the redefinition will happen at this time, Stock says, though nothing is guaranteed.

Because researchers’ careful calculations have accounted for the existing definition of mass, the redefinition should cause no perceptible shift in measurement.

“If we do our jobs right, nobody’s going to notice a thing,” Newell says. But future mass measurements should become stable, Robinson says.

While redefining the kilogram will be the most critical change ahead, Stock says, scientists also hope to redefine other units, including the mole and the kelvin, which measures temperature. These redefinitions will depend on fixing other constants, including the Avogadro constant. Making all of these changes at once will limit the number of times textbooks must be changed, Stock says.

The redefinitions won’t mark an end to the quest for a perfect metric system, Newell says.

“Metrologists are going to make the measurement exactly right. And the corollary is, they never finish their measurement.”