A cataclysmic collision with an enormous cosmic body twice the size of Earth may have caused Uranus to tilt and could explain its freezing temperatures. 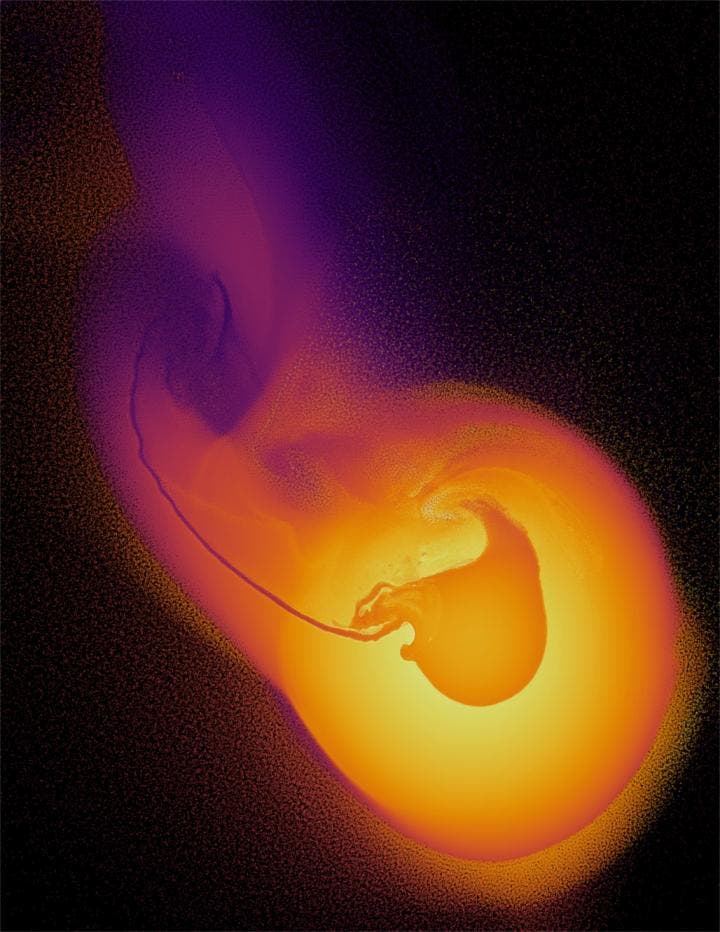 The collision with Uranus of a massive object twice the size of Earth caused the planet’s unusual spin. Credit: Jacob Kegerreis/Durham University.

Uranus’ spins on its side, its axis pointing almost at right angles relative to all the other planets in our solar system. This behavior suggests that the planet almost certainly got knocked over by some giant impact, so the real questions astronomers have been asking are how all of this panned out and how else such a violent impact affected the planet.

Jacob Kegerreis and colleagues at Durham University’s Institute for Computational Cosmology performed over 50 different high-resolution computer simulations of massive collisions with the gas giant in order to answer these questions.

The conditions that lead to outcomes that most closely resemble what Uranus is doing right now suggest that the planet was most likely impacted by a young proto-planet mode of rock and ice during the solar system’s chaotic formation about 4 billion years ago. Since Uranus is so massive — it has about 14 times the mass of Earth and is around four times larger in radius — whatever hit the planet was huge, and scientists think it used to be between two and three Earth-masses.

According to the same simulations, the impact could have also released debris that formed a thin shell around the edge of the planet’s ice layer, trapping heat emanating from the planet’s core. This can partly explain Uranus’ ungodly cold temperature in the outer atmosphere, which averages around -216 degrees Celsius (-357 degrees Fahrenheit). Some of Uranus’ 27 moons — including 13 so-called ‘inner moons’ — might have formed as a result of the spewed debris.

“Our findings confirm that the most likely outcome was that the young Uranus was involved in a cataclysmic collision with an object twice the mass of Earth, if not larger, knocking it on to its side and setting in process the events that helped create the planet we see today,” Kegerreis said in a statement.

The collision wasn’t head-on. The cosmic body grazed Uranus instead, allowing the planet to retain the majority of its atmosphere. However, it was enough to affect the planet’s tilt. 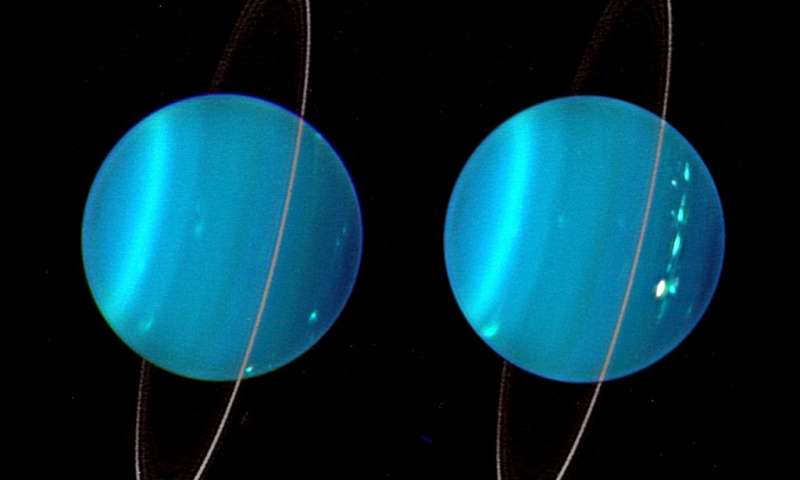 2004 infrared composite image of the two hemispheres of Uranus obtained with Keck Telescope adaptive optics. The planet is tilted at almost a 90-degree angle with respect to the other planets in the solar system. Credit: Lawrence Sromovsky, University of Wisconsin-Madison/W.W. Keck Observatory.

The impact could have created molten ice and lopsided lumps of rock inside the planet, explaining not only Uranus’ excentric tilt but also its off-center magnetic field.

Such planetary collisions, dramatic as they may sound, used to be quite common in the early solar system. Earth’s moon, for instance, is thought to have formed following a violent impact with a Mars-sized body.

Besides helping astronomers better their understanding of Uranus, the new study might also offer valuable clues as to how planets outside the solar system — called exoplanets — form and evolve.

The findings appeared in the Astrophysical Journal.