A novel analysis reveals T-rex and other theropods – the top land predators that dominated the planet for no less than 165 million years – had teeth of unrivaled complexity. The long and powerful teeth were serrated like steak knives to disembowel prey easily, while on the inside tissue supported the teeth for maximum resistance against the powerful sheering stress which followed each bite. 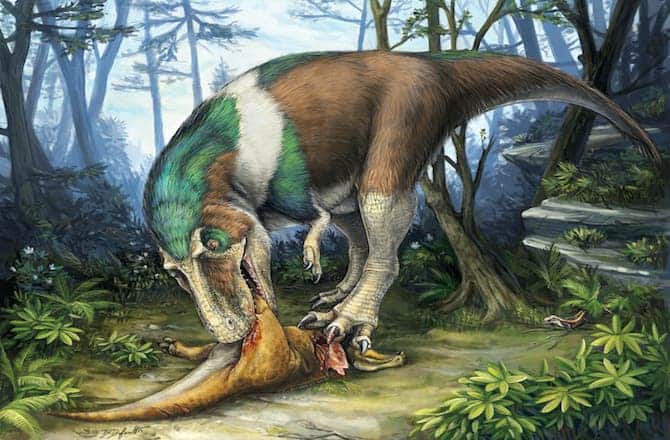 Over millions of years, theropods developed an unrivaled arsenal. Though not very fast, these huge beasts would overwhelm any prey, no matter how large, which had the misfortune of encountering a theropod. Among the fossil teeth analyzed by University of Toronto Mississauga paleontologist Kirstin Brink and colleagues were those belonging to the smaller Coelophysis and bird-like Troodon, but also large predators Allosaurus, Gorgosaurus, Daspletosaurus, Tyrannosaurus and Carcharodontosaurus, along with those of semi-aquatic Spinosaurus.

“[..] The serrations were most efficient for piercing flesh and gripping it while ripping off a chunk of meat, called the ‘puncture and pull’ feeding style,” Brink said.

A detail of a thin section through the tooth of a large theropod, Gorgosaurus, from Alberta. Credit: Danielle Dufault

The researchers carefully section fossilized teeth, either alone or confined in the ribs and other bones of prey, then used a scanning electron microscope and a synchrotron. This offered an unprecedented view both of the meat eaters’ tooth structure and chemical composition. Like a very strong saw, the teeth of T-rex and its cousins were disposed in a manner that allowed each teeth to be supported by those surrounding it. When and if a tooth happened to come out, it would be replaced. T-rex, for instance, took two and a half years to grow a new tooth.

“It could take up to two years for a tooth to grow back in the big theropods like T. rex. Therefore, having specially reinforced teeth means less tooth breakage and less gaps in the jaw, leading to more efficient eating,” Brink said.

Today, only one animal with serrated teeth is still alive: the infamous Komodo dragon. The 10 foot long Indonesian lizard has teeth that closely resemble those of ancient theropods. It uses them to chomp  huge prey, life buffalo. Interestingly enough, the Komodo isn’t a descendant of dinosaurs and evolved its serrated dentures independently.