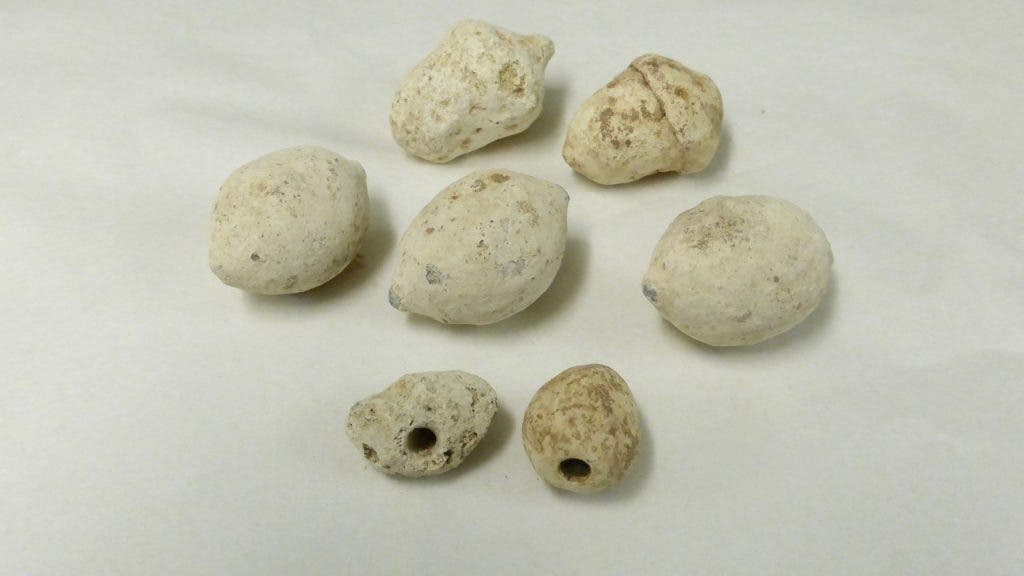 Burnswark Hill, in Dumfriesshire, Scotland, is perhaps one of the best places on Earth to build a fort. Indeed, archaeologists have found here evidence of a 17-acre hillfort, but also two Roman camps. Digging deeper a startling find emerged: small sling-bullets each with a hole carved inside. What purpose could the hole serve? After replicating the bullets and conducting field tests, the archeologists would soon learn these were in fact very ingenious weapons of terror. As they whizzed past ramparts, the holed-bullets  whistled, “or more accurately gave off a mechanical buzzing sound eerily reminiscent of an agitated wasp,” archeologists said. 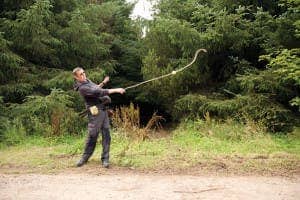 The Romans used a variety of projectiles for their slingshots. There’s the 20-gram lemon-shaped Type I, and Type II which resembles an acorn and weighed about 50 grams. Now, archaeologists at the National Museum of Scotland and the Dumfries Museum have identified Type III: grapefruit-shaped red sandstone missiles, weighing on average 30 grams, with a single circular hole etched 5mm in depth and 5mm in diameter.

Alan Wilkins, an expert on Roman artillery, says the flat area would be positioned on torsion catapult, stabilizing the bullets prior to shooting. Their main purpose was anti-personnel use during sieges. Surely, these would have packed a nasty punch, but when the archeologists conducted a ballistics test using technology available to the Romans some 1,800 years ago everyone was surprised to see, or better said hear, what Type III could do.

“You don’t just have these silent but deadly bullets flying over; you’ve got a sound effect coming off them that would keep the defenders’ heads down,” John Reid of the Trimontium Trust, a Scottish historical society directing the first major archaeological investigation in 50 years of the Burnswark Hill site, told Live Science. “Every army likes an edge over its opponents, so this was an ingenious edge on the permutation of sling bullets.”

The whistling bullets were smaller than the typical slinging variety the Romans used. Researchers think the Romans would load several of these in their slings so they could hurl multiple projectiles at a target with only one throw. About 20 percent of the bullets found at Burnswark had holes drilled in them. “It’s a tremendous amount of work to do, to just chuck them away,” Reid said.

You can listen to how the Type III bullets must have sounded like below.