With drug-resistant bacteria being more dangerous than ever, we need all the help we can get. 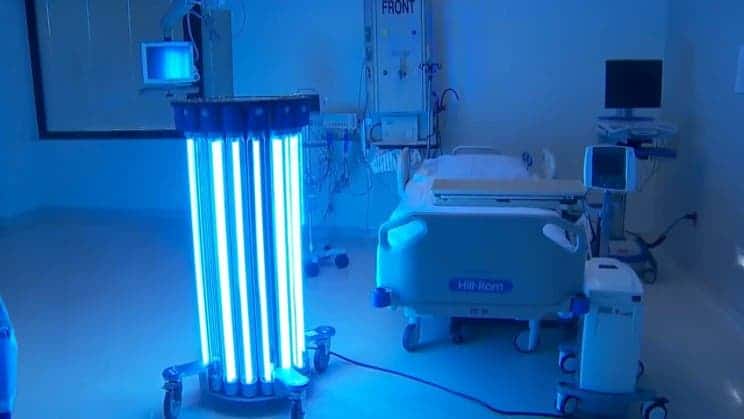 Technology could help temper this ever-growing problem — hospital infections are running rampant, but they may be pushed back by ultraviolet (UV) Robots.

Current cleaning techniques, almost always manual, are nearly helpless in tackling resilient bacteria. This is where the disinfection robots enter the stage.

At certain wavelengths, UV light is mutagenic to bacteria, viruses, and other microorganisms. Particularly at wavelengths around 260 to 270 nanometers (the visible range is around 380 to 750 nanometers), UV light breaks molecular bonds within microorganismal DNA, severely disabling or killing the organisms.

The use of UV as a disinfectant isn’t new. It’s been used in medical sanitation and sterile work facilities since the mid-20th century, and more recently, it’s also been used to sterilize drinking and wastewater facilities.

Now, researchers have fitted UV lamps on disinfection robots which ensure full-room sterilization. Nursing homes, field hospitals, and biohazard zones could all be sterilized in a matter of minutes. The robots are faster and more efficient than human workers, and their ability to move around enables them to cover the entirety of the room, including shadowy areas and corners, as well as door handles and bed frames.

Infection Prevention Technologies (iPT), the company which built the robot, has reportedly tested the technology and found that after 10 minutes, the rooms were completely sterilized. This could go a long way towards reducing hospital infections.

“A 6-month, hospital-wide study showed a 34% drop in the incidence of healthcare associated infections with the use of the IPT 3200 UV robot and specially trained disinfection teams.” iPT claims.

Results have been presented in a new paper.

“One of the problems facing our healthcare system is hospital-associated infections,” says Nicholas Fitzkee, an independent scientist of the paper. Infections cost “thousands of lives and billions of dollars annually”, he adds.

Another advantage of the technology is that it requires minimal human intervention: just one person to guide and monitor the robot.

At the currently used levels, the radiation is harmless to humans. However, it’s still recommended that humans exit the room during the sterilization process.

According to the World Health Organization, drug-resistant pathogens are one of the biggest threats to mankind, and things are only expected to get worse. The CDC also warns that unusual germs with unusual drug-resistance are now widespread in the US. Technologies such as UV sanitizing could go a long way towards fighting that problem where it matters most (hospitals) and kill off some of the most resilient pathogens.