Harvard roboticists made an insect-like flying robot that perches on ceilings to save energy, like bats, birds or butterflies. To ‘rest’ on these surfaces, the RoboBee uses electrostatic adhesion instead of sticky adhesives or latching with talons, but works just as well.

“Many applications for small drones require them to stay in the air for extended periods,” said Moritz Graule, a researcher at the Harvard John A. Paulson School of Engineering and Applied Sciences (SEAS) and Harvard’s Wyss Institute for Biologically Inspired Engineering. “Unfortunately, smaller drones run out of energy quickly. We want to keep them aloft longer without requiring too much additional energy.”

For their delicate flying RoboBee, no bigger than a quarter coin, it made more sense to use an electrode patch that electrostatically ‘sticks’ to a surface than anything fancy with moving parts. You’ve seen it work all the time when you rub a wool sweater to a balloon, for instance.

[panel style=”panel-info” title=”What is static electricity?” footer=””]When two different materials come into close contact, for example, felt rubbing against a balloon or two air masses in a storm cloud, electrons may be transferred from one material to the other.

This accumulation of imbalanced charges on objects results in the phenomena we commonly refer to as static electricity. [/panel]

When wool is rubbed against a balloon, the latter becomes negatively charged. If you then bring the balloon close to a wall, it will stick. This works for only a little while, though, since the charge dissipates over the time. 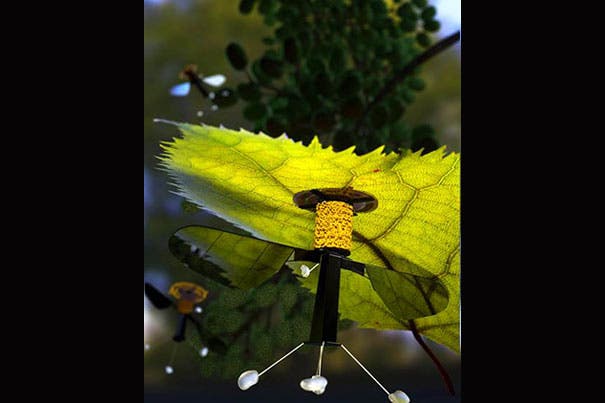 Image by Peter Allen/Harvard John A. Paulson School of Engineering and Applied Sciences

This is why the Harvard researchers pumped a small amount of energy into the electrode to keep the negative charge going. Yes, this requires power, but makes flying more efficient in the long run. The patch required 1,000 times less power to perch than typically required to hover, the researchers write in the journal Science.

“One of the biggest advantages of this system is that it doesn’t cause destabilizing forces during disengagement, which is crucial for a robot as small and delicate as ours,” said Graule.

“When making robots the size of insects, simplicity and low power are always key constraints,” said senior author of the study,  Robert Wood, Charles River Professor of Engineering and Applied Sciences at SEAS and the Wyss Institute.

Because the electrode is only attached to the top of the robotic bee, the flying gizmo can only attach itself to ceilings. An upcoming version should be able to stick to any surface.

One thought on “Flying quarter-sized RoboBee perches to save energy”