A team from IBM Research dramatically increased the storage capacity of an alternative memory structure called phase-change memory (PCM) to 3 bits of data per cell. Many specialists think that PCM is the future, in a way similar to how flash is replacing hard drives. 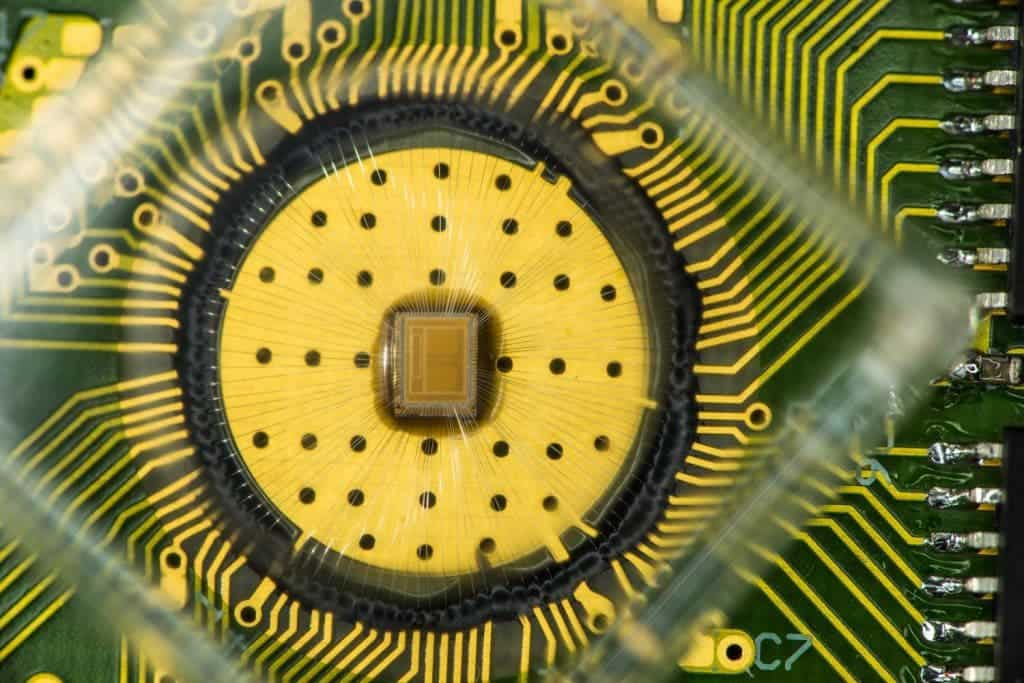 The experimental multi-bit PCM chip used by IBM scientists is connected to a standard integrated circuit board. The chip consists of a 2 × 2 Mcell array with a 4- bank interleaved architecture. The memory array size is 2 × 1000 μm × 800 μm. The PCM cells are based on doped-chalcogenide alloy and were integrated into the prototype chip serving as a characterization vehicle in 90 nm CMOS baseline technology. Credit: IBM Research

To store digital information comprised of “1s” and “0s”, a predictable physical deformation has to take place. Inside an HDD, a “head” moves over a spinning platter with a thin magnetic coating writing 0’s and 1’s as tiny magnetic North and South. To read the data, the head hovers over the spots and reads the 0’s and 1’s by noticing the North and South spots.  Flash drives are storage devices like hard drives but with one key difference:  they use flash memory chips that are small, light and have no moving parts, instead of the head and platter.

To work with bits, basically, you need to have a state or phase change that says this thing is turned “on” or “off”, “up” or “down” and so on.  Phase-change memory (PCM) works by reading two stable states in a material that can be either “amorphous” (no clearly defined atomic structure) and “crystalline” (ordered atomic structure). A PCM actually reads the resistance of the two states (high for amorphous and low for crystalline) which changes with an applied current. A high or medium voltage is applied to the material to “write” and a low voltage to “read”.

Like HDDs and flash drives, PCM is non-volatile, meaning the information remains as initially stored even after the electrical power is cut. Phase change memory has much lower latency than NAND, much faster read/write times and can endure at least 10 million write cycles. The average flash USB stick fails after 3,000 write cycles.

“Phase change memory is the first instantiation of a universal memory with properties of both DRAM and flash, thus answering one of the grand challenges of our industry,” said Dr. Haris Pozidis, an author of the paper published in IEEE. “Reaching three bits per cell is a significant milestone because at this density the cost of PCM will be significantly less than DRAM and closer to flash.”