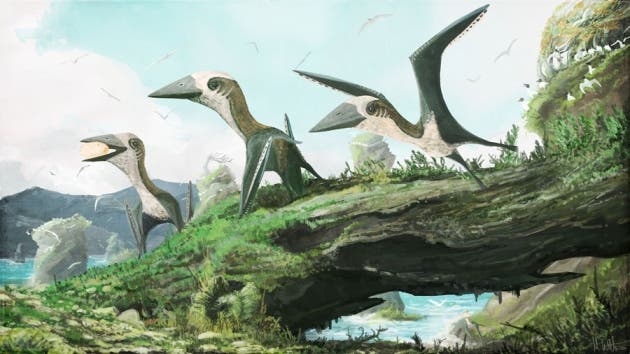 For millions of years, flying reptiles called pterodactyl or pterosaur ruled the skies. All across the globe, some 130 valid pterosaur genera have been identified so far, after nearly 200 years of research. Most of them were large, some boasting wingspans of 10 meters or more. But a newly discovered species of these ancient flying reptiles in Hornby Island, British Columbia was much smaller, closer to the size of an albatross or as tall as a housecat.

“It’s quite different from other animals we’ve studied. There hasn’t really been evidence before of small pterosaurs at this time period,” says Elizabeth Martin-Silverstone, the study’s lead author and a palaeobiologist at the University of Southampton, UK.

Two fragments were unearthed by paleontologists, including part of a humerus out of which Martin-Silverstone and colleagues carefully removed a slice, then put it under the microscope. This gave them an idea of the growth stage the individual was currently in. Coupled with the fact that the vertebrae were fused together, the scientists concluded the flying reptile was an adult and a small one too. 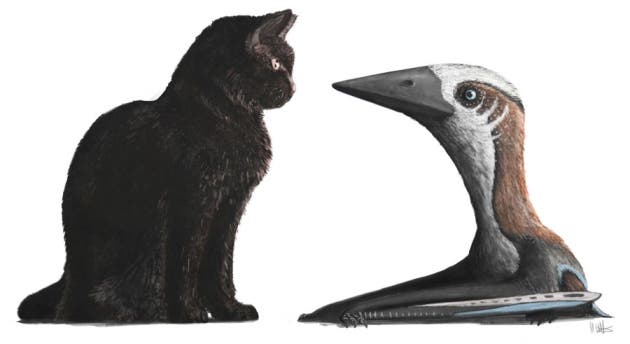 The flying reptile was as tall as a house cat. Credit: Mark Witton

The bones of pterosaurs like those of birds are hollow, to promote lift. This also make them very hard to preserve, making pterosaur fossils hard to come by. From what we’ve found so far, scientists have come to the conclusion that the flying reptiles grew bigger and bigger in size with the eons. The biggest found so far was the size of a small plane and lived during the late Cretaceous period. Yet the newly found, and yet unnamed, pterosaur has a wingspan of only 1.5 meters although it lived 77 million years ago, also in the late Cretaceous.

Only a few fragments were found, so the British researchers can’t definitely say for sure that their specimen lived alongside larger pterosaurs or if it’s even a pterosaur. They do have some pretty solid hints to work with, though. The fused backbone suggests this wasn’t a bird. It wasn’t some marine dinosaur either, like a nyctosaur, because the arm bone lacks the distinctive hatchet-shaped crest, the paleontologists reported in the journal Royal Society Open Science.

Read more: the tiny Chinese pterodactyl, and the Isle of Wight pterosaur.

Not too long after the giant asteroid impact from 66 million years ago that wiped out the dinosaurs, pterosaurs also went extinct. Smaller species, like birds and mammals, survived and later occupied all the free ecological niches left in the wake of the mass extinction. Did this tiny pterosaur survive too, given its size? If not, it means that being small isn’t enough — there’s more to it.

“They have plenty of new material to determine that this is a new species of pterosaur,” says Michael Habib, a palaeontologist at the University of Southern California in Los Angeles. “If there’s one, there were probably others. Then we’d need to rethink what we previously thought about survivability of these little ones.”