A 100-meter cliff on Comet 67P was caught by the Rosetta’s spacecraft’s cameras as it dramatically collapsed. It’s the first time a landslide on a comet was documented. 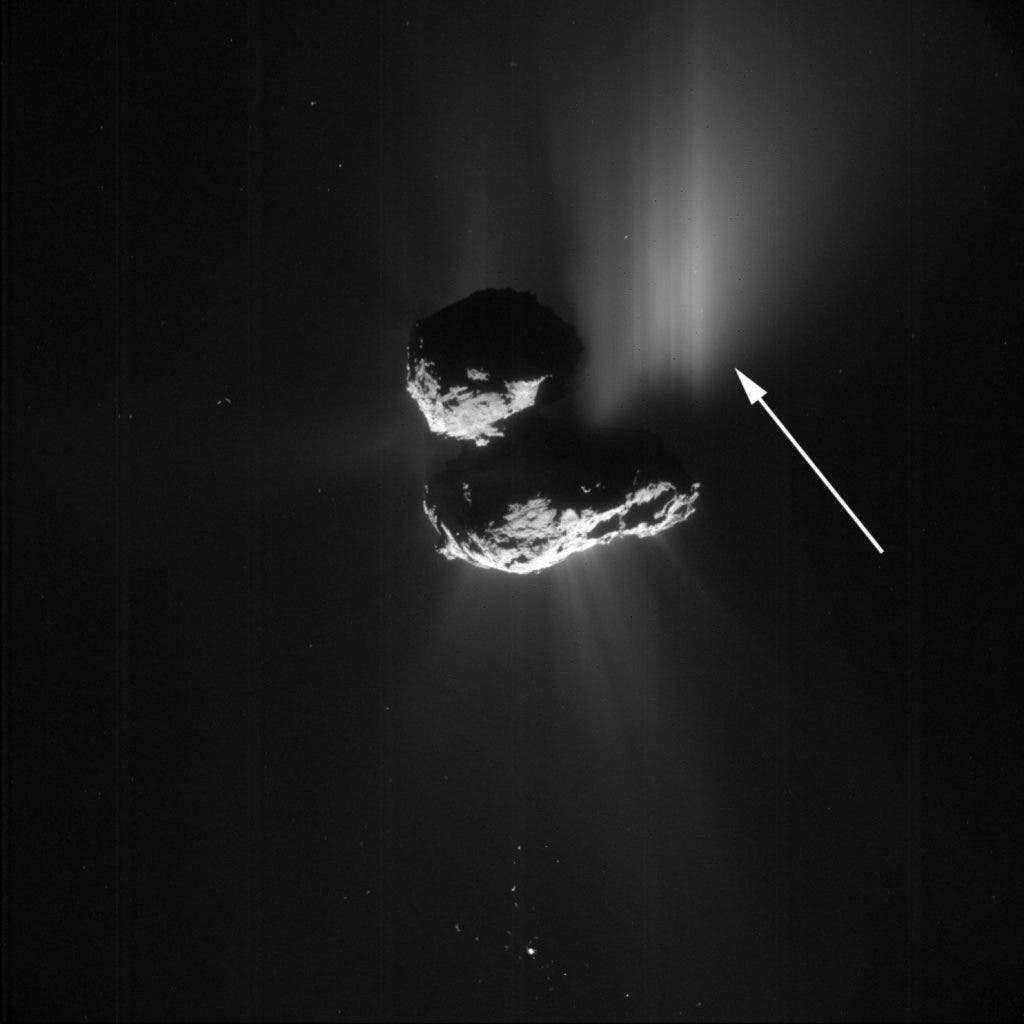 This image taken on July, 2015, shows a white outburst emanating from comet 67P. The bright flash is radiating ice exposed by a cliff which collapsed. Credit: ESA/Rosetta/NavCam

A while ago, Maurizio Pajola, an astronomer at the Nasa Ames Research Center, California, was up late at night casually browsing images taken by the famous Rosetta spacecraft when he came across something strange. He saw a bright patch emanating out of the comet’s dim surface in a photo taken by ESA’s spacecraft in December, 2015. So Pajola went through the catalog of images that focus on the region in question, a cliff called Aswan. He eventually came across an image snapped in on July 10, 2015 were a large plume of dust was showing. A snapshot taken just five days later clearly showed the cliff had collapsed, linking the bright outburst to the landslide. In the wake of the landslide, a giant 70 metres-long by one metre-wide fracture was carved.

When the cliff collapsed, it exposed a patch of pristine ice which radiated strongly which explains the bright features at the top of Comet 67P that Pajola had initially witnessed. 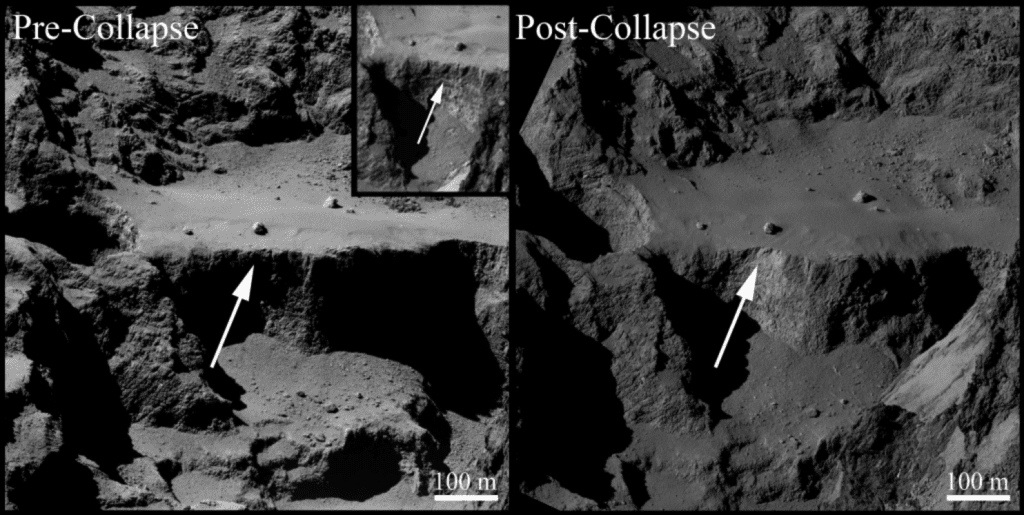 A 70 metre-long, 1 metre-wide fracture was created in the wake of the cliff’s collapse. Take a moment to appreciate how sharp these images are — taken by a spacecraft orbiting a freaking comet millions of miles away from Earth. Credit: ESA.

Previously, scientists had thought such outbursts, seen before in other comets, were the result of pressurized gas that blasted through the comet’s warm interior. Now, astronomers need to rethink the mechanics of such events often observed in comets which come too close to the sun.

In the same study published in Nature Astronomy, Pajola and colleagues simulated the conditions on the surface of the comet at the time when the cliff collapsed. Around July 2015, temperatures sharply rose from an ungodly -143 degrees Celsius to scorching 46 degrees celsius in only 20 minutes as the comet dropped from the shadow and came face to face with the sun’s rays. Every 12 hours, the cliff was directly exposed to the sun for one and a half hours. This tug of war of expansion/contraction triggered by the temperature gradients eventually cracked the cliff causing it to collapse.

“This is the most compelling evidence that we have that the observed outburst was directly linked to the collapse of the cliff,” said Maurizio Pajola, an astronomer at the Nasa Ames Research Center, California, and the study’s lead author.

The findings yet again confirm that comets aren’t just benign chunks of dust and ice — they’re very much geologically active, Pajola says. Cliffs collapse, boulders roll, dust migrates all the time. There are even sinkholes. A lot of things are happening.

After two years spent orbiting around comet 67P, which culminated with landing a robotic probe on the comet’s surface, the 12-year-long mission came to an end last year, in September. Data gathered by the probe, such as the high-resolution images analyzed by Pajola and colleagues is still keeping scientists busy, however. Science will likely benefit from Rosetta for another decade underscoring its importance.