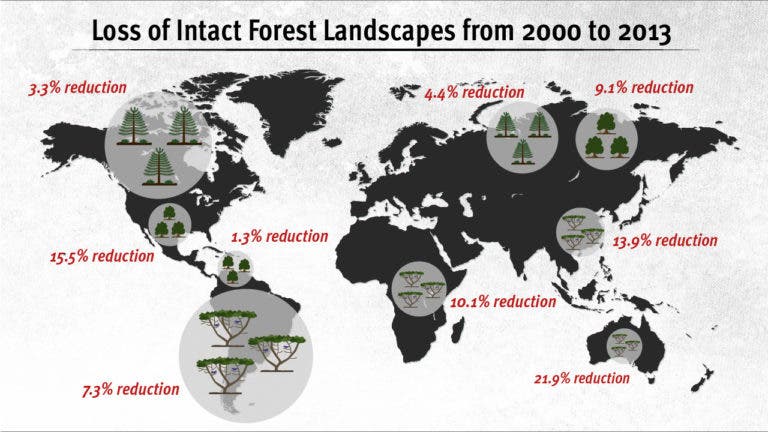 Today, most of the world’s forests are completely altered and only a few virgin forests remain. These original forests have been lost to conversion, logging, and forest management. The few intact forests landscapes (IFL) that remain are dwindling at a rapid pace in line with humanity’s rising carbon footprint. A recent study suggests that between 2000 and 2013, 7 percent of the world’s IFLs have been lost.

IFLs are extremely important from an environmental perspective. Not only do these suck and store large amounts of carbon from the atmosphere, they’re also home to many animal and plant species. IFLs can also prove critical for shuttling water resources through the ecosystem. These pristine landscapes are also valuable from a benchmarking perspective. Simply put, they offer a reference for what a real, natural ecosystem ought to look like. This image seems to be increasingly difficult to conjure, according to Lars Laestadius, a forester at Laestadius Consulting in Silver Spring, Maryland, and lead author of the paper published in Science Advances. 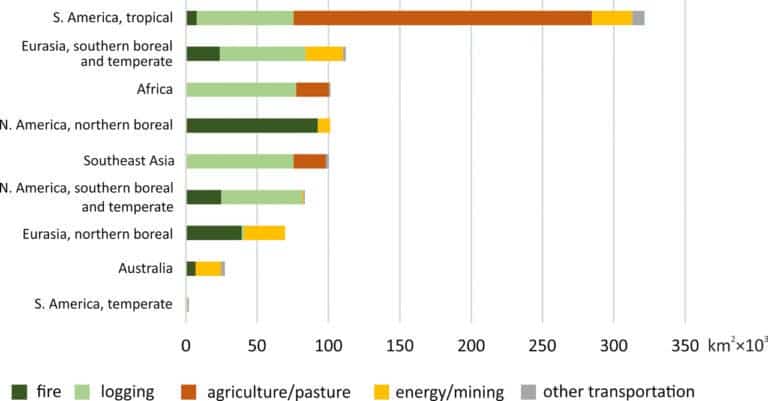 Laesadius and colleagues from the University of Maryland used satellite images collected since 2000 to identify which landscapes fall under IFL. The satellite-eye view made it look very clearly that few places on Earth have been spared by humanity’s impact.

The IFLs that were flagged from the satellites images had 20 percent or greater tree canopy cover and were spread over a surface of at least 500 square kilometers. After tallying all the pristine forests in the world, the researchers concluded that some 919,000 square kilometers (354,828 square miles) of IFLs that were present in 2000 were gone by 2013. That’s equivalent to a forest as large as the country of Venezuela.

The worst damage seems to be in the tropics where two-thirds of the loss occurred. What’s more, things are getting worse as the rate of decline is accelerating. In equatorial Africa, South America, and Southeast Asia, three times as many IFLs have vanished between 2011 and 2013 compared to 2001 to 2003.

If this trend continues, some countries might lose their IFLs completely. Paraguay, for instance, lost 80 percent of its IFLS since 2000 while Brazil saw 157,000 fewer square kilometers of IFLs within its borders. Cambodia lost 38 percent, according to the study. At this rate, Paraguay, Cambodia, Laos, and Equatorial Guinea will become devoid of untouched forest landscapes by the 2030s. 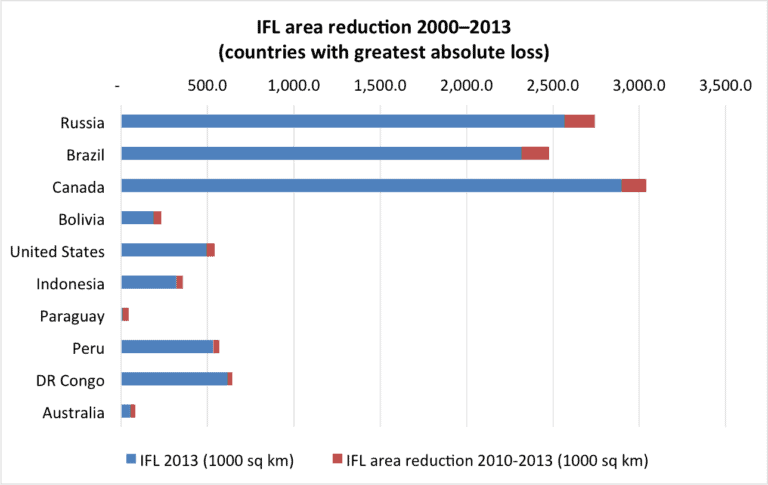 The study ends on an optimistic note as their forest management analysis suggests some countries are making progress. Brazil, for instance, has put in place far stricter regulations for soy farmers and cattle ranchers, which are the prime drivers of deforestation. Designating IFLs are protected reserves or parks also seems to offer protection but only against timber exploitation. Poor results were reported when IFLs were threatened by agricultural expansion. Much heralded certification schemes like the Forestry Stewardship Council (FSC) also fell short. For instance, Central African countries lost just as much or more IFL area from certified concessions as from uncertified ones, Mongaby reported.