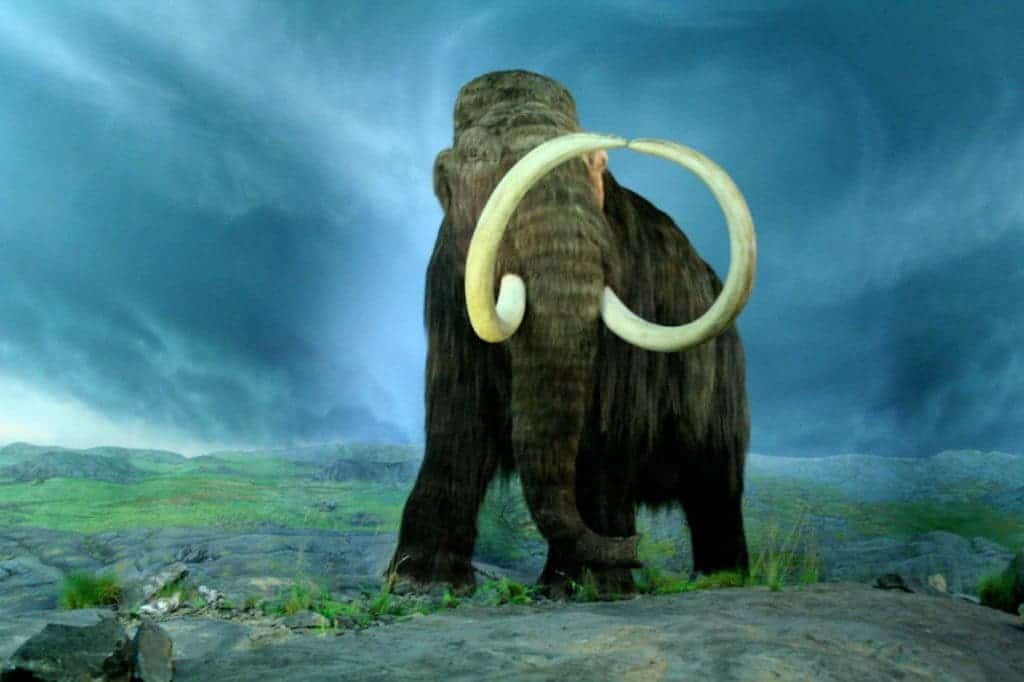 Humans likely had an important role to play in the extinction of the wooly mammoth. Credit: Wikimedia Commons.

During the late Pleistocene, about 125,000 years ago, some of the world’s largest and most impressive mammals suddenly started disappearing. This was a time when huge beasts collectively known as megafauna roamed the planet; animals like a hornless rhino that was ten times bigger than today’s living variety or a short-faced bear that would have towered over the mighties grizzlies. But even such terrifying megafauna was no match for a seemingly inconsequential-looking species: Homo Sapiens.

Paleontologists studied the entire mammal fossil record from 65 million years ago — after the dinosaurs became extinct following a giant asteroid impact — up to present day. They found that for the most part, being large was not correlated to a heightened risk of going extinct — not until a new apex predator arrived on the scene: Homo Erectus. This 1.8-million-year-old human ancestor disrupted ecosystems with its novel tool use and group hunting style.

Before Homo Erectus, hominids were mostly vegetarians. Afterward, their diet became increasingly dependent on meat, which offered far more bang for the buck, calories-wise. But even so, it made economic sense to go after the biggest, loudest animals out there. A hare might feed a small family for a day but a woolly mammoth, well, that’s enough food for the whole tribe.

When humans arrived, large mammals were really done far. According to lead author Felisa Smith, a paleontologist at the University of New Mexico, and colleagues, the mammals that disappear tend to be 100 to 1000 times bigger than those that survive, a pattern that occurred on every continent except Antarctica throughout the last 125,000 years.

Two centuries from now, the world’s largest mammal could be a cow

It’s not like it was too difficult for very well organized human hunters to drive such species extinct. The larger the mammal, the harder it is for it to reproduce (i.e. longer breeding cycles), and it was not like humans had to hunt down every last one specimen of a species — it’s enough to stress a population just enough to keep the fertility rate below the replacement rate. Eventually, the population collapses along with an entire species.

“It wasn’t until human impacts started becoming a factor that large body sizes made mammals more vulnerable to extinction,” said the University of Nebraska-Lincoln’s Kate Lyons, who authored the study with Smith and colleagues from Stanford University and the University of California, San Diego.

“The anthropological record indicates that Homo sapiens are identified as a species around 200,000 years ago, so this occurred not very long after the birth of us as a species. It just seems to be something that we do.

By around 15,000 years ago, the average mass of North America’s mammals had fallen from 216 pounds to just 17 pounds, roughly the size of a Yorkshire terrier. When the researchers made some extreme assumptions, such as presuming that all currently listed mammals as endangered or threatened will become extinct, they found that biggest mammal on the planet 200 years from now will be the domestic cow.

“If this trend continues, and all the currently threatened (mammals) are lost, then energy flow and taxonomic composition will be entirely restructured,” said Smith, professor of biology at New Mexico. “In fact, mammalian body size around the globe will revert to what the world looked like 40 million years ago.”

Scientists had long known about the sudden disappearance of large mammals from the fossil records, but it was never clear whether humans, climate change, or a combination of the two were responsible. However, large and small mammals seemed equally vulnerable to temperatures shifts through the studied time span, the authors note, with suggests climate change had little to do with the observed size-specific culling.

“If climate were causing this, we would expect to see these extinction events either sometimes (diverging from) human migration across the globe or always lining up with clear climate events in the record,” said Lyons, assistant professor of biology at Nebraska. “And they don’t do either of those things.”

It’s not just large mammals that are pressured to extinction by humans. The same size-selective pressures are affecting the world’s largest fish, reptiles, amphibians, and birds.

Losing the world’s largest mammals — the products of millions and millions of years of evolution — will pose profound implications for the world’s ecosystems. Large mammals such as elephants tend to be herbivores and have huge ranges over which they devour copious amounts of vegetations. As such, these mammals act like ecological engineers, clearing the land and making way for open terrain such as savannahs. They also dispense nutrients over large distances around an ecosystem. So if big mammals are gone, the smaller ones might follow.

“The kinds of ecosystem services that are provided by large mammals are very different than what you get from small mammals,” Lyons said. “Ecosystems are going to be very, very different in the future. The last time mammal communities looked like that and had a mean body size that small was after the extinction of the dinosaurs.

“What we’re doing is potentially erasing 40 to 45 million years of mammal body-size evolution in a very short period of time.”