A study of 84 reefs along the Great Barrier Reef revealed that one-third of the coral reefs of the central and northern regions have died due to a huge bleaching event. Corals to the north of Cairns, which account for two-thirds of the Great Barrier Reef, are also massively affected with 35 percent to 50 percent dead or dying. 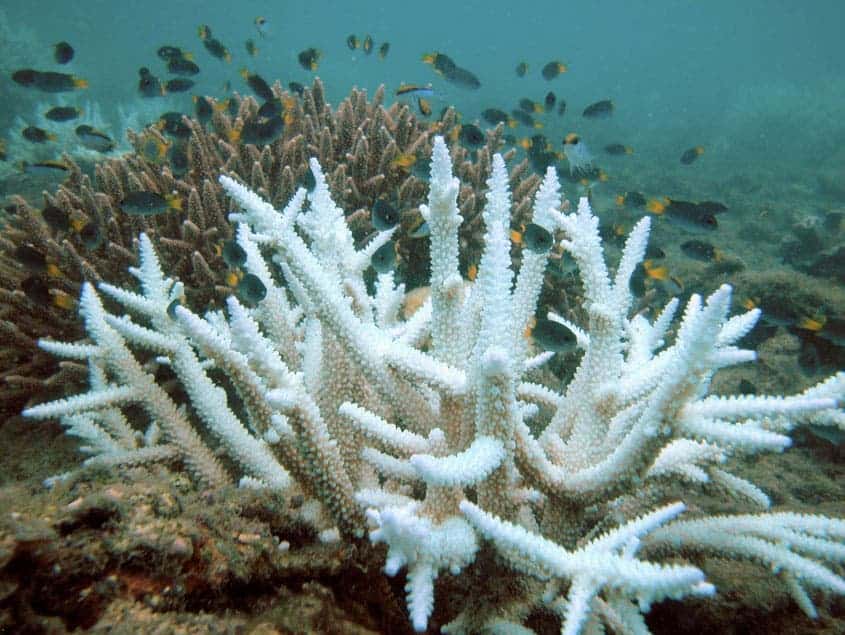 This is the third time in 18 years that the Great Barrier Reef has experienced massive bleaching at the hands of global warming, says lead author of the study Prof. Terry Hughes from James Cook University.  Bleaching occurs when the ocean’s waters become too warm and expel the photosynthetic algae, called zooxanthellae, which live in a symbiotic relationship with the coral. Without the algae, the coral dies and seaweeds take over.

“I witnessed a sight underwater that no marine biologist, and no person with a love and appreciation for the natural world for that matter, wants to see,” said Jodie Rummer from the ARC Centre of Excellence for Coral Reef Studies.

This year, an unusually strong El Nino event caught everyone off guard and led to a massive bleaching event, far exceeded the two previous events in 1998 and 2002. More than half of the Great Barrier Reef has receded in the last 30 years, two-thirds of this decline having occurred since 1998 — the year of the first massive bleaching event.

“It is fair to say we were all caught by surprise,” Professor Hughes said. “It’s a huge wake up call because we all thought that coral bleaching was something that happened in the Pacific or the Caribbean which are closer to the epicentre of El Nino events.”

Some of the dead coral in the northern part of the reef were 50 to 100 years old. For the rest, scientists aren’t sure if these will be able to recover in time, namely to push tolerance past El Nino thresholds.

How much coral can survive the next fourth bleaching event? What about the fifth? The main driver of coral bleaching is man-made global warming and pollution.

Despite the evident vulnerability of the Great Barrier Reef, the UN world heritage committee did not include the reef on its list of sites “in danger”. The UN did, however, list the Great Barrier Reef in a draft report earlier this year but decided to take it down after the Australian government protested. The government has given vague explanations for its interventions, but critics voiced that Australian officials are more concerned with protecting tourism and corporate interests than protecting a unique natural treasure trove.

This latest bleaching event clearly shows that the Great Barrier Reef is “in danger”, despite what some white-collared officials might claim from their ivory tower.

It’s high time the Australian government takes serious measures to protect its greatest national treasure. This means reconsidering the approval of massive new coal mines in Queensland’s Galilee Basin, for instance, or implementing stricter conditions for farming which spews large amounts of fertilizer, pesticides and waste ran into rivers and streams and then into the ocean. There is also an urgent need for more renewable energy in the mix. Australia is pretty good on solar energy, with one in five Australian homes making good use of it. These commendable private initiatives, however, need to be accompanied by governmental support. Right now, however, Australia is taking the opposite route by planning to open more coal mines and coal-fired plants, while blocking renewable energy projects.

Even if Australia would revamp its conservation policies over night, the Great Barrier Reef would still be in grave danger as the past bleaching events have already affected the coral’s capacity to recover. This is why scientists all over the world are working on solutions to boost the coral’s resilience, like breeding super-coral which can survive in warmer, more acidic waters.