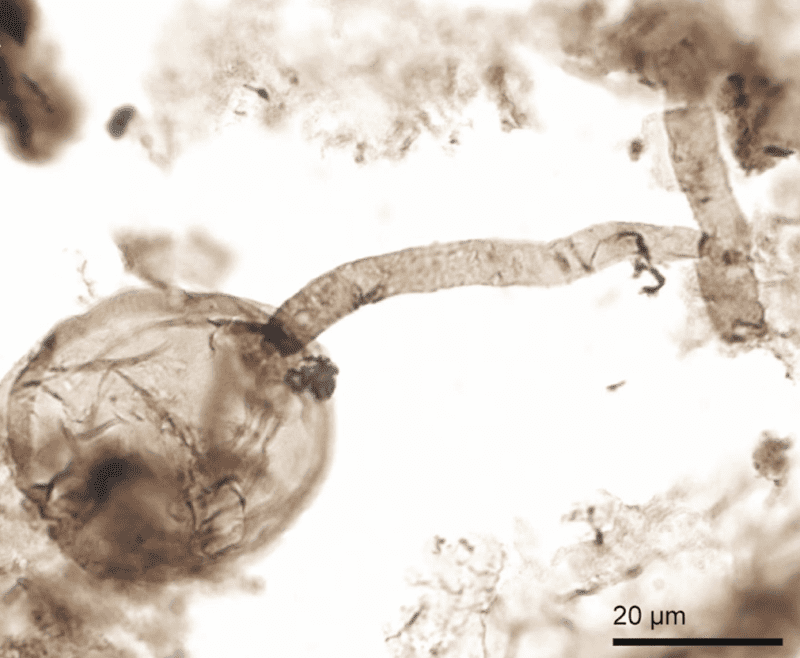 Fossils unearthed in Canada suggests that fungi — organisms that include mushrooms, mold, and yeast — are at least a billion years old. The discovery pushes back the existence of fungi by almost 500 million years and reshapes our understanding of how life on land appeared.

The tiny fossil specimens were found embedded in ancient rocks that are 900 million to 1 billion years old, according to radiocarbon dating. Corentin Loron, a Ph.D. student at the University of Liege in Belgium, knew they were dealing with some ancient fungi after they found evidence of chitin — a fibrous substance that forms on the fungal cell walls.

To reveal the fungal structures, the researchers first had to dissolve the rocks in which they were found with acid. After the minerals were removed, many floating microfossils became visible. These look like a partially deflated balloon with a stalk at the base which is connected to a long tube that links up with other balloon-shaped structures. Modern fungi look very similar, where the balloon structure is meant to hold spores while the tubes allow the organism to grow and expand across a surface. However, the billion-year-old fungi, which the researchers named Ourasphaira giraldae, have a unique characteristic: the stalk branches off at a right angle.

“This means that if fungi are already present around 900-1000 million years ago, so should animals have been,” Loron told AFP.

“This is reshaping our vision of the world because those groups are still present today. Therefore, this distant past, although very different from today, may have been much more ‘modern’ than we thought.”

Previously, genetic studies suggested that fungi first appeared long before animals, about 900 million years ago. This new study agrees almost perfectly with the molecular data. If the dating is indeed accurate, it means we now have a clearer picture of when plants and animals branched off from one-celled eukaryotes.

Another thing that these findings show is that fungi are amazing creatures. Even today, perhaps a billion years later, they’re still incredibly successful. They’re among the most abundant organisms on the planet after plants and bacteria, being responsible for a third of the world’s biomass. All the fungi on the planet are actually six times heavier than the mass of all animals combined.

The study appeared in the journal Nature.