Around 385 million years ago life on Earth went through one of the most spectacular transitions in its history after the first marine creatures started evolving limbs and moved on land. The first tetrapods, however, may have first evolved enhanced vision and only then the limbs required to be successful on land, a provocative new study suggests, citing compelling evidence from the fossil record. 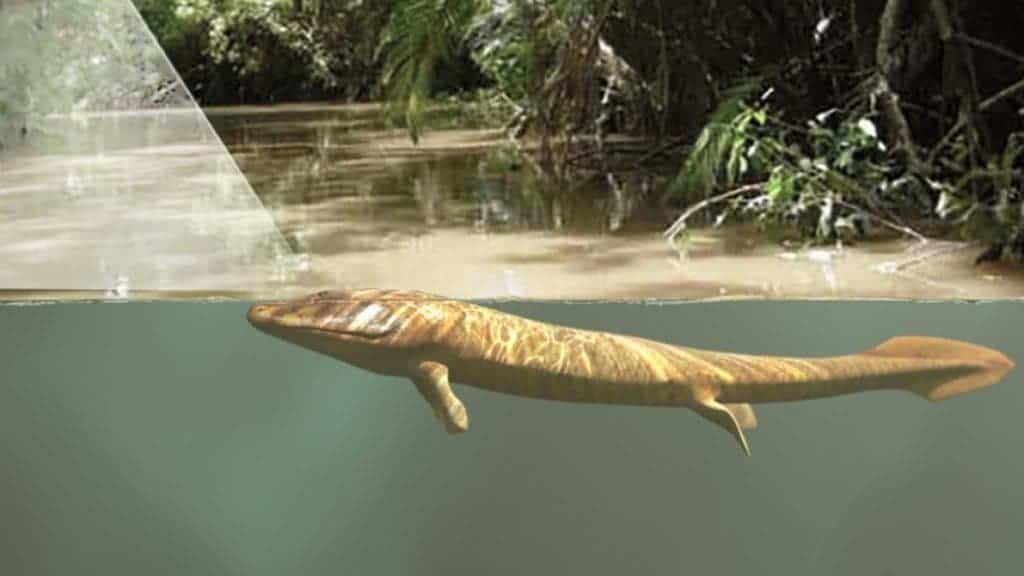 A 3D representation of Tiktaalik — a lobe-finned fish from the late Devonian period, about 375 Ma (million years) ago, having many features akin to those of tetrapods (four-legged animals) — looking above the waterline. Credit: Malcolm MacIver, Northwestern University

By the Late Devonian, marine life was complex enough to make one of its biggest leaps. Extensive terrestrial vegetation and accelerated soil formation which stabilized banks and bottom sediments also made the opportunity to move on land even more enticing.

The leading hypothesis for tetrapod evolution — the first four-limbed vertebrates and their descendants, including the living and extinct amphibians, mammals, reptiles, (including birds), etc. — is that fish became progressively better adapted to terrestrial conditions during prolonged episodes of drought. However, to be able to exploit such an opportunity, the early tetrapod ancestors had to have some biological machinery in place in order to recognize it.

Good eyesight sounds like a must, and a new study involving researchers from Northwestern University and Claremont McKenna, Scripps, and Pitzer, suggests these ancestors first evolved eyes suited for terrestrial life. Only after did limbs emerge.

The team studied 59 fossil specimens which lived before, during, and after the famous water-to-land transition. The researchers measured the orbit size for each fossil as well as the head length to determine both the size of the eyes and the size of the animals themselves. Strikingly, before the transition, the eye sockets were only 13 millimeters in size but around the time of transition or 13 million years later the average length almost tripled to 36 millimeters.

Simulations ran on a computer and reported in PLOS ONE suggest the increase in eye size would be beneficial, and thus realized, only when an animal is seeing through the air, not the water.

Moreover, the eye socket analysis also showed that the pre-tetrapods also started shifting their eye sockets from the side of the head to the top. Combined with a tripling of eye size, the animals now had a visually monitored space that’s superior by a million fold and could see 70 times farther in the air than in the water. 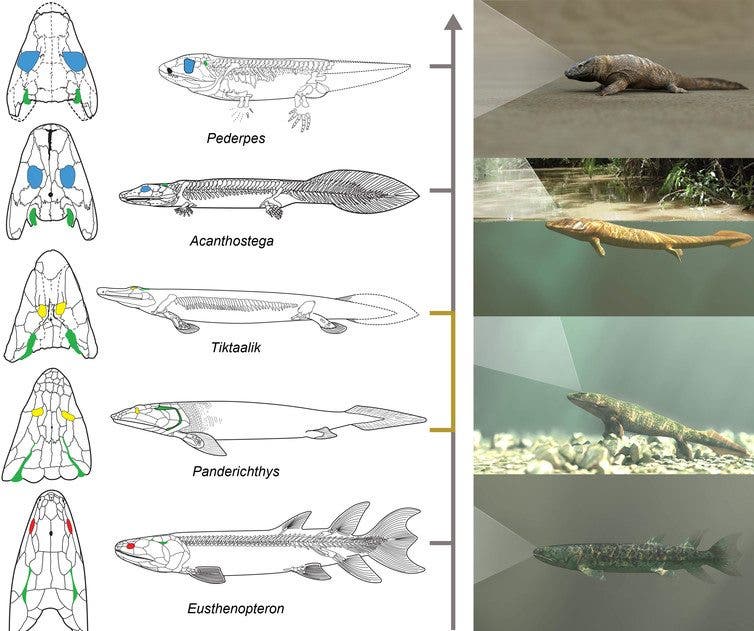 The eye sockets shifted from the side of the head to the top for increased visibility. Credit: Malcom MacIver, Northwestern University.

“Bigger eyes are almost worthless in water because vision is largely limited to what’s directly in front of the animal,” said evolutionary biologist and paleontologist Lars Schmitz, assistant professor of biology at the W.M. Keck Science Department, a joint program of Claremont McKenna, Scripps and Pitzer colleges.

“But larger eye size is very valuable when viewing through air. In evolution, it often comes down to a trade-off. Is it worth the metabolic toll to enlarge your eyes? What’s the point? Here we think the point was to be able to search out prey on land,” he said.

Because larger eyes were selected for and since these are useless in the water, the evolutionary biologists jumped on an informational zip line to conclude its better eyesight that spurred the monumental water-to-land transition. Because of their poor eyesight, fish are mainly reactive animals. Freed of the water’s murkiness, early tetrapod ancestors could now concentrate on improving their cognition and transition from reactive to active — the strategic skill that to this day many terrestrial animals rely on for their survival but which much modern fish still lack.

“Our hypothesis is that maybe it was seeing an unexploited cornucopia of food on land — millipedes, centipedes, spiders and more — that drove evolution to come up with limbs from fins,” lead author Claremont MacIver said.

It’s amazing to think about how our fishy ancestors dared to boldly traverse such unexplored terrain but it’s even more intriguing to see how each piece of the puzzle came together to make it all possible.

One thought on “Enhanced vision, and not limbs, may have prompted fish to become the first land animals”